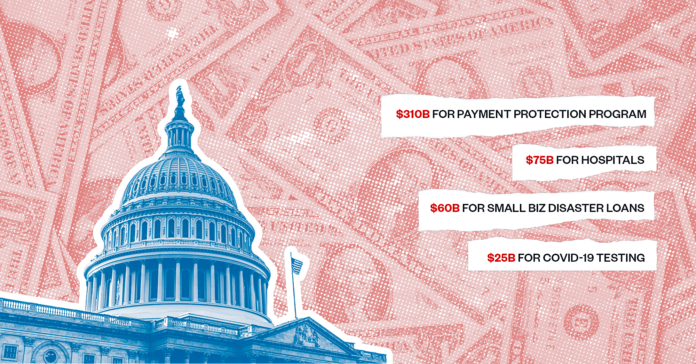 This is the fourth coronavirus spending bill passed by Congress. It addresses some of the holes left by the CARES Act, in particular for small businesses.

One such hole was in the Payment Protection Program, which forgives loans for small businesses impacted by COVID-19 if they continued to pay their employees. The PPP’s $350 billion funds were depleted after only two weeks.

This comes as scrutiny has been given to the structure of the $2 trillion stimulus bill, which allowed for big businesses and the well-connected to apply for and obtain the majority of the initial funds for the program before it ran out.

One such structural issue was how the bill classified small businesses as any company with fewer than 500 employees at any one location. This allowed Taco Cabana to qualify and be approved for a PPP loan and compete with mom-and-pop shops.

Additionally, criticism has been leveled at publicly traded companies that received PPP loans such as Texas-based Ashford Hospitality Trust and Fiesta Mart. The U.S. Treasury Department has asked for those 150 companies to return the funds, which some have already done.

The new law replenishes the Payment Protection Program with $310 billion, of which $60 billion is set aside for small businesses and minority-owned lenders.

According to data from the Small Business Administration, $28.5 billion in loans had been approved for 134,737 Texas businesses. That was the second most in the nation, reports the Houston Chronicle, yet only a fraction of eligible businesses in Texas received the loans. Recent data from the Texas Workforce Commission shows there were 546,000 qualifying small businesses.

Businesses that have existing relationships with banks and in-house accountants were unable to quickly apply for these loans and get approved for them, leaving many behind.

The package also added new funding to the tune of $75 billion for hospitals to reimburse them for losses and expenses due to COVID-19. An additional $600 million was set aside for community health centers and federally qualified health centers as well as $225 million for rural facilities.

To boost testing, surveillance and contact tracing capacity, the package provided $25 billion. This included $11 billion for state and local governments, of which at least $4.25 billion would be allocated on the basis of their relative number of COVID-19 cases and at least $2 billion would be allocated based on a formula applied to  the Public Health Emergency Preparedness cooperative agreement in fiscal year 2019.

And $1 billion was provided to pay for tests for the uninsured.

The CDC was provided $1 billion for surveillance, contact tracing and lab capacity expansion.