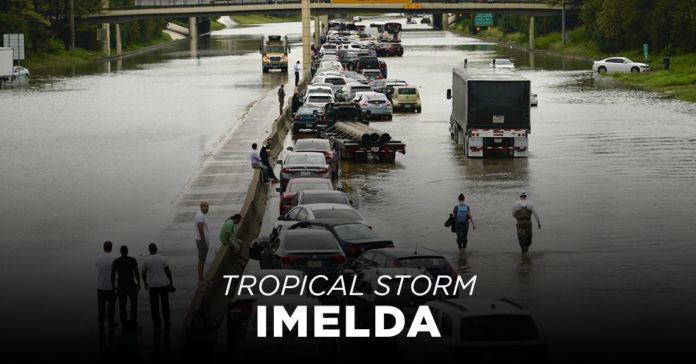 Imelda wreaked havoc on the southeast Texas region causing Gov. Greg Abbott to declare a state of emergency for several counties. Now that hundreds of homes have been flooded, 1,000 people rescued, and five lives lost, what should the state do next?

Some have said that the lack of a “hurricane” classification meant citizens didn’t take the storm seriously. School wasn’t canceled in most areas, and people went to work as planned on Thursday morning.

The attempted normalcy resulted in chaos after businesses sent employees home and highwater and traffic prevented parents from picking up their children. Some students were stranded in schools overnight.

Even after the storm pushed north out of the Houston area its aftermath was still being felt. On Friday, Sept. 20, nine barges broke free of their moorings. One of the boats hit the I-10 bridge over the San Jacinto River, which resulted in the thoroughfare being closed for four days.

Although FEMA has started assessing damage from the storm, there is currently no timeline for how long the assessments will take.

While Houston had some damage, most of the impact was limited to street flooding. Official figures state that about 350 single family homes within the city limits were affected by the water. The flooding was more severe in the unincorporated areas of Harris County where at least 800 homes were damaged by the storm.

As bad as Imelda was for the Houston-area, it was much worse for Beaumont. About 1,000 homes flooded during the storm, according to Beaumont Mayor Becky Ames. Within Beaumont the effects of Imelda are still being felt,

Imelda’s damage wasn’t just limited to large cities, small towns like  Winnie, Hankamer, and Stowell  were hit hard as well. In some places the storm left the entire town under water.

In some of the towns the damage was so severe that almost a week after Imelda, a 10 p.m. to 7 a.m. curfew was still in place.

Charities like Convoy for Hope assisted in humanitarian support, setting up in the aftermath of providing food and water.

What’s been done since hurricane harvey?

In the aftermath of Hurricane Harvey, the Texas Legislature approved a massive recovery package. Along with financial assistance, the state government also passed bills to create state management plans and fund training and leadership development.

The legislature also appropriated money for  loan programs and provided matching funds for federal aid for Harvey relief. While federal funds for Harvey relief has been forthcoming, the obtuse nature of FEMA regulations have left some homeowners waiting for payment for over two years.

Along with funding recovery efforts, the legislature also approved funds for flood mitigation projects. How well those efforts work will take some time to determine.

One of the difficult aspects of trying to determine the efficacy of rebuilding and mitigation efforts is that they are long-term plans funded by a government that meets every other year. Unfortunately, mother nature doesn’t work on a biennial cycle.