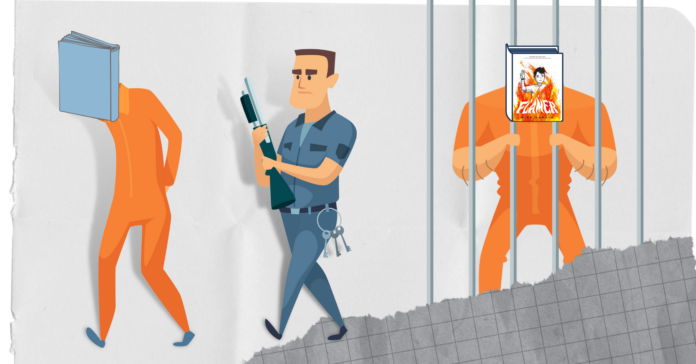 As kids return to school, districts are having to deal with a flurry of book challenges to their libraries, mostly from conservatives.

In March, The Houston Chronicle compiled a detailed list of the challenges that were being made to school libraries. Starting in 2019, when the term “critical race theory” became a catch-all used to oppose teaching about racism, the labor movement, gender identity, and sexual orientation, challenges and bans sharply skyrocket. In 2017, only five books were challenged and none removed. By 2021, the challenges had reached 29 and the removals 19.

A look at the titles that have been targeted reveal a sinister culture war being waged in public schools. Recently in Katy ISD, a parent complaint actually led to a police officer physically removing a book from the shelves after a parent complained it was “harmful.” The book in question was Flamer by Mike Curato, a critically acclaimed and award-winning coming of age story of a gay boy. The parent claimed that depictions of sex in the book made it pornographic. After a review of the material, KISD high school libraries will continue to make Flamer available to students.

Katy has had a number of disturbing challenges from conservative parents. A biography of Michelle Obama was challenged for promoting “reverse racism.”

In Keller ISD, a graphic novel version of The Diary of Anne Frank was temporarily removed from shelves, though the prose version remained available. Once again, a complaint of pornography was behind the challenge. Anne Frank describes her genitals in her tale of living in hiding during the Nazi occupation of Amsterdam. Once again, cooler heads prevailed and te book was unbanned.

Some schools, such as Cy Fair ISD, have attempted to reach a compromise with the angry parents demanding that books be banned from shelves. In that district, parents have the option to prohibit their child from checking out books from the library entirely, though they have ti opt-in specifically for that.

Since last fall, teachers and school librarians have been living under a shadow when it comes to what books can be allowed in schools. The state government essentially put out a hit list targeting books. Those titles are almost exclusively based around diversity. In Prosper, a parent wanted a title about a Black Olympiad who dealt with racism in 1940s Tennessee off the shelves. Eanes ISD was attacked for sticking How to be Antiracist by Ibram X. Kendi on the shelves. A parent group wanted it replaced with copies of The Bible.

Many of the challenges tie in with another conservative crusade, that of accusing LGBT people of grooming children for sexual activity and deviant lifestyles. Many texts about growing up queer on trans have been accused of being pornography, with almost no depictions of heterosexuality in books receiving the same amount of resistance. Coupled with the state’s recent anti-trans initiatives such as sports bans and investigating parents for child abuse if they provide their children with gender afforming care, it appears that conservatives are trying to wipe the existence of trans people from public schools entirely.