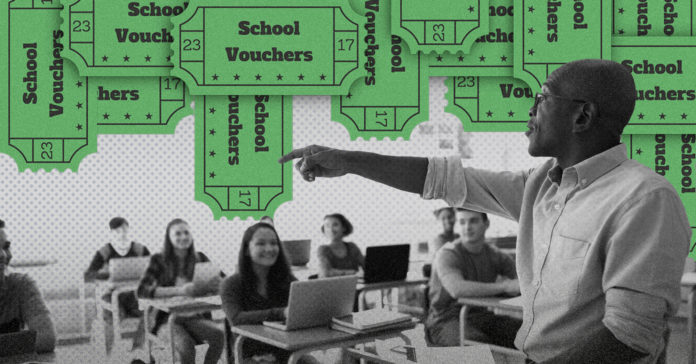 Every legislative session since 1995 a school voucher bill has been filed in the Texas Legislature. A school voucher is any mechanism or scheme that allows public taxpayer funds to be funneled to a corporate or private entity. That could be a private school, a religious school, a home school, or just someone trying to teach kids out of their basement.

Proponents say that this diversion of public monies provides more choice to parents. Opponents point to the questionable moral component of giving public funds to private entities, lack of accountability and transparency, and how vouchers often disadvantage poor kids. If the money is proposed to go to private religious schools they often question the violation of the separation of church and state.

In every legislative session since 1995 the Texas Legislature has repudiated vouchers.

This session, two vouchers have been introduced in the Legislature. The first voucher (HB 1015) was introduced by Rep. Steve Toth (R-The Woodlands) and diverts taxpayer funds to private entities to create a microgrant program for students in the Houston area. The bill was filed on January 7th and has not yet been referred to a committee.

The second voucher, and the one most likely to move, is HB 3 filed by Rep. Dustin Burrows (R-Lubbock). This voucher is part of the larger Texas Pandemic Response Act and it allows private entities to receive public funds through a public school district if that district does not offer full-time in-person instruction. If the district fails to pay the private entity within 46 days the state takes over and pays the money directly. This direct payment constitutes a voucher.

Anyone who has any business experience knows there can be a number of factors that cause a delay in payment and this doesn’t add any value to the bill so many public-school advocates see this as an attack on public schools in a session with very little bandwidth to handle it.

Dr. Charles Luke, the Coordinator for the Coalition for Public Schools, a group of 40 school support organizations, tweeted, “Do we really have time to rehash this? The Legislature has only voted vouchers down repeatedly for 25 years!”

Because of the low number of the bill most advocates in Austin speculate that the bill originated in the Governor’s office and has a high priority and was given to Burrows to carry. Burrows recently defended the bill by stating, “It’s not a voucher bill, it’s a get-your-schools-open bill.” He resigned as GOP Caucus Chairman in 2019 amidst allegations of providing a target list of fellow Republicans to defeat in primary races.

Conservative legislators who ran in 2020 on a pro-public education platform will have a chance to put action behind their words in relation to these voucher bills. Rep. Chris Paddie (R-Marshall) the chair of the House State Affairs Committee where the bill will be heard, has voiced his support for public schools stating on Twitter, “Last session, I passed HB 3 to ensure monumental school finance reform. TX teachers who had <5 yrs experience received pay raises of up to $3,800 & those with >5 yrs received an avg raise of $5,200. You can be sure that my House colleagues & I will continue investing in public ed.”

Rep. Will Metcalf (R-Montgomery) has also voiced his support for Texas public schools, indicating on his website that local schools have “made him who he is.” His website says, “With two daughters in school at Montgomery ISD, Will has a double commitment to making sure our teachers and classrooms have the resources they need to provide our students the best education possible.” Metcalf also serves on the House State Affairs Committee.

Both Republican and Democrat legislators have privately voiced their concerns about the voucher in the bill with some of them indicating that they would not vote for it. As one unnamed legislator said the voucher will likely be killed by a coalition of Democrats and rural Republicans—the same group that has stopped vouchers in the past.

Texans love their public schools and while these legislators understand the strength of support for public education on the stump, it remains to be seen if they will prove this support by either removing the voucher from HB 3 in committee or by voting against it if it makes it to the House floor. Members of the Texas Legislature have plenty to worry about this session with the pandemic, the power outage, funding public schools, and expanding Medicaid. They should not have to be forced to vote on vouchers.

Power and Retribution in the Texas House

Editorial: Will the Legislature Use These Two Bills to Steal $18B...

Will Texas Miss Out on Billions for Schools?

Texas Can Use Federal Stimulus Funds to Expand Broadband