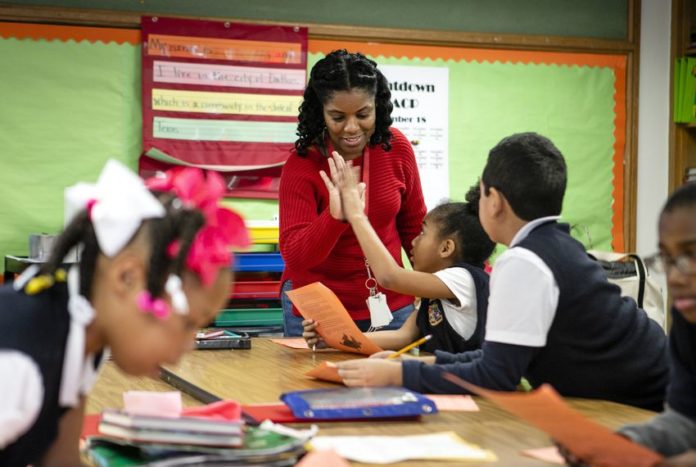 DALLAS — When third-grade reading teacher Natasha Boone told her peers she was considering a job at Titche Elementary School, a chronically low-performing school known for its low test scores and rowdy classrooms, they all asked, “Why?”
But now the Dallas Independent School District teacher is making around $70,000, including a bonus, to work in a school that she’s helped to meet state academic standards, teaching students who wriggle excitedly before answering questions and stand when they want to speak.
Boone is one of more than 400 teachers participating in a Dallas ISD initiative to turn around chronically low-performing schools by flooding them with the best resources for three years — most importantly, the highest-rated teachers and principals. A 13-year teaching veteran, she is earning a salary at Titche higher than that of the average Texas teacher with more than 20 years of experience.
By many measures, Dallas ISD’s Accelerating Campus Excellence or ACE initiative appears to be working, turning around Titche and 11 other schools that were previously failing state ratings — and turning lawmakers’ heads in the process. Republican Gov. Greg Abbott has repeatedly celebrated it as the pathway to getting more top-notch teachers in public schools, and lawmakers will likely include it in some way in the school finance reform measure this session.
But as the state Legislature prepares to discuss how to get other school districts to replicate ACE, advocates and superintendents in other districts are already resisting a program that could use test scores to determine which teachers get more money and opportunity.
And educators in districts different than the ones in massive, urban Dallas ISD question how ACE-like programs would work in their schools. Doug Williams, superintendent of the three-campus Sunnyvale ISD, not so far from Dallas, told lawmakers at a recent hearing that his tiny district is too small to put some teachers on track to a much higher salary and not others.
“We believe that our teachers learn best when they learn from each other and when they share ideas and they spend time together,” he said.
Collaborative planning “would shut down if teachers get into a system where they feel like they’re having to compete against each other for additional funds or additional income.”

Average teacher pay in Texas is in the middle of the pack compared to other states, and experienced teachers report their opportunities for career advancement are limited unless they leave the classroom to become administrators. Lawmakers this session are eyeing potential solutions that could help school districts recruit and retain talented, engaged teachers.
One of the biggest cheerleaders for Dallas ISD’s ACE initiative is Abbott, who has traveled the state touting its success and included it in his own proposal for how to improve public schools.
“We must provide incentives to put effective teachers in the schools and classrooms where they are needed the most,” he said in his State of the State address early last month. “The teacher pay system used by Dallas ISD shows this strategy works. When I visited Blanton Elementary in Dallas, I met an outstanding teacher who was only in his third year and already making more than $90,000.”
That teacher is Josue Tamarez, who is making an $82,000 base salary and enough in bonuses to bring his total pay up to $94,000. But he’s in his eighth year at Dallas ISD, including three years in Blanton Elementary, an ACE school. (A spokesperson for Abbott indicated the governor meant Tamarez had spent three years at an ACE school.)
“I think I was an effective teacher,” said Tamarez, now a teacher at Cesar Chavez Early Learning Center, newly an ACE school. “At the same time, I knew it would have taken me years and years to make a decent amount of money.”
How do you find the most effective teachers to put in front of students in low-performing schools? Dallas ISD uses an existing merit pay system, which rates all teachers based on student feedback, observations of their classes and student standardized test score results. The higher the rating, the more money a teacher makes, with a $90,000 base salary for the highest rated, who are labeled “master teachers.”
District administrators then recruit the highest-rated teachers to their ACE schools, sweetening the deal by offering bonuses of $8,000 to $12,000.

Tamarez is considered an “exemplary” teacher, just below the highest rating. The average Texas teacher with between six and 10 years of experience is making $52,056, according to state data — nearly $30,000 less than Tamarez’ base pay this year.
Educator advocacy groups that oppose incentive pay for teachers worry that rewarding some teachers and not others — especially without an increase in average base pay — would create a toxic environment that prevents collaboration. Some also argue that using standardized test score results to determine salaries promotes focus on test-taking in the classroom.
“We do not believe teachers should be paid based on their students’ standardized test scores, said Louis Malfaro, who heads the Texas chapter of the American Federation of Teachers, one of the loudest critics of merit pay.

Kids “begging to stay in class”

Titche Elementary had failed state ratings for 11 of the last 12 years, despite multiple efforts at improvement, when Dallas ISD administrators decide to implement ACE there last year. Just a quarter of students were reading on grade level in 2017, and even fewer were on grade level for math.
Facing the potential of forced school closure, the district pumped about $1 million into the school to replace 92 percent of its teachers, hire a new principal, beautify the campus, extend the day by an hour and offer free after-school meals to all students. Since then, the percentages of Titche students passing state reading and math tests have soared, bumping the school up from a failing to passing state rating.
After next school year is over, at the end of the three-year ACE run, Titche will no longer have staff bonuses or the extra hour of instruction, but administrators will continue the additional investment in staff and hope the upward trend will continue.

“These schools have really been known to be failed schools. And if you really have ownership in the district, you wanted that to change. You just didn’t know how to make it change,” said Principal Damien Stovall.
Boone was working at a high-performing, majority Hispanic school called Gilbert Cuellar Sr. Elementary School when the district began recruiting teachers from all its schools to start ACE at Titche. Her principal encouraged her to look into the opportunity, believing she had the skills to help students in a challenging environment.
Even with the extra training for ACE teachers and constant feedback from her principal, Boone struggled to acclimate to the new environment. Early on, her third graders felt comfortable walking out of class without permission and roaming the halls, which she quickly made clear was not an option.
“We had a conversation about why it’s important to stay in class and just about safety issues,” Boone said.
Once students realized that acting out wasn’t going to get them released from class, they paid more attention to their lessons. Boone has a knack for commanding students’ attention, changing the lyrics to famous songs and even standing on top of tables to keep them engaged. Eventually, “we had kids begging to stay in class,” Boone said.
Before ACE, just 9 percent of teachers at Titche were scoring high enough on their teacher evaluations to be considered the most effective; this year, more than 70 percent are highly rated. Dallas ISD doesn’t reward just teachers with ACE bonuses; it also rates its librarians, school counselors, support staff and administrators, and recruits the top-scoring ones to ACE campuses.
The bonus made Boone take a look at Titche but it’s not what’s keeping her there now.
“We’re working way more hours than what the bonus says that we should work,” she said.

Can it be expanded?

Even with all its success, Dallas ISD administrators have struggled to keep ACE financially sustainable. This year, they launched their third round of ACE schools, but dramatically limited the number of bonuses available to staff and nixed the extra hour of instruction.
This session, lawmakers are considering providing money to districts that want to replicate Dallas ISD’s program or find their own way to financially reward effective teachers and get them in front of students who need the help most. Already, the program has spread through North Texas, with three other school districts adopting their own version in the last couple of years. None of the other districts use the state’s standardized test to measure teachers — potentially a more viable model for other districts.
But even the biggest ACE evangelists know it won’t work in most Texas school districts.
“The smallest district we’re working with right now planning is about 13,000 students. I don’t know if I’d be able to go smaller than that,” said Garrett Landry, senior officer of education strategies at Commit Partnership, a public-private coalition that has helped oversee ACE’s statewide expansion. “It really just comes down to the number of teachers.”
A smaller district wouldn’t have enough teachers to completely replace staff on multiple campuses, though it could pump resources into struggling schools in other ways, he said. “We never want to decimate one campus to help another.”
Rep. Ken King, R-Canadian, has warned fellow lawmakers on the House Public Education Committee that small, rural schools can’t offer ACE or anything similar. Some of them have just one elementary or middle school, and can’t move teachers around. And their real struggle is recruiting teachers to their tiny, sometimes shrinking communities, with little to offer that Austin or the Metroplex cannot beat.
Williams, the Sunnyvale ISD superintendent, recommended lawmakers allow school districts flexibility to use the funding to improve instruction in the district, so administrators could choose to pilot ACE or pay for extra training for all teachers.
“The concept of taking your best teachers and moving them to another campus really isn’t applicable for Sunnyvale,” he said. “Our parents want the performance of all of our teachers to increase, not just having some teachers who are designated the best.”
But while ACE might not work at every school, educators at Titche say it may have saved theirs. Not long into last school year, as an optimistic group of administrators and teachers started yet another attempt to turn around the school, state ratings showed Titche had failed to meet academic standards for the fifth year in a row.
Students were devastated to learn that their school could be closed, Boone said. So they worked harder.
“We talked about the realities like what’s going to happen if your school shuts down,” she said. “They wanted Titche. They wanted a neighborhood school and they fought for it.”
This story originally appeared on the Texas Tribune. To read this article in its original format, click here.