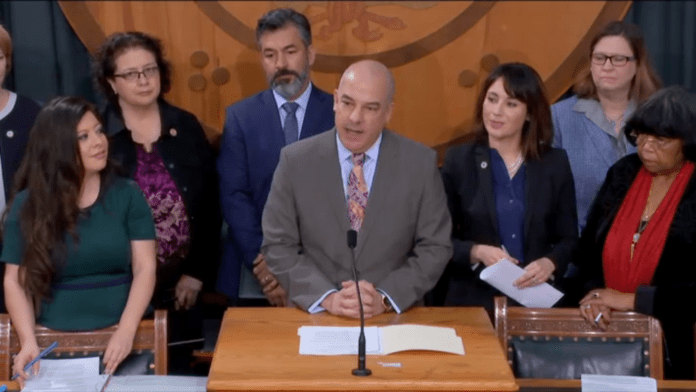 (Pictured from left to right, back: Celia Israel, Ramon Romero, Julie Johnson; front: Mary Gonzalez, Chris Turner, Gina Hinojosa, Alma Allen)
AUSTIN, TX – The Texas House Democratic Caucus unveiled their public school finance plan on Thursday, listing full-day pre-kindergarten (Pre-K), teacher compensation, mental health, special education, and property tax relief as their priorities.
Rep. Chris Turner (D-Grand Prairie), Chair of the House Democratic Caucus, said the plan provides “real solutions for students, teachers, staff” and will give “a true in-your-pocket tax break.”
House Democrats’ plan proposes $14.5 billion in additional funding for public schools.
$1.6 billion of which would fully fund full-day Pre-K. For comparison, the House base budget proposes $9 billion for public school funding, while the Senate base budget proposes $6 billion.
Increasing Teacher Pay
Rep. Alma Allen (D-Houston) said the plan includes a “comprehensive teacher compensation package,” which includes teacher pay, increasing the state spending on health premiums for teachers, and paying for teacher pensions.
Similar to the Senate, House Democrats suggest allocating $3.78 billion towards a teacher pay raise, only the Democrats proposed distributing the funds to more people, including support staff e.g. counselors and bus drivers. This also includes a cost of living adjustment in future budgets, so future teacher salaries reach the national average in “as few as five years,” Allen said.
The Democrats propose a $100 per month increase in health care premiums for teachers which will double the amount the state is currently spending. Additionally, they want to provide a one-time check of $500 to reimburse teachers for classroom supplies.
Allen said $1.5 billion from the “Rainy Day Fund” (Economic Stabilization Fund) should be allocated to shore up the Teacher Retirement System. While the ESF is used to pay for this upcoming biennium, Rep. Donna Howard (D-Austin) said it will be followed up by an investment of the Comptroller’s proposed Legacy Fund in future bienniums.
Mental Health and Fixing the School Finance Formula
According to Allen, the plan addresses mental healthcare for students, one of Governor Abbott’s emergency items. One piece of legislation that exemplifies this focus, Alma said, is Rep. Garnet Coleman’s (D-Houston) bill, HB 2095, which would ensure every school campus can hire licensed behavioral health professional.
Rep. Mary Gonzalez (D-Clint) said changes to the school finance formula include a plan to raise the basic allotment and adjust it for inflation, address outdated weights, and invest further in programs for English Language Learners, economically disadvantaged students, and special education.
All of these ideas can be found in the Commission on School Finance’s recommendations last December, which was heard last week in the House Public Education Committee. Chair Dan Huberty (R-Houston) said the committee will hold hearings on a school finance bill by the end of this month.
Funding Special Education
Texas has been underfunding special education, but even fulfilling the federal compliance of consistently funding special education is a “low bar”, says Gonzalez. The “true cost” of special education ends up falling on local school districts, and this is why Texas must spend beyond merely meeting the federal requirement.
Gonzalez continued, “The current system perpetuates inequality and inequity.”
Property Tax Relief
The House Democrats’ property tax relief plan raises the homestead exemption from $25,000 to $50,000. Rep. Ramon Romero (D-Fort Worth) says this will bring an estimated average of $325 in savings per homeowner per year. The bill has yet to be filed as a constitutional amendment, where it would be put to the voters and is anticipated to cost $1.7 billion. This effort will be tied to an increase in the state share of education, according to Chairman Turner.
Some of the funding for the House Democrats’ plan would come from existing general revenue and the Rainy Day Fund, but Romero suggested additional revenue could be found through a sunset process to examine the tax code, specifically tax exemptions, tax loopholes, and tax credits.
In response to the press conference, House Speaker Dennis Bonnen (R-Angleton), gave the following statement:

“When it comes to educating our children, there is no Republican or Democrat plan. There is only a Texas plan. Partisan division has prevented the Legislature from accomplishing school finance reform in sessions past, and I fully expect all members to stand united behind Chairman Huberty and the Public Education Committee as they introduce school finance legislation in the weeks to come.”