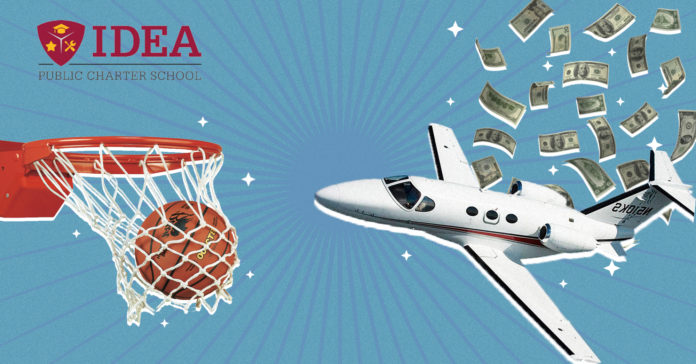 The IDEA charter chain has its eyes set on immense growth, with goals to gain an enrollment of 100,000 students nationwide in the next two years. But the charter champion is receiving major backlash over its extravagant spending and Texas’ lack of oversight.

IDEA Public Schools had planned to spend nearly $2 million per year to lease a luxury jet and has been in the habit of spending hundreds of thousands of dollars on luxury box San Antonio Spurs tickets each season, the San Antonio Express-News reported. More than 1,000 employees have used the tickets, which were given as rewards.

While it’s understandable that IDEA would want to sincerely celebrate its teachers’ hard work, critics such as two education professors — David DeMatthews of the University of Texas at Austin and David S. Knight of the University of Washington — are concerned about whether spending at privately run educational systems in Texas is monitored well enough. Some believe state officials should address this issue of spending and ethics.

Clay Robison, Texas State Teachers Association spokesperson, wrote on the TSTA blog about this topic a few weeks ago.

“The Spurs box and tickets supposedly were used to reward IDEA employees for reaching employment goals and reward students for good academic work, but you will have a difficult time convincing me that state legislators and other public officials also weren’t invited to enjoy the amenities of the luxury suite.”

When asked about the recent backlash, Robison wrote in an email to Reform Austin, “such extravagance from a so-called public school is out of control. It demonstrates how poorly Texas regulates corporate-style charter chains, which are ‘public’ mainly in the sense that they take public tax dollars. Often, it seems the state education commissioner would rather promote charters than regulate them.”

Autumn A. Arnett, vice president of communications at the Texas Public Charter Schools Association also expressed concern over IDEA’s spending but has a different takeaway.

“While IDEA technically did nothing wrong, because the money for both of these expenditures came from private funding and not taxpayer dollars, both decisions were bad calls,” she wrote in an email to Reform Austin.

“However, an equally bad call would be pushing for stronger oversight of charter schools in Texas, which are already subject to really strong financial accountability measures,” Arnett said. “While IDEA is the biggest network in the state, they are far from a representation of the financial capacity of all charter schools, in terms of the resources available to them.”

One reason watching spending is crucial for charter schools is the students they serve. IDEA has a significant enrollment of students with disabilities, which can involve more financial investment.

Charter schools have more flexibility when it comes to structure and curriculum than traditional public schools, although charters are funded by the state.

The Texas Public Charter Schools Association’s website states that there are now nearly 300,000 students attending public charter schools. There are also 141,000 student names on waiting lists. The number of students attending as well as their program participation determine the amount of funding for each charter, according to the Texas Education Agency website. A charter that provides transportation to students receives additional state funds. Charters are not required to participate in the Instructional Facilities Allotment program.

During the 2018–2019 school year, House Bill 21 became effective and according to the TEA website, created a new funding per student in average daily attendance, known as the Charter School Facilities Entitlement.

Arnett encourages Texans to not forget who charter schools serve.

“Missing from the scrutiny is a recognition of the incredible work charter school leaders, teachers, and staff members put in every day to move the needle for some of the state’s most vulnerable students.”

Whether you agree or not, more transparency for charter schools is needed. In the 86th Texas Legislature, there were multiple bills to increase accountability for charter schools at the same level of traditional public schools, but most did not receive any traction. It remains to be seen how much this scandal will affect new attempts for transparency next legislative session.