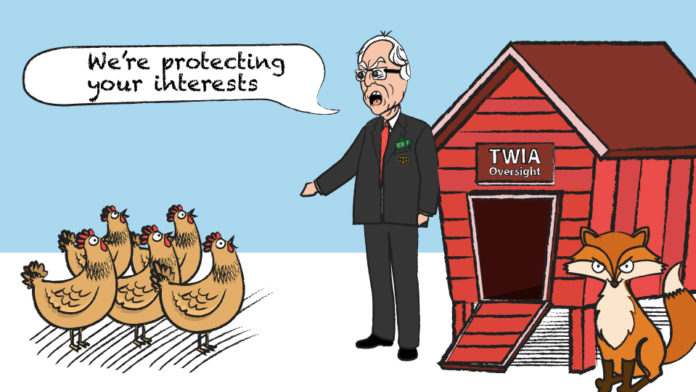 Last month, Speaker Dennis Bonnen (R-Angleton) made appointments for two boards tasked with oversight of the Texas Windstorm Insurance Association (TWIA), the insurer of last resort for hail and windstorm damage for property owners in 14 Gulf Coast counties. The appointments include one prominent critic of TWIA, State Rep. Todd Hunter (R-Corpus Christi), who was appointed to the Windstorm Insurance Legislative Funding and Funding Structure Oversight Board.

The Funding Structure Oversight Board is made up of four members each from the Texas Senate and the Texas House of Representatives. According to Hunter’s press release, the board is “tasked with gathering information on TWIA’s funding, determining how states operate catastrophic risk pools, and holding public meetings to hear testimony on funding for the organization.”

The oversight board will be required to deliver a report on its findings and any legislative recommendations by Nov. 15.

History of Conflict of Interest

Hunter is both an expected and a curious appointment. He has spent the interim and the previous legislative session railing against TWIA and its rate hikes; however, at the same time, he has profited from lawsuits against TWIA. According to a KPRC report, Hunter teamed up with big storm attorneys to sue TWIA over claims.

One coastal property owner interviewed by KPRC said “it appears to be that he is working for himself and not us.”

The director of the Legislative Lawyering Clinic at The University of Texas School of Law, Hugh Brady, told KPRC that Hunter’s dual roles sounded like a “fox guarding the henhouse.” When questioned again about whether there were any conflicts in both having oversight over TWIA while having business before the agency, Hunter claimed there was nothing wrong.

This is not Hunter’s first scrape with ethical issues as it relates to allegations of profiting off the same state agency he oversees. The Houston Chronicle reported in 2011, “[Hunter] got $65,000 as a mediator in the so-called ‘slab’ class-action settlement in 2010 and $8,750 for other windstorm-related cases” while he was a member of the House Insurance Committee and the legislature’s special windstorm oversight committee.

The Texas Watchdog reported that Hunter received a $25,000 contribution from a plaintiff’s lawyer within days of being appointed to mediate a TWIA claims case.

The Legislature sets the basic funding structure for TWIA for paying claims in case of a catastrophe (hurricane, etc.), and it resets every year. The complex layer cake of funding for the quasi-governmental agency is as follows: TWIA premiums; the Catastrophe Reserve Trust Fund (CRTF), an account held by the comptroller containing the net gains from TWIA operations from prior years; debt financing repaid by policyholder premiums, and if premiums are insufficient, policyholder surcharges authorized by the Insurance Commissioner; assessments of member companies; and reinsurance to achieve total funding not less than a 100-year hurricane season.

The issue of funding for TWIA began initially after Texas was hit by back to back hurricanes, Dolly in 2008 and Ike in 2009. The public insurer was slow in its claims response. After which, the Legislature began reshaping the funding structure. In 2013, TWIA was facing $2.5 billion in losses and litigation over how it handled claims.

Hurricane Harvey was the first true test for the Legislature’s overhaul, and a 2018 Sunset report suggested while they improved in many ways, problems inherent to the design of the funding structure persisted. It also said TWIA is “broke, in debt and facing a shrinking revenue pool.”

They pointed out the financial quandary TWIA is in:

“TWIA’s revenue from premiums is not enough to pay future claims, meaning TWIA will likely have to go into more debt if there is another hurricane — further increasing costs to policyholders. At the same time, the Legislature designed TWIA to provide insurance for those who cannot purchase it elsewhere. If TWIA were to regain financial stability through raising premiums, TWIA may become too expensive for coastal residents.”

The Sunset Report made no recommendation on this issue, deferring to the Legislature. Last session, little change was done to the funding structure beyond allowing TWIA to assess member companies for some of its reinsurance costs.

Critics argue that if the premiums are not raised or the funding structure is not significantly changed, the wider public will be at risk of picking up the tab for TWIA.

Senator Larry Taylor (R-Friendswood) was behind the provision creating the funding structure oversight board. On the Senate floor, Taylor said a similar study was done in 2015, the last time the funding structure of TWIA was changed. “There are questions about whether TWIA is funded to an adequate level.” In particular, the Senator pointed out TWIA had been buying more reinsurance than necessary, and that cost was passed on to the policyholders. TWIA maintains it was “the necessary amount to ensure not only that we have an amount of money equal to potential claims, but also the money required to process those claims.”

John Polak, General Manager of TWIA, made the following statement to the Speaker’s apppointments to the oversight boards: “We look forward to working with the members appointed by Speaker Bonnen to these two oversight boards as they develop recommendations regarding the operations, funding, and sustainability of the Association.”