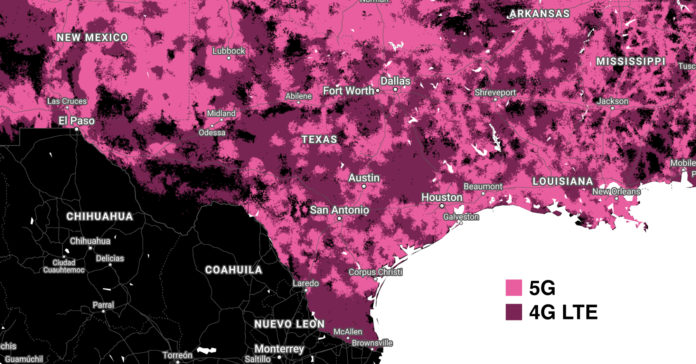 Verizon’s Super Bowl commercial was about humanity, empathy and compassion holding more importance than 5G networks, and it ended by saying “5G’s going to change a lot of things, but thankfully not everything.” The commercial clearly stated it “was about what 5G will never do.”

There are things the upcoming networks will do and not do, and they may make the digital divide worse.

T-Mobile is rebranding itself as The New T-Mobile, and it had a field day over Verizon mentioning its 5G network in a commercial and even thanked Verizon in a post on their website which reads,  “after years of ignoring T-Mobile, even leaving us out of coverage map comparisons … they finally had to admit that we’re the real network competition.”

Texas Attorney General Ken Paxton dropped the lawsuit with several other state attorneys general against the merger shortly before it went to trial, after a settlement based on wireless service price points for Texans was reached. At the time, Paxton announced that T-Mobile agreed it wouldn’t raise prices through the next five years and would expand wireless coverage into rural areas of Texas, The Dallas Morning News reported.

Not much will change for current T-Mobile subscribers, and Sprint customers will eventually transfer to T-Mobile plans. Prepaid Sprint plans will transfer as customers of the Dish Network.

Changes to the telecom industry and its technology are sure to have wide effects. The Pew Research Center found that last year 96 percent of Americans had a cellphone or smartphone. The center’s data states that 81 percent own smartphones. Nearly three-quarters of U.S. adults now own desktop or laptop computers, and half own tablet computers or e-reader devices.

Another report from Pew published a year ago found close to two-thirds of rural Americans, 63 percent, say they have a broadband internet connection at home. This number is up from about 35 percent in 2007. Even though rural Americans are less likely than Americans overall to have home broadband, times are changing and usage among rural adults has increased at a rapid pace.

Paxton wrote a piece for the San Antonio Express-News this month saying that the settlement with The New T-Mobile will benefit all Texans and will support the growing economy, but some are concerned about 5G’s affordability.

Will 5G Expansion Be for All?

You may have noticed the wireless network nodes, or black poles, being placed in your neighborhood, near your workplace in Texas, or co-located on existing poles. Texas Public Radio reported that 5G requires more connection points and small-cell nodes across the area, thousands of them throughout city rights-of-ways and on city-owned poles.

Back in 2017, the Texas legislature changed the rules for right-of-way permits with Senate Bill 1004, which prevented any Texas city from denying wireless network providers use of its public right-of-way.  In an ironic twist, now the bill that made it easier to roll out technology while keeping up with demand is on the table again, and 57 cities across Texas are suing the state. The cities are challenging the law over the rates providers pay the cities to use public property and the permit fees for each network node that the cities are losing out on.

However, more nodes doesn’t exactly mean more access for all.

Angela Siefer, executive director at the National Digital Inclusion Alliance, told Reform Austin that 5G may not be deployed equitably across the U.S.

“The areas that will be last on the schedule to receive 5G (if it all) are rural areas and low-income urban areas. The providers do not dispute this. In the U.S., broadband is a commercial service, not a utility,” she said.

Siefer explained how the digital divide could actually expand with 5G.

“If the reality of 5G turns out to be as transformative as some claim, residents of rural and low-income areas will be left out of those applications. At a minimum, will have a lesser service of health care and education, plus fewer economic opportunities.”

In an era of connectivity, the more of us who are digitally connected the more, Seifer said, “the power of the internet comes from the massive volume of people using it. When certain groups have more access to opportunity than others, the divisions in our country (and in any state) are exacerbated.”

If it’s a digital “survival of the fittest“ against bandwidth speed and what an individual can afford, then it’s not a digital revolution going on but a digital divide.

Smaller cities, most likely in economically deprived areas in Texas, have been offering discounts on wireless network permits to get some of the action, if not with 5G then with any access to WiFi they can get, TPR reported.

Based on a national 5G coverage map on T-Mobile’s website, 5G is clearly present in major Texas cities, but the surrounding areas lack coverage. At the time of this story, areas such as Fredericksburg, College Station, parts of Fort Worth, McAllen, and Pearland don’t have 5G coverage. A lot of Texas is still the same old 4G LTE service.

5G-Capable Comes With a Hefty Price

Even if there were access in lower-income neighborhoods, the cost of accessing 5G would be a factor that some believe creates a digital divide. To use 5G, you need a compatible smartphone, which isn’t cheap.

In a press release announcing the Samsung Galaxy S20 line of 5G smartphones and all the advancements they tap into, T-Mobile’s chief executive boasted about already launching the country’s biggest 5G network, and then announced this is only the foundation layer of the rollout. If you are able to afford it, these phones range in price from $1,000 to over $1,500, close to the cost of rent in a modest apartment in Texas, although the Houston Chronicle reported in early December 2019, that there are “a variety of deals cut down on those costs.”

What about rural areas or cities such as San Antonio? There the median annual income is $28,000 and nearly one-third of its residents are in poverty, according to the census, TPR reported. While advertising is booming, it could be many years before Texas is truly 5G accessible.