The Texas House Committee on Insurance held their first meeting of the 86th Regular Session on Tuesday, Feb. 12. State Rep. Eddie Lucio III (D-Brownsville), who chairs the committee, opened up the meeting and acknowledged this was the first time he will be serving on the committee during his tenure. He stated the purpose of the meeting was informational as no bills had yet been referred.
Lucio serves on the committee with nine other members, Representatives Tom Oliverson (R-Cypress), Greg Bonnen (R-Friendswood), Sarah Davis (R-West University Place), Julie Johnson (D-Carrollton), Stan Lambert (R-Abilene), Dennis Paul (R-Houston), Chris Turner (D-Grand Prairie), and Hubert Vo (D-Houston).
Testifying before the committee were three organizations: the Texas Department of Insurance (TDI), the Office of Public Insurance Counsel (OPIC) and the Texas Windstorm Insurance Association (TWIA).

TDI has several functions. They regulate insurance companies in the state making sure the companies comply with state law, ensure fair competition in the market, provide consumer protection, and administer Texas’ workers’ compensation system.
For TDI, Insurance Commissioner Kent Sullivan testified along with the Chief Deputy Commissioner, Doug Slape. Sullivan opened his remarks by explaining the circumstances of his appointment. The previous Commissioner, David Mattax, passed away in April 2017, and the office was open until Hurricane Harvey hit Texas in August 2017. From then on, Sullivan worked as an interim commissioner until he was officially appointed in mid-October.
Sullivan is the fifth insurance commissioner in seven years. The turnover rate has become an issue of continuity in the Department, which Sullivan said he has sought to change by making long-term reforms.
Sullivan explained how Texas is the second largest insurance market in the country, and the eighth largest in the world. In 2017, Texas insurers collected $160 billion in premiums and they paid out $134 billion in claims, a 47 percent increase over the previous five years. TDI now oversees 2,800 insurance companies and 630,000 agent and adjuster licenses, a 33 percent increase over the prior 5 years.
TDI’s budget is self-leveling, which means that all appropriated funds to TDI are refunded by maintenance taxes levied on insurance companies working in Texas. Asked later by Chair Lucio about the effects of budget cuts by the state, Sullivan explained how the self-leveling protected TDI.
Every state agency testifying before the Legislature typically presents recommendations for appropriations and proposed legislation to help them better serve their mission. One of TDI’s recommendations was related to how many people who ought to have flood insurance coverage often do not. This became apparent after Hurricane Harvey. As a solution, TDI proposed disclosure reform, specifically disclosing whether flood damage is covered or not in property insurance policies.
Separately, TDI provides mediation services between insurers and providers for certain health insurance plans for patients. Commissioner Sullivan testified TDI only has jurisdiction over 16 percent of all health insurance plans. As a result, a lot of the calls from customers have to go through a lengthy screening process ensuring whether TDI even has authority to mediate on the customer’s specific health plan or whether they need to be sent to another agency such as the Texas Health and Human Services Commission.
On Tuesday, Texas Tribune reported on a 4,000 case backlog in mediation requests on surprise medical bills, otherwise known as balance billing, which happens you get a bill from a provider who is not part of your health plan’s network. This happens very often when patients go to an in-network emergency room but are treated by out-of-network doctors.
Rep. Sarah Davis raised this very issue to TDI’s associate commissioner of customer operations, Chris Herrick. He explained  how the Commissioner acted on the backlog last fall by hiring eight more staff members to handle mediation requests and changing how the Department handles management and process of the requests. Herrick testified the backlog now sits at 2,900 and a majority of the 4,000 are already in process starting from when TDI enters their request to the Department sending letters to providers and insurers.
The Tribune also reported how the number of mediation requests is expected to double in 2019 to 8,000. In response to a question by Rep. Chris Turner about TDI’s capacity to meet the increasing demand, Commissioner Sullivan said two additional positions for mediation will be added by the Department.
Sullivan also testified how in the aftermath of Hurricane Harvey, some customers waited 30 minutes or more to reach a person on the TDI call center. The Department has since made reforms to improve their capacity to handle periodic spikes in demand for agency services, which has led to the current waiting time being no longer than five minutes. Sullivan reported TDI answered 400,000 calls last year and helped Texans receive $43 million in additional claim payments or refunds.
Rep. Greg Bonnen asked about the impact of Hurricane Harvey on property and casualty insurance. Commissioner Sullivan responded there were a quarter of the complaints after Hurricane Harvey as compared to after Hurricane Ike, largely due to improved technology in communications allowing Texans to be able to call their insurance company or agent immediately after being hit by the Hurricane.
Sullivan further testified Texas has not pursued Section 1332 waivers, which regulate the private health insurance market within the boundaries of the ACA to fashion a new coverage system customized for local context and preferences, since being given the authority last session under SB 2087. He claimed the reason was there were no federal funds available to provide transitional resources to facilitate the waiver request.

OPIC, which was created in 2011, has three core functions on behalf of Texas consumers: acting on regulatory matters before the TDI, engaging in consumer education and research, and serving as a resource for the Texas Legislature. They serve as the consumer advocate on insurance rates and policy forms, on which TDI rules.
Testifying for OPIC was Public Counsel Melissa Hamilton. OPIC is paid for by a 5.7 cents assessment tax on certain insurance plans and an inter-agency contract with TDI.
Regarding consumer education, OPIC produces bills of rights for homeowner, auto and life credit insurance. Hamilton testified OPIC has revamped their website to make it easier for consumers to seek assistance on insurance plans.
In the past year, OPIC reviewed 1,500 actions and their work has saved $2 million for Texas consumers. One of the recommendations OPIC brought to the committee was one step further than TDI in disclosure reform to address low flood insurance coverage. They suggested to put the disclosure on the application, the point of sale.

TWIA is a non-governmental agency set up by the Texas Legislature in 1971 to be the insurer of last resort for hail and windstorm insurance to property owners on the seacoast territory of Texas, covering the following counties: Aransas, Brazoria, Calhoun, Cameron, Chambers, Galveston, Jefferson, Kenedy, Kleberg, Matagorda, Nueces, Refugio, San Patricio and Willacy.

TWIA is not funded by the State but through a layer cake of revenue sources as dictated by the Texas Legislature, most recently in 2006: TWIA premiums; the Catastrophe Reserve Trust Fund (CRTF), an account held by the Comptroller containing the net gains from TWIA operations from prior years; and debt financing in Class 1, Class 2 and Class 3 bonds, the latter two of which  is independently financed through surcharges in TWIA policyholders for and surcharges to all policyholders including those who are not TWIA policyholders.
TWIA Commissioner John Polak, who has held the title since 2011, testified before the committee. He explained the recent growth of TWIA in size in response to increasing demands in the market. In 2009, TWIA had 26 employees, and following Ike, they received 100,000 claims. As a result of TWIA’s investment in experience and automation, Hurricane Harvey did not trouble TWIA.
According to Polak, 1,700 of the more than 76,600 claims related to Harvey are currently outstanding. Complaints and litigation to TWIA went down from 10 percent following Ike to four percent following Harvey.
Since 2010, TWIA has been audited 61 times, in part due to being the insurer of last resort.
Rep. Paul had concerns about TWIA’s recommendations regarding WPI-8, the certificate of compliance for ongoing construction to improve properties. He asked Commissioner Polak if TWIA wants to eliminate requirement for TWIA to do these inspections and issue certificates. Pollock answered TWIA is not against the compliance requirement but believes the inspection is improperly placed with them because they have no regulatory authority. Polak testified TWIA issued 20,000 certificates last year, and more than half of them were not TWIA policyholders.
Chair Lucio discussed that a goal of this session would be to look at the complex structure of TWIA’s funding and exploring potential reforms.

Fears of Coronavirus Stir Up Racism in Houston, but They Don’t Have To

By Isobella Harkrider Right after the Chinese New Year at the end of January, rumors flew of possible coronavirus cases in Houston’s Chinatown. Although the 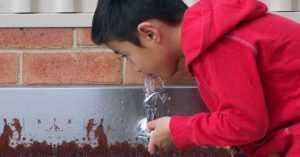 Lead May Still Be in Texas Schools’ Drinking Water. Here’s How You Can Help Keep Children Safe.

By Reform Austin Staff Texas is still not doing enough to protect its students from lead contamination in school drinking water. Back in January 2019,