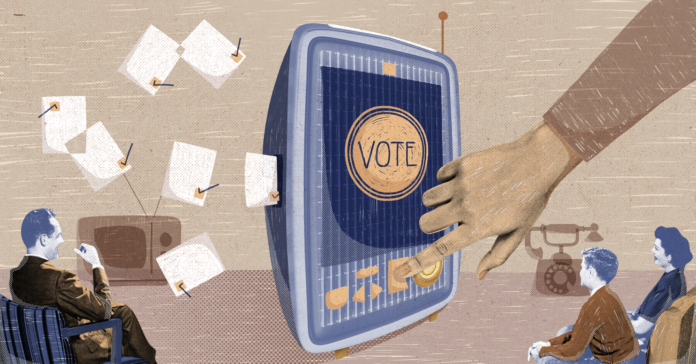 With the primaries imminent and the general election looming in November, it’s time to take stock of the mechanics of Texas voting. Literally, the mechanics. How do we vote, who runs the machines, are they secure, and is it time for a change?

There was a lot of concern in 2018 after accusations that machines were changing votes when voters would use the straight ticket option. Some of the voters who had turned out for the high-profile battle between Sen. Ted Cruz (R-Texas) and Beto O’Rourke (former Democratic congressman from El Paso) noticed that their summary ballots given at the end of the process were different. Some left options blank or reversed voters’ choices. It got a lot of hype, though the Texas Secretary of State reported that only about 15-20 voters were affected, most of whom were able to use on-site aid to fix their ballots.

The whole thing was chalked up to user error in the end, with voters hitting enter then using what we here at Reform Austin call the “spinny wheelie thing” at the same time. A main problem is that Texas, like a lot of states, is using very outdated technology. The machines are made by Hart InterCivic of Austin, and most of them are nearly twenty years old. They were purchased in 2002 thanks to a generous federal program put in place following voting irregularities in the 2000 presidential election.

The Hart machines use eSlate, which was last updated in 2009. It has something of a history of dysfunctionality. Researchers at Rice University did a study of voting machines in 2017, and they ranked the lowest in ease of use of the six systems they studied. A whistleblower inside Hart sued the company for fraudulent statements about the systems, though the suit was eventually dissolved. As of 2018, both the Texas Secretary of State’s office and Hart continue to assure people that the machines do not switch votes.

Nonetheless, serious concerns about the security of Texas votes remain in place. The ACLU sent a letter to Harris County Clerk Dianne Trautman last year listing their specific areas of worry regarding the process.

In 2018, the Senate Intelligence Committee found significant weaknesses in Direct Recording Electronic (DRE) systems like Hart’s. While the committee found that no votes were actually changed due to outside influence, such as the Russian hacking operations of the 2016 election, they did note that because of a lack of paper trail from the DREs it was difficult to audit or assess any allegation of election tampering. They recommended that machines that print paper receipts have no Wi-Fi capabilities. None of this can be implemented with Texas’ current machines. It will have to involve whole new ones.

“The fact that your machines are nearing their manufacturer-recommended lifespan only makes matters worse,” said the ACLU in its letter. “Aging equipment increases the cybersecurity risk because older systems fall well behind the current state of the art in cybersecurity measures, and software or the operating system used to run the systems may no longer be receiving security updates.”

At least one Texas district is moving forward with an eye toward more secure elections. Grayson County is trading in its old iVotronic machines for new ones that print a paper ballot that can be reviewed by the voter and then scanned in their presence, making a much more reliable paper trail than is currently used by the majority of the state. The cost of the new machines is $1,287,234, and they should be delivered in May — in time for the upcoming general election. Whether other Texas districts follow in Grayson County’s footsteps remains to be seen, though time is essentially up to prepare for November.