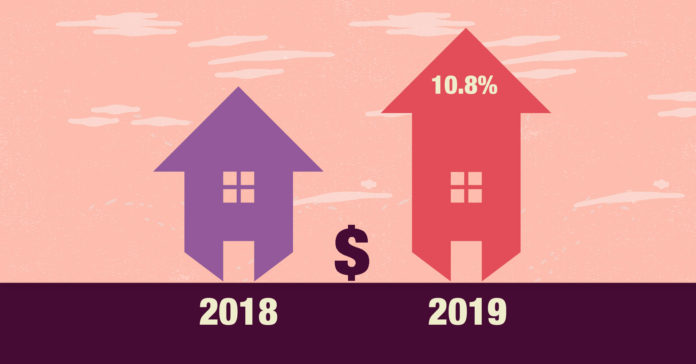 Statewide property values increased last year, on average, by a staggering 10.75 percent, according to the Texas Comptroller’s preliminary findings for 2019.

This is greater than the 7.5 percent increase from 2017 to 2018 and the Legislature’s own value growth estimate of 5.76 percent in the state budget.

As some experts predicted, appraisal values in Texas are rising at a greater rate than tax rates are decreasing, minimizing the impact of the tax relief state leaders were promising since the end of the last legislative session.

Between the school finance bill that cut property tax rates and the property tax reform bill which limited future growth of them, 2020 is the first year the Legislature’s plan for tax relief kicks in. Last year, lawmakers estimated the former bill would lower school district property tax rates by an average of 8 cents per $100 valuation in 2020. One estimate given at the time showed that for the owner of a $250,000 home, the annual tax savings would be $200 in 2020.

Sheryl Pace, senior analyst at Texas Taxpayers and Research Association, told Reform Austin that the difference in the appropriation and actual property value growth will be made up by school districts’ tax levy. This means the more appraisals grow, the less state aid a school district receives, which is made up then by local property taxes.

School districts have 40 days to protest the preliminary findings if they are incorrect. Final certified values by the comptroller will be released in August. By then, school districts will already have set and collected property taxes.

It remains to be seen how much tax relief there will be, if any, this year and what final appraisal values and tax rates will be. If the preliminary findings hold for the final values, Pace said, “it will more than likely reduce overall tax relief that we were looking towards with rate reductions.”

While the state is applying a compression percentage of 93 for 2020 across the board, beginning Sept. 1, individual district value growth will be considered in tax rate reduction.

The values the comptroller released will be used for school funding formulas this year; however, school districts already have 2019 values they received from their appraisal districts and have collected taxes on those values.

Another change from House Bill 3 was that school districts’ share of the cost is being determined by the current year property values, instead of prior-year certified values from the comptroller. This means the Texas Education Agency will not have the final values until August, which means they will set up whatever the difference ultimately becomes.