Home Education “It’s Insane That This Is Not Even Up to Me”: International Students...
Facebook
Twitter
Email 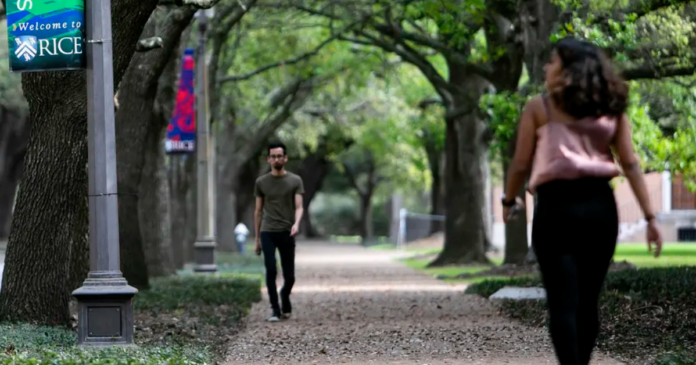 When University of Texas at Austin senior Stephanie Flores-Reyes checked her fall courseschedule earlier this week, she was shocked to see all five of her classes were slated to only be online. But as an international student from Mexico who spends the school year here on an F-1 student visa, it could suddenly be problematic for Flores-Reyes to be enrolled only in classes that meet online because of the coronavirus pandemic.

On Monday, U.S. Immigration and Customs Enforcement announced that nonimmigrant F-1 and M-1 visa holders in the United States under the Student Exchange Visitor Program will not be allowed to enter or stay in the country if they are attending American schools that will offer only online classes this fall. Instead, they must either transfer to a school with in-person instruction or “potentially face immigration consequences,” according to a release.

For students attending schools with hybrid plans, the category most Texas universities will fall under as they forge ahead with a mixture of in-person and online classes this fall, colleges must certify to ICE that the students are enrolled in the minimum number of classes required to progress through their degree plans at a normal speed — and that they are “not taking an entirely online course load” this fall.

Flores-Reyes chose her courses carefully in order to graduate on time next May. She doesn’t want to budge from her schedule, which could potentially delay her degree progress, but having all online classes means she can’t return to the U.S.

“It’s insane that this is not even up to me,” Flores-Reyes said. “I can’t make those decisions. If I’d known, obviously I would have chosen in-person classes.”

On Wednesday, Harvard University and the Massachusetts Institute of Technology filed a lawsuit against ICE and the Department of Homeland Security, seeking a temporary restraining order against the policy. Harvard announced its move to full online instruction for the 2020-21 academic year earlier this month. No Texas university has yet said it has similar intentions.

“We urge the administration to rethink its position and offer international students and institutions the flexibility needed to put a new normal into effect and take into account the health and safety of our students in the upcoming academic year,” the American Council on Education said in a statement.

The move also has some higher education experts worried about what will happen if more classes get pushed online, even if a school is designated to be hybrid.

“The online-only rule is a good one, if it allows international students to enroll, take classes and not have to come to campus,” said Michael Olivas, the former director of the University of Houston’s Institute for Higher Education Law. “But … there’s a tidal wave of online classes coming our way, to hybrid schools. And if the international students that are here have to return to their home country midway, that’s going to be bad.”

Olivas said the hope is that if universities transition to online-only classes midway through the semester, ICE will be flexible and implement special-circumstance rules similar to those that helped the same group of students when the pandemic swept the country earlier this year.

But Student Exchange Visitor Program documents indicate that may not be the case.

ICE’s decision could potentially alter fall plans for thousands of international students in the state. At UT-Austin alone, there are more than 5,000 international students, according to the school’s international office. Spokesperson Fiona Mazurenko said in an email that staff members are working to respond to and support students with the limited information they have received, but declined to comment on how situations like Flores-Reyes’ would be handled.

“We continue to advise all F-1 students to enroll in classes designated as in-person or web-enhanced,” Mazurenko said in the email.

On Wednesday, University of Houston President Renu Khator said in a tweet that the university would work with international students to support their education.

“As a university with global footprint, we deeply value what international students bring to our classrooms, research labs and to the campus in general,” she said.

Some Texas faculty members are considering taking matters into their own hands. David Arditi, a sociology professor at the University of Texas at Arlington, said he would do an independent study course for international students so that they could have the requisite in-person instruction required to stay in the country.

Arditi said he would not be compensated for the independent study course. He views this as a necessary way to protect international students – an “already vulnerable” group.

“In normal circumstances, I’m protective of my time,” Arditi said. “But this is a horribly repressive system. … We have to step up and find alternatives.”

Flores-Reyes would prefer to return to Austin, where she rents an apartment still stuffed with her belongings. She hasn’t been able to cross the border to retrieve anything since she fled in March to Nuevo Laredo.

Now she is looking to speak with her international adviser to plan her next steps, all while dealing with an unfamiliar set of constraints.

“I had no idea this was going to happen,” Reyes-Flores said. “Now is not the time to be enforcing these rules.”