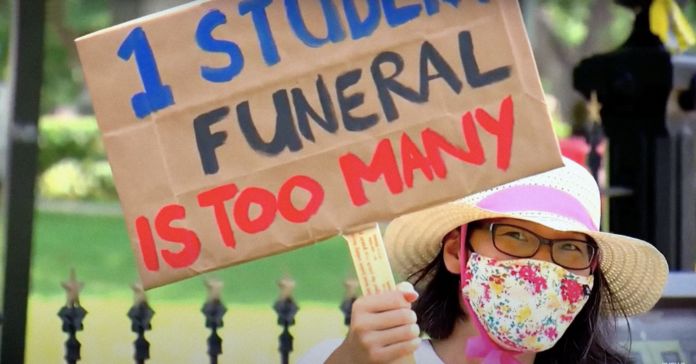 The Texas Education Agency’s decision to let school districts delay on-campus instruction for up to eight weeks is regarded by teacher groups as a good first step that needs to be followed by other safety-driven actions.

“A tidal wave of teachers opposing dangerous reopening plans has knocked back the reckless push to open our schools,” said Texas American Federation of Teachers President Zeph Capo on Monday.

“But it’s not a question of how many weeks until on-site instruction is the norm. It’s making safety, and not politics or the economy, the top priority for our students and teachers in every decision,” Capo said.

Now schools can plan for four weeks and also an additional four weeks of virtual learning if needed.

“The eight-week block of remote-only allowed by TEA is helpful, because it’s an immediate step districts can take in their planning. But let’s be clear, that a trend of at least 14 days showing decreasing infections, test positivity rates, transmission rates and other metrics will be needed as a starting point for planning any start dates for on-site instruction.” Capo said in a statement.

“The state needs to stop setting artificial deadlines for school reopenings,” Clay Robison, Texas State Teachers Association spokesman said on Monday. “The pandemic is still raging, and no one knows when it may subside enough to think about opening school buildings. The new TEA guidelines require districts to open classrooms for in-person instruction if parents ask for it — even during the first four weeks of school. This means some teachers will have to go to campuses even if they fear it will endanger their health.”

Robison said the governor needs to issue an order that there will be no in-person instruction until it is safe for schools to reopen under strict safety standards.

“This must be decided on a district-by-district level in consultation with educators and health experts. In the meantime, all instruction must be remote with no financial penalties to school districts,” Robison said. “The state and districts must provide computers and all other necessary resources to students who don’t have them at home. For the foreseeable future, it will not be safe for anyone, student or teacher, to be in a classroom.”

The TEA guidance released on Friday states that, “in order to facilitate a safe, effective back-to-school transition process, during a period up to the first four weeks of school, which can be extended by an additional four weeks by vote of the school board, school systems may temporarily limit access to on-campus instruction,”

A week ago, the Houston Federation of Teachers and other Houston educators and community groups released their recommendations for reopening Houston public schools urging schools start with virtual learning.

The new TEA rules mean districts may be revising their original plans to reopen schools this fall, as the new rules from the TEA may allow more time for schools to work out how this year will look.

If a family doesn’t have Internet access or access to devices for remote learning at home, they are still entitled to have their student receive on-campus instruction each day during this transition period, the guidance also states. However some parents opting for their student(s) to attend school in-person still may be required to start the school year with virtual instruction temporarily, the guidance explains.

To get credit for a class and be promoted to the next grade, a student must attend 90% of the days a course is offered. And this year, virtual coursework counts as attendance.

If a parent wants to switch their child from on-camps to online learning or vice versa, a parent must commit to one full grading period.

Higher education advocates are also calling on Gov. Greg Abbott. The Texas Faculty Association, an affiliate of the Texas State Teachers Association is urging Abbott to keep his mandatory statewide mask order in effect for the fall semester and order all colleges and universities in Texas to follow it, according to a news release issued Monday.

“We are in the middle of a health crisis that shows no sign of abating. If universities reopen campuses too soon, the pandemic will worsen, much as it did after Gov. Abbott prematurely reopened Texas restaurants, hair salons and other businesses,” said Pat Heintzelman, president of the Texas Faculty Association. “We must avoid repeating that disaster, she added“.
Here’s more coverage on teachers weighing risks of resigning and also virtual learning.