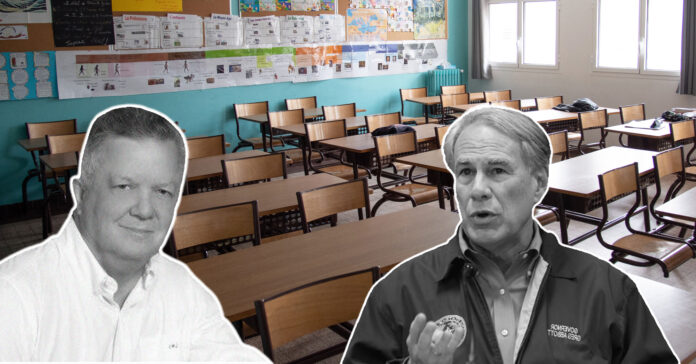 In a recent panel discussion, Rev. Charlie Johnson, the executive director of the Pastors for Texas Children, said that there was “no political will” in the Texas House to push for a school voucher system despite many in the Republican Party stating it should constitute the next big conservative push.

Johnson minced no words at the event that also included  Casey Boland, US History Teacher at Lake Highlands HS, and former Richardson ISD superintendent Dr. Jeannie Stone. The panel was convened to talk about regressive policies and book bans pushed under the guise of opposing critical race theory. Near the end of the event, Johnson linked those efforts in Republican politics to a possible school voucher system that served corporate interests.

“It’s a matter of historical record that political operators funded by Charles Koch identified Critical Race Theory as a political strategy. His name is Christopher Rufo, and…and… Koch and Libertarian money that wants to privatize public education for market gain knew that this could create enough chaos in the midst of COVID to advance that political strategy.”

In conservative politics, the idea that parents should have more choice over what their children learn is a popular one, and it’s led to the stripping out of discussion regarding white supremacy or LGBT issues all over the country. However, the next step, instituting a voucher system to funnel taxpayer money to private schools, has been decidedly less popular despite pushes from groups like Club For Growth.

The issue has started something of an internal fight between Governor Greg Abbott and Texas Senator Ted Cruz. Cruz has begun fiercely advocating for voucher programs while the governor has waffled on the subject. The two are currently waging a proxy war through dueling endorsements of run-off candidates.

“Even the governor is backing off,” says Johnson. “As soon as he went up there to North Fort Worth and trucked out that parent choice thing, you know, my phone was lighting up from rural house members. ‘Pastor, take a breath. Just got off the phone with the governor. He ain’t gonna push a voucher bill.’ Well, we’ll see about that.”

Johnson declined to comment on which members specifically called him and assured him the governor was not pushing vouchers. Greg Abbot said on Twitter that he did not even know who Johnson is.

“Ted Cruz, who knows the voucher is not gaining traction.,” says Johnson. “Ted Cruz has come out with this big public thing endorsing the voucher and positioning himself against Greg Abbott. We’ll see where this goes in the Republican Party, but there’s no political will in the House for the voucher.”

It’s likely that Johnson is right. Rural school districts are often the largest employers in the community and are essential to the financial well-being of the area. Their activities, most famously high school football, form the beating heart of the area. These districts rely on government funding, something that is likely to be lost if more students are shunted to Libertarian-leaning ideological private schools that poor rural Texans can’t afford.