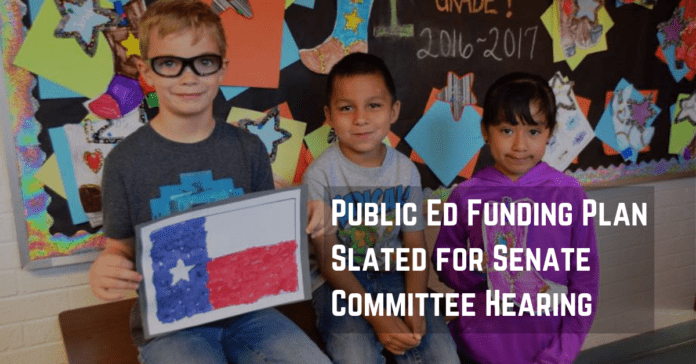 AUSTIN, TX – The Senate laid out the framework for its plan to address school finance reform and public education funding during its first committee hearing of the session —  a full three weeks after the House cleared their own plan, House Bill 3. Senate consideration was postponed in order for Gov. Abbott and Lt. Gov. Dan Patrick to first pass SB2, their property tax reform plan, in the Senate last week.
With only a day since the nearly 300 pages of committee substitute for SB 4 were released, many of the witnesses testifying today, including some of the Senators on the committee, have only a preliminary understanding of the full scope of the bill. As such, Chair Larry Taylor (R-Friendswood) announced the Senate committee will hold more hearings on the bill in addition to the Senate’s plan to advance a revised version of HB 3.
Previously, the introduced version of SB 4, filed right up to the deadline for bill filing, contained blanks in place of where numerical values would be for several key parts of the school finance formula.
As such, few districts knew how they would fare under the plan. With the runs slowly coming out, here is what we know about SB 4 and what it contains:

Other noteworthy elements of the plan is a 15 cent compression for school property taxes compared to the 4 cent compression in HB 3. On this subject, Chair of the Senate Property Tax Committee and Education Committee member Paul Bettencourt (R-Houston), raised his objections to the state leaders’ plan to do a one cent sales tax swap to buy down property taxes in addition to plans for tax compression and increasing the homestead exemption. Lt. Gov. Dan Patrick distanced himself from Bettencourt’s comments during the committee meeting on Twitter.
Senator Kirk Watson (D-Austin) had some questions about SB 4’s financial transitional allotment, which would provide funding to make up any losses to school districts transitioning into the new formula. Differing from previous hold harmless provisions, SB 4’s plan has a five-year expiration date.
Another contrast with the House is SB 4’s use of current year property values for school finance formulas instead of prior year values, which are certified by the Comptroller. The Texas School Coalition, which represents recaptured school districts, raised concerns of the lack of predictability of uncertified current year property values when making their own budgets. The Equity Center also raised concerns on the instability and inaccuracy of current year values. They suggested an alternative, current year property tax collections, if accuracy of the school finance system is the goal. Chair Taylor appeared to be insistent on keeping current year property values in the bill but wanted to figure how to reduce the negative impact of it on schools.
The House included $1,850 in pay raises for all school employees, including teachers, through the basic allotment. This differs from the Senate’s plan to give a $5,000 pay raise to all teachers and librarians.
Testimony on the bill was mostly neutral, but on the provisions of merit pay and outcomes based funding, there were witnesses in favor and against their inclusion. In response to a concern raised during testimony of HB 3 in the House, SB 4 prohibits statewide tests like STAAR from being too heavily used for teacher ratings under any merit pay system.
Steven Aleman of Disability Rights Texas testified in support of the attempt in SB 4 to cover Texas’ $223 million shortfall in special education funding, but felt the language of the bill could be tightened. He also said there needs to be a long-term fix on how Texas funds special education, a concern he raised earlier in the session with the House Public Education Committee.
During testimony, Chair Taylor said Senator Jane Nelson (R-Flower Mound) would offer an amendment on the floor to add the Gifted & Talented allotment back into HB 3. A similar measure failed on the House floor.
Public testimony on the school finance bills, SB 3 and HB 3, will continue next Tuesday.
As of the writing of this story, HB 3 has not yet been heard in committee or received public testimony.
This story has been updated 10 AM, April 26.
Follow Reform Austin for the latest updates on the state’s school finance plan.