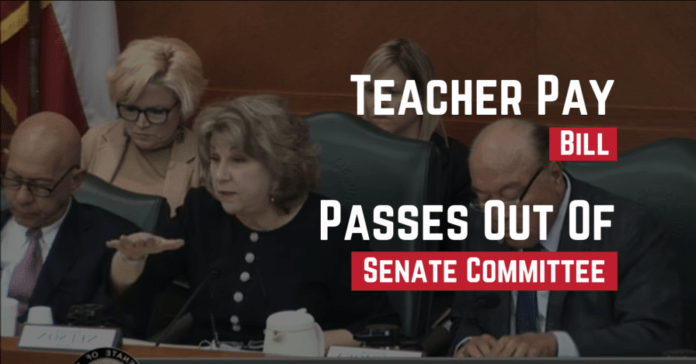 (From left to right: John Whitmire, Jane Nelson, Juan “Chuy” Hinojosa)
Monday morning, the Senate Finance Committee unanimously passed an amended committee substitute of Senate Bill 3, Senator Jane Nelson’s (R-Flower Mound) plan for teacher pay, after hearing invited and public testimony. Nelson also chairs the committee.
All committee members are signed on as co-authors.
Lt. Governor Dan Patrick touted the bill during his inauguration speech last month, the same date the bill was filed, saying, “We have to put our teachers first.”
Patrick addressed critics who support merit pay over an across-the-board raise in an op-ed, saying, “this is not an either-or situation” and supports both. Nelson said language in the bill ensures local school districts are not precluded from offering merit pay.
The bill is expected to give all full-time classroom teachers in Texas public schools an across-the-board $5,000 permanent raise for the 2019-2020 school year.
Former House Public Education Chair Jimmie Don Aycock testified to his former committee two weeks ago, “for many years, the state has been trying to get out of the business of dictating teacher pay”, he said. Education Commissioner Mike Morath echoed this statement in his committee testimony today, saying a handful of districts use the state’s minimum salary for teachers. School districts pay well above it. The current average starting teacher pay is $47,500 a year and will increase to $52,500 with the implementation of this bill.
The fiscal note on the introduced bill estimates the cost of this appropriation at $3.65 billion over the next two years, taking up the majority of additional state funding in the Senate base budget, which offers $4.3 billion. The committee substitute raised the cost by including language that commits the state to cover teacher pension increases as a result of the pay raise. Nelson said this addresses the concern about school districts bearing the burden of an estimated $257.6 million in retirement and health benefits provided by TRS (Teacher Retirement System).
Nelson added a clarifying amendment to ensure teachers at open-enrollment charter schools will benefit from the pay raise.
The actuarial analysis of the introduced bill suggests the impact will increase the number of years it takes the TRS to pay off its unfunded liabilities. This means a benefit increase will not occur for another 63 years. An alternative is to increase state funding for TRS so local school districts and retired teachers do not have to bear the brunt of the cost. The committee substitute nullifies the effect of the teacher pay raise on TRS.
Critics of the bill have cast doubt on the sustainability of the state investment in teacher pay, wondering whether the state will continue funding it after the upcoming biennium. Their concern appeared to be alleviated by an amendment from Senator Kirk Watson (D-Austin).
One flashpoint during the hearing occurred when committee members expressed open hostility towards witnesses who testified on the bill, rather than taking a clear stance for or against it. This first came up during the testimony of Texas School Coalition (TSC), who represent administrators and boards of recapture school districts. The group supported increasing teacher compensation, but wanted local school districts to have more flexibility rather than an across-the-board pay raise. Senator John Whitmire (D-Houston) said he was “disappointed” they did not testify for the bill. He suggested it was better to support the bill and then raise concerns instead of not taking a position on the bill.
Another witness, Chandra Villanueva of the Center for Public Policy Priorities, raised the issue of inflation reducing the benefits of a $5,000 pay increase. She advocated to instead raise the basic allotment and adjust for inflation. Senator Paul Bettencourt (R-Houston) was “astonished” the group had not testified for the bill.
Much of the public testimony came from teachers, who described working second and third jobs to make ends meet and the additional burden low pay has on their families. One teacher described having to moonlight as an Uber driver, others described their out-of-pocket expenses reaching over $1,000 a year in order to provide school supplies to low-income students.
The majority of the testimony was in support of the bill, with some suggesting including librarians, school counselors, paraprofessionals and other support staff in the salary increase.
Nelson ended the committee hearing, “We so appreciate our teachers but… if we don’t show our appreciation… in the amount of money we give them in the classroom, we’re going to lose more good teachers.”