“I’m proud of where we are in the bill that we are sending to the Senate,” Zerwas said at the end of the marathon debate. “Each and every one of you should be incredibly proud of the work that you’ve put in here.”
The two-year spending plan’s highlight — a $9 billion boost in state funding for the public education portion of the budget — remained unchanged. Of that, $6 billion would go to school districts, and the remaining $3 billion would pay for property tax relief, contingent on lawmakers passing a school finance reform package.
The budget plan would spend $2 billion from the state’s savings account, commonly known as the rainy day fund, which holds more than $11 billion.
“I’m not here to compare it to previous sessions,” Bonnen told reporters after the House budget vote. “But I’m here to tell you we had a great tone and tenor tonight, and I’m very proud of the business that we did.”
Some of the more contentious budget proposals floated by lawmakers never reached the floor. An amendment from state Rep. Richard Peña Raymond, D-Laredo, for example, would have asked members to vote on the issue of across-the-board pay raises for public school teachers. Such a proposal has divided the Legislature this session, with Lt. Gov. Dan Patrick’s Senate in favor and much of the House opposed. Raymond withdrew his amendment Wednesday evening, saying he planned to bring up the issue again when the House debates its school finance bill. 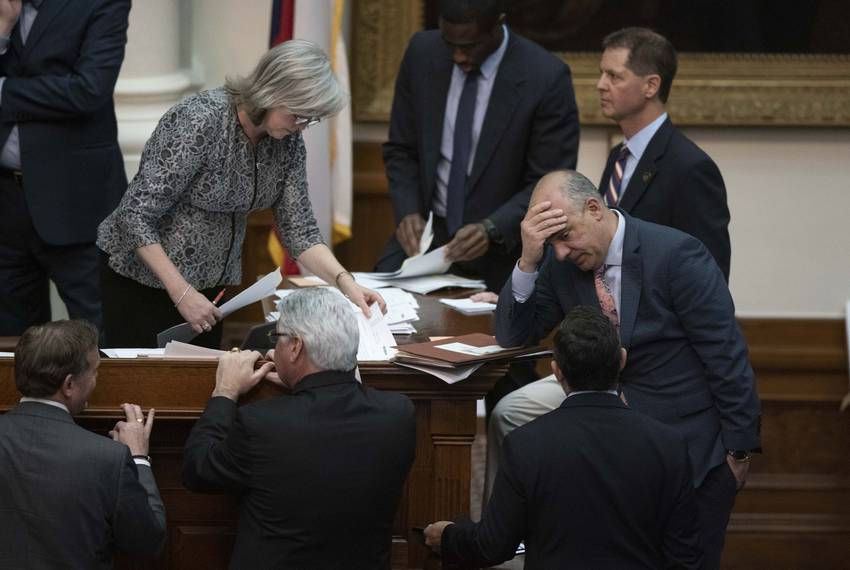 Debate on HB1, the House state budget bill, continues into its 12th hour as State Rep. Chris Turner, D-Dallas, shows the strain of a long night. March 27, 2019.  Bob Daemmrich for the Texas Trib
A proposal from state Rep. Mayes Middleton, R-Wallisville, to prohibit disaster recovery dollars from benefiting noncitizens and “illegal aliens” was quietly withdrawn after sparking controversy earlier this week. Across the aisle, state Rep. Jessica González, D-Dallas, withdrew her amendment that would have required Gov. Greg Abbott’s office to prepare a report on domestic terrorist threats posed by white supremacists.
Bonnen worked behind the scenes in the days preceding the vote, House lawmakers said, in the hopes of avoiding the discord that has erupted during the chamber’s marathon budget debates in past sessions. On Tuesday, top lieutenants for Bonnen met for a handful of informal gatherings to offer concessions in exchange for lawmakers dropping some of their more controversial amendments, according to people familiar with the meetings.
The result was one of the shortest budget debates in recent memory. Lawmakers gave preliminary approval to the two-year spending plan minutes after the clock struck midnight. Under former House Speaker Joe Straus, lawmakers in 2017 and 2015 went home well into the morning, after several explosive exchanges between Straus’ allies and the chamber’s hardline GOP membership.
“This budget night is unlike any other I have experienced in my time in the House — both in it’s shorter duration and civil tone,” said state Rep. Matt Krause, a Fort Worth Republican and Freedom Caucus member, in a text message after the debate concluded. “I think Speaker Bonnen deserves the bulk of the credit for creating an environment of civility and decorum. This is how the Texas House should operate when debating the big issues for the state of Texas.” 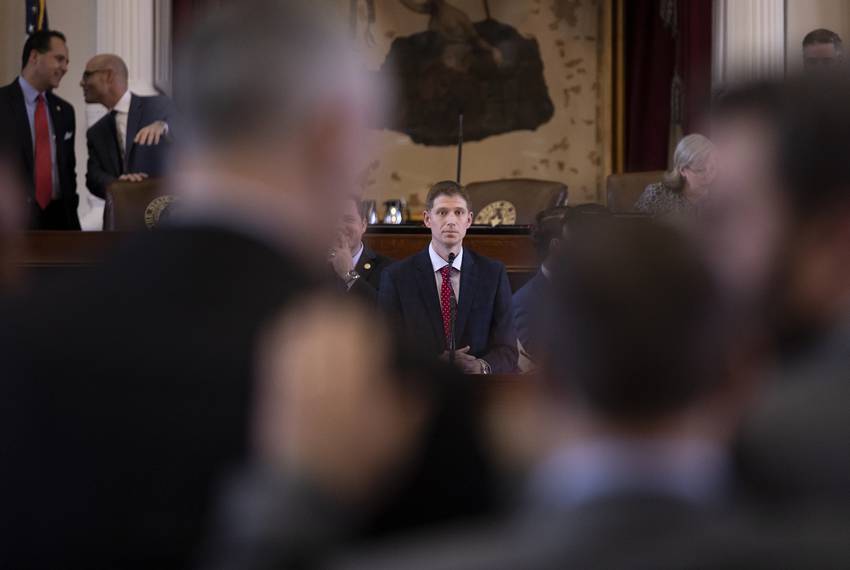 Rep. Matt Krause, R-Fort Worth, addresses the house floor during budget night at the State Capitol on March 27, 2019  Miguel Gutierrez Jr./The Texas Tribune
So while Bonnen’s first budget night as speaker was hardly free of controversy — an argument over the effectiveness of the state’s “Alternatives to Abortion” program, for example, derailed movement on amendments for nearly an hour — the occasional spats paled in comparison with those of years past. There were no discussions at the back microphone of lawmakers’ sexual histories, as happened in 2015, and no one had to physically restrain House members to prevent a fistfight over the fate of a feral hog abatement program, as happened in 2017.
Still, state Rep. Jonathan Stickland, R-Bedford, continued his long-running campaign against the feral hog program. And though the exchange ranked among the evening’s rowdiest, it was more than tame by last session’s standards.
State Rep. Drew Springer, R-Muenster, again opposed Stickland’s amendment to defund the program, which reimburses local initiatives to eradicate wild hogs. Stickland responded, “Members, although I respect the thoughtful words of Rep. Springer … let’s end this program right here, right now.”
Stickland’s amendment failed, with just four votes in favor.
In an earlier dustup just before 2 p.m., state Rep. Sarah Davis, R-West University Place, who led the House budget negotiations over health and human services programs, was seen in a heated exchange with state Rep. Jeff Leach, R-Plano.

A few minutes later, Leach proposed an amendment that would allow Texas to expand Medicaid coverage for women up to a year after they give birth. To cover some of the costs, Leach’s amendment recommended cutting $15 million from a program in Abbott’s office that reimburses film and video game makers who work in Texas.
Extending postpartum Medicaid coverage “is simply more important and should be a higher priority” than the film incentives program, Leach said.
Democrats gathered at the back microphone to oppose the motion, saying the funding should come from elsewhere.
“I appreciate that you’re trying to help women’s health,” said state Rep. Donna Howard, D-Austin, who said she supported the film incentives as a job-creation program. “If we found another source, would you create another amendment?”
“I’m not going to agree to hypotheticals,” Leach replied. The amendment subsequently passed without a recorded vote after putting Democrats in the awkward position of voicing opposition to a Medicaid coverage expansion they otherwise supported.
A more ambitious Medicaid coverage expansion, which would have provided publicly funded health insurance to low-income Texans under the Affordable Care Act, failed for a fourth legislative session. The Medicaid expansion amendment brought by state Rep. John Bucy III, D-Austin, was rejected with 66 votes in favor and 80 opposed.
Still, Democrats saw some wins Wednesday. For example, an amendment by state Rep. Michelle Beckley, D-Carrollton, that would require the Department of State Health Services to conduct a study on vaccination rates among children at licensed child care facilities was approved in a 79-67 vote. Another successful amendment by state Rep. Chris Turner, D-Grand Prairie, directs the state to come up with a transition plan for when a pot of federal health care safety-net funding, known as the 1115 waiver, dries up in 2021 and 2022.
Complicating budget negotiations was news of an updated property tax reform proposal, which was expected to be laid out in committee before the House convened but was instead postponed until after the budget debate. Debate over that updated proposal, which drew opposition from Democrats and hardline Republicans, carried over onto the floor as its author, state Rep. Dustin Burrows, R-Lubbock, met with committee members to discuss the high-priority legislation.
The debate on the HB 1 ended with a procedural move spearheaded by Turner and Burrows to wrap up the remaining amendments and send them to the wish list portion of the wish list portion of the budget. That section of the budget, known as Article XI, is considered a graveyard for most line items.
Passing an amendment to the wish list is “just a way to get you off the main,” state Rep. Yvonne Davis, D-Dallas, said in protest earlier in the evening, shortly before one of her proposals was shot down. 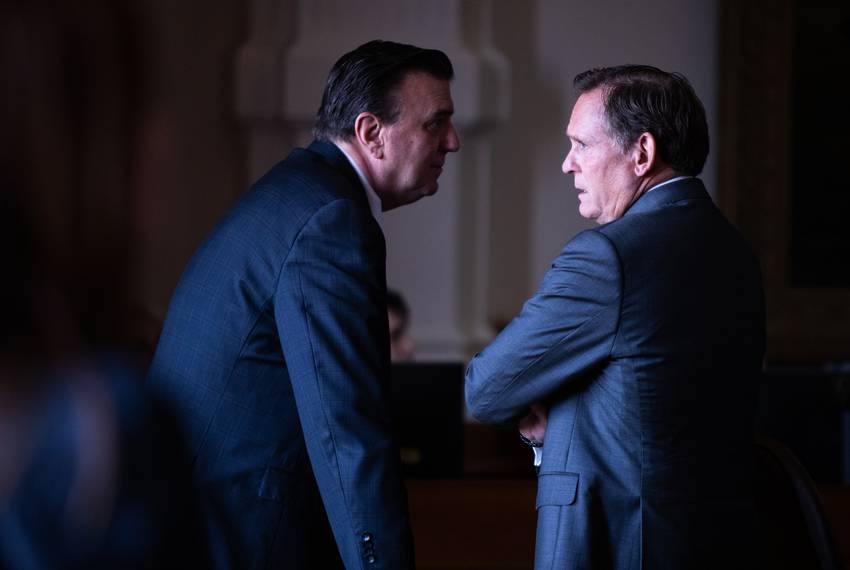 State Rep. John Zerwas, R-Richmond (right), speaks with Rep. Dennis Paul, R-Houston (left), in the House Chamber on March 27, 2019, the day the House will take up HB1, the 2020-21 budget plan.  Emree Weaver / The Texas Tribune
The two-year budget wasn’t the only spending plan advanced by the House on Wednesday.
Lawmakers also approved a $9 billion supplemental spending plan to pay for leftover expenses that aren’t covered in the state’s current two-year budget, mostly for Hurricane Harvey recovery and health and human services programs.
A $4.3 billion withdrawal from the state savings account covers the largest share of expenses in the supplemental bill. Another $2.7 billion comes from the state’s general revenue, and $2.3 billion are federal funds.
The legislation, Senate Bill 500, returns to the Senate, whose stopgap spending plan approved earlier this month carried a $6 billion price tag.
Lawmakers in 2017 underfunded Medicaid, the federal-state health insurance program for the poor and disabled, requiring a $4.4 billion infusion of state and federal funds. The Legislature must pass the stopgap funding bill before the end of May if the Texas Health and Human Services Commission is to be able to pay health care providers on time.
The supplemental bill also includes: