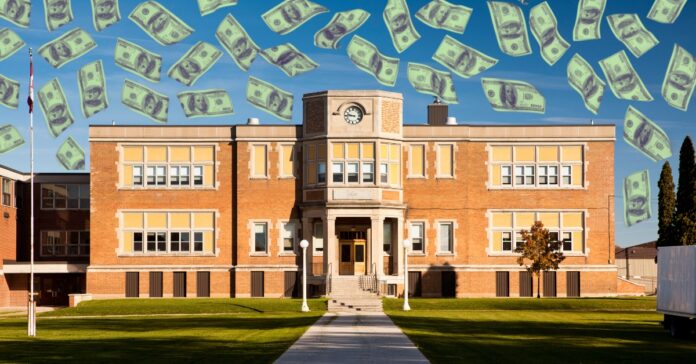 Texas ended up with a $30 billion budget surplus this year. How that extra money will be spent will be a big topic when the Texas Legislature meets in a couple of weeks. Top Republicans have already planned big tax rebates, but do have some education spending in mind.

“When you have this kind of money, you have to give it back to the taxpayers,” said Lt. Governor Dan Patrick in an address on the surplus.

His top priority is a rebate for homestead exemptions and property taxes, something that would not affect most of the poorest Texans. More spending on border security was also high on his list. However, he did mention some badly needed education spending.

The state continues to rank in the bottom quartile of spending per student across the country. According to Just Fund It TX, a public school funding advocacy group, Texas spends $4,000 less per year per student than the national average.

Both Patrick and Governor Greg Abbott have supported raising teacher pay as well as retirement benefits. Wage increases are desperately needed as more teachers are quitting the system. A survey done by the Charles Butt Foundation found that 77 percent of Texas teachers have considered leaving the profession in 2022, mostly driven by poor wages, the ongoing pandemic, and Texas Republicans using schools as a front in their culture war. More money would help retention rates.

Earlier this year, Abbott did move some money around to pay for additional school security. This included $17 million for bulletproof shields for officers. Safety is on everyone’s minds following the horrific Robb Elementary School massacre.

On the higher education front, both Patrick and Abbott have supported increasing endowments for public universities. Both the University of Houston and Texas Tech have already requested $1 billion. These new endowments would help funnel money to schools that are not covered by the Permanent University Fund. For years, being excluded from the PUF has kept schools from performing on the same level as those who do.

The top two Republicans may have to move their tax cut down the priority list if Texas House Speaker Dade Phelan gets his way. The Speaker is leery of spending the extra money on taxpayers who by and large are not responsible for it.

“Let me just remind you, none of this money came from property taxes. It all came from sales tax,” says Phelan. “Whatever we do on property tax relief, I just want to say we have to do it every single session in perpetuity of raising your taxes. Because how it works is we bogged down your local school tax. We pay more. You pay less in your school tax. States make up the difference. Well, guess what? Next session, I guarantee you, in 2025, there will not be $30 billion in surplus. There may be none. That’s how it works.”

Sales tax has historically taxed the poor at far higher rates than the rich, who are also much more likely to own homes. Phelan’s assertion that billions should not be spent first on tax rebates for higher earners gives some hope that education, which benefits all Texans, may get first crack at the surplus.