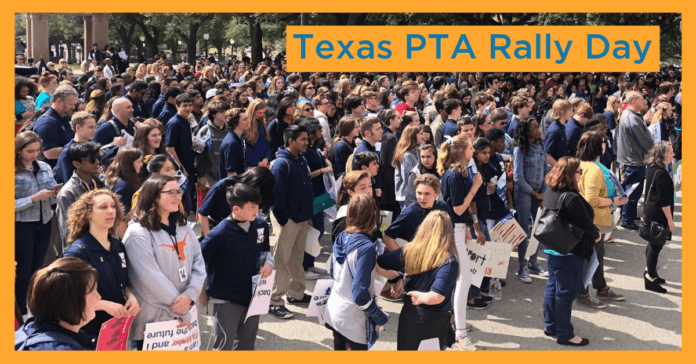 An estimated five million students are enrolled in Texas public schools, with numbers expected to climb each year. But as school populations steadily grow, state funding for education continues to dwindle, leaving it up to Texas homeowners to pick up the tab.
Early Monday morning, school buses filled with thousands of students, parents and members of PTAs from across Texas arrived at the Capitol to organize Rally Day, an event to create awareness, voice concerns, and ensure politicians prioritize issues involving public education during the 86th legislative session. In total, over 2,000 advocates, Texas students, superintendents, and the Student Caucus arrived ready to push politicians to “back the future.”
Some of the top issues included mental health programs, increases to special education funding, school safety improvement, and finding viable funding for public schools.
Speakers included major education leaders like Commissioner of Education Mike Morath , House Committee on Public Education Chair Rep. Dan Huberty (R-Houston), and Speaker of the House Dennis Bonnen (R-Angleton).
“You have a Governor, Gov. Abbott, you have the Lieutenant Governor, Lt. Gov. Patrick, you have the members of the Senate and that’s why [school finance reform is] going to happen. We are all together. Are we together on the exact details? No. […] But we do all agree that we must accomplish significant reform in school finance and we must do that now,” said Speaker Bonnen.
Education has become a hot button issue during the session. Constant pressure from many groups has helped to elevate education to the forefront of politicians’ minds as they file and vote on various bills.
Finding a solution to public school finance reform is no easy task, but the collective effort to spark conversation, and shed light on one of Texas’ most glaring issues suggest change is on the horizon.
Less than two weeks remain in the legislation filing period and additional education and property tax relief bills are likely to be filed. Reform Austin will continue to track and update you on this issue.
More information on what took place at the event can be found on Texas PTA’s Facebook and Twitter.