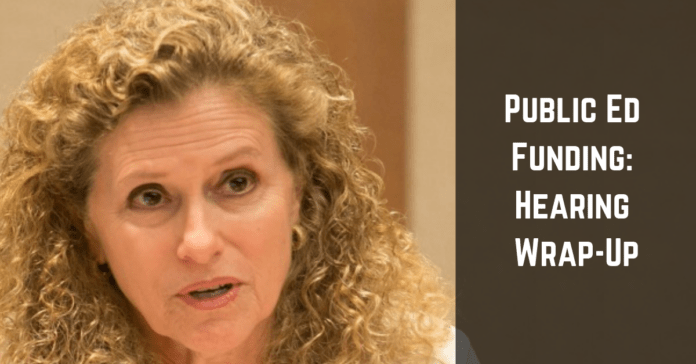 Pictured: Donna Howard (Austin American-Statesman photo, Jay Janner)
AUSTIN, TX – The House Appropriations Subcommittee (S/C) on Article III held a meeting Wednesday, February 20th to listen to testimony on House Budget recommendations for the Texas Education Agency (TEA).
Subcommittee Function & Membership
The S/C divides the work of the House Appropriations Committee, which oversees the budget. This allows the S/C to handle different articles of the budget. The S/C on Article III, in particular, addresses the Education section of the budget.
Chairing the subcommittee this session is Rep. Greg Bonnen (R – Friendswood). Rep. Armando Walle (D – Houston) serves as vice-chair. Returning committee members include Rep. Donna Howard (D – Austin), Rep. Mary Gonzalez (D – Clint), and Rep. Gary VanDeaver (R – New Boston).
Several new faces are on the subcommittee, including returning House members Rep. Matt Schaefer (R-Tyler) and Rep. Lynn Stucky (R-Denton), as well as freshman legislator Rep. Carl O. Sherman, Sr. (D-DeSoto).
Toplines
Testifying before the committee were members of the Legislative Budget Board (LBB) and TEA Commissioner Mike Morath.
Most of the appropriations for TEA is considered “pass through”, or a vehicle to pass funding to the 1,200 Independent School Districts (ISDs) across Texas.
As previously reported, the House base budget includes an infusion of $9 billion in funding for public education compared to last session, with one caveat: the new funding is contingent on legislation enacted to increase state share of public education funding and enhance district entitlement, reduce “Robin Hood” (aka recapture), and provide local property tax relief while maintaining an equitable school funding system.
LBB’s Testimony on Current & Upcoming Biennium Education Costs
Members of the LBB testified on both the House Budget recommendations for the Foundation School Program (FSP) – the primary source of state funding to public schools – and non-FSP programs and administration of TEA.
Tedd Holladay of LBB testified total TEA funding increase in House Bill 1 is $7.3 billion in General Revenue (GR) for the upcoming biennium, an increase of 19.8 percent.
Aaron Henricksen of the LBB testified on the FSP recommendations in the House budget. He first laid out the current biennium FSP appropriations to give a reference point for the House Budget’s recommendations. None of LBB’s impact analysis of the recommendations, he noted, included the contingent $9 billion.
Under current law, LBB projects a net state savings of $1.6 billion in GR-related funds in 2020-2021 over the ’18-’19 base budget. This is in large part due to property value growth, with a projected $5 billion increase in recapture over the next two years.
Rep. Howard said, “the state is again seeing a windfall, if you will, off the hook, for over $5 billion based on increased property values at the same time we’re saying we have an additional $7.4 billion [in the budget].”
The state share of education funding in 2019 is 37.8 percent, reported Henricksen. Under current law, the state share will go down to 34.6 percent in 2021. If the contingent $9 billion is applied, however, this would increase to 39.8 percent.
The LBB reported the basic allotment in 2018-2019 is $5,140. This would also be raised should the $9 billion be applied.
Adjustments in the current biennium had savings of $450 million compared to what was appropriated because student enrollment in school districts was lower than projected. For student growth in the upcoming biennium, the LBB estimates a 1.28 percent increase in Average Daily Attendance (ADA) per year. The projected cost for the adjusted enrollment growth is $2.4 billion.
Henricksen also testified the HB1 has a $6.2 million increase in funding for facilities.
TEA and their Legislative Appropriation Request
Commissioner Morath testified “all-in spending reflective of actual data inclusive of all sources of revenue and expenditures” is about $60 billion spent through TEA. The agency has an administrative budget of $47 million, which has a mix of revenue sources. He added there was a big jump in FTEs from 2018 to 2020 due to the Corrective Action Plan regarding special education federal compliance. Morath also testified HB1 addresses all exceptional items in TEA legislative appropriations request. This included special ed compensatory supports and Safe and Healthy Schools, which he previously explained to the House Public Education Committee. Both are fully funded in the introduced bill, which LBB reports at a total biennium cost of $10.1 million.
Learn more
The testimony of the Legislative Budget Board and TEA also covered several school finance topics, which Reform Austin has more in-depth coverage, as follows: