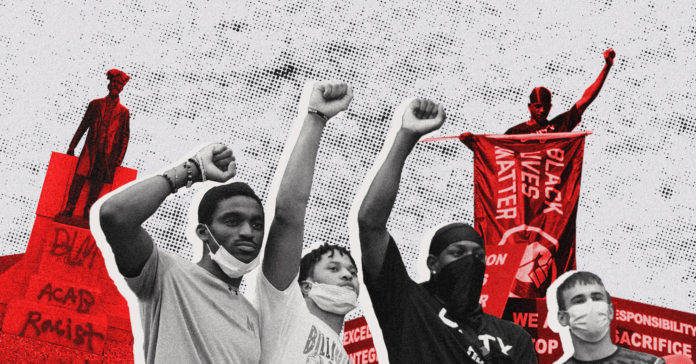 All colleges have their own traditions, but few adhere to them quite as strongly as Texas A&M. Amid the recent social justice movement regarding Black lives and rights, there are renewed calls to remove the statue of Confederate General and former university president Lawrence Sullivan “Sul” Ross as well as more attention and sensitivity to the growing diversity of the student population.

The fire that was ignited by the death of George Floyd reached the campus in midsummer. A protest and a counter-protest took place in a terse standoff. On one side were the traditionalists, mostly white current students and alumni who chanted things like “Aggie traditions matter.” On the other side was a more diverse crowd of protestors who see the statue of the Confederate soldier as a continued reminder of how America has denied Black and native/indigenous people equality. The situation was especially tense as Floyd graduated from the Kingsville campus of the university. In June, a viral video filmed on the campus contained anti-Black slurs and calls for Black people to be euthanized.

Ross is a complicated figure in Texas history. As both a Confederate military leader and Texas Ranger, he participated in violent conflicts meant to suppress Black and native/indigenous people. As governor, he intervened in the Jaybird–Woodpecker War and essentially broke the power of Black Democratic politicians so they could be replaced with white supremacist Democrats. On the other hand, he also founded a state asylum specifically for deaf and blind Black children, an act that many of his defenders seize upon to prove he wasn’t racist.

The fight has percolated all the way up to the Texas Legislature. Attorney General Ken Paxton has stated that any removal of the statue must be done under order of the Legislature. This opinion was requested as guidance by Rep. John Cyrier (R-Lockhart) and does not actually have legal force.

“Texas A&M University may move the Ross statue if needed to accommodate construction, repair, or improvements to the surrounding property, but if permanently removing the statue, the university must relocate it to a prominent location,” Paxton wrote.

Most students aren’t even asking that the statue be taken off campus. Instead, the most common solution proposed is that it be moved to the Cushing Library, where it can instead be viewed in terms of history rather than an object of honor. The location would still allow students to participate in the Aggie tradition of placing pennies at its feet in order to be blessed with academic good luck. However, school leadership has declared that this spot does not meet the “prominent” test of the attorney general’s opinion.

One hope is that the spot might become the home of a statue of Matthew Gaines, a former slave who was elected to the Texas State Senate and was part of the movement that established the first Texas public schools. Gaines was eventually driven out of the Senate by a combination of racism and false accusations that he was a bigamist.

A statue of Gaines has been proposed as far back as 1998 but fundraising only met the intended goal this year thanks to several generous donations. The statue is due to be finished and installed next May.

“Our mission is that, no matter what race, gender, religion, background, you can make a difference on A&M’s campus,” said Erica Pauls, president of the Matthew Gaines Initiative, to KAGS.

The controversy over the Ross statue is part of a larger conversation being had in America over the legacy of the Confederacy. Following a white supremacist rally in Charlottesville, Va., in 2017, a slew of monuments came down as well as increasing bans on use of the Confederate flag on public land (and at NASCAR events). Opponents repeatedly cried that tradition, heritage and history were being erased. This ignored the fact that many such monuments existed in places that either were not part of the Confederacy or hadn’t even been states when the Civil War was fought.

The vast majority of such memorials, including the Ross statue, were erected long after the Civil War and generally during periods of Black civil rights advances as a form of official retaliation. Ryan Best at FiveThirtyEight found that the greatest number of statues were built between 1900 and 1920 (the Ross statue was finished in 1917, nearly 20 years after his death), right as many states were aggressively pushing to disenfranchise Blacks and the Ku Klux Klan was on the rise. The heyday of Confederate monuments continued through World War Two.

A great many of these were put specifically in public institutions such as schools and courthouses. Many authorities, including Jane Dailey, professor of American history at the University of Chicago and Lecia Brooks of the Southern Poverty Law Center, see the memorial movement as expressly racist attempts to remind Black people how precarious their social positions remained.

“I know what this statue means,” Brooks told FiveThirtyEight. “It’s a reminder to stay in my place.”