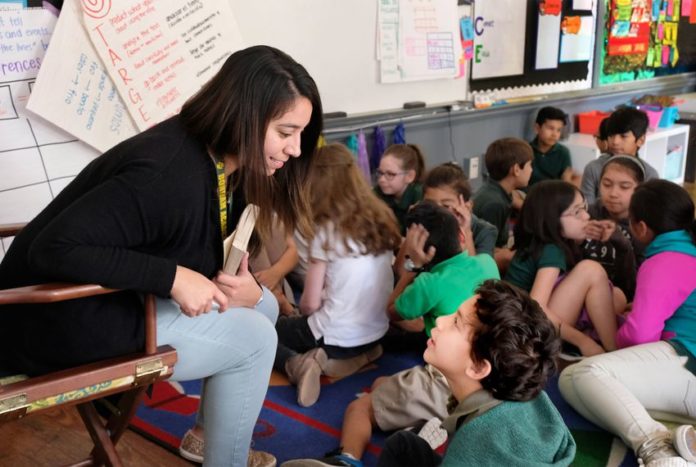 When state lawmakers passed their landmark $11.6 billion school finance law in late May, school employees were eager to see how mandatory raises would affect their paychecks.

A month later, they’re scratching their heads, struggling to decipher complicated changes and conflicting financial estimates that might not net teachers as much money as they expected.

Before lawmakers voted nearly unanimously to approve House Bill 3, which drastically overhauled Texas’ outdated school funding system, they received estimates from the state on how much additional money each of their school districts would likely receive over the next two years. But the estimates came with a warning: They could change significantly once the calculations were performed using local data.

Ahead of the upcoming school year, districts are now redoing those calculations themselves — and some are coming up short. That could pose a problem for teachers, nurses, counselors and librarians, since under HB 3, school districts are supposed to use a portion of the new money on those employees’ raises and benefits. (School boards must approve their budgets by either a June 30 or an Aug. 31 deadline.)

Georgetown ISD, for example, is projecting $5.9 million in new money in the upcoming school year, much less than the $10.3 million state estimate. And it will shell out about $9 million in recapture payments, which the state takes from wealthier districts to subsidize poorer ones — not the $3.5 million the state estimated in May.

Cypress-Fairbanks ISD, a large suburban district in the Houston area, should’ve expected $30 million more in the upcoming school year, according to the state estimates. But school board members approved a budget in late June that projected just $14 million more, according to Karen Smith, the district’s chief financial officer.

To remain competitive as employers, both districts are going beyond the state’s requirement to use 30% of the new money to increase salaries and benefits. Georgetown ISD is including $3,000 raises for teachers, counselors, librarians and nurses with more than five years of experience. Cypress-Fairbanks ISD approved a budget millions of dollars in the red that includes $25.4 million in raises for classroom teachers, librarians, counselors and nurses and $10.8 million in raises for all other employees.

Teacher pay raises quickly became a bipartisan rallying cry during the 2019 legislative session that finished up in May. But instead of the statewide $5,000 raisemany teachers advocated for from the get-go, lawmakers approved a set of guidelines for salary bumps that would end up leaving the dollar amounts largely up to district leaders.

There is not yet an official statewide summary on what compensation packages look like across school districts, but eventually districts will be required to report that information to the Legislature. Meanwhile,the state has been providing guidance on how to interpret the new law through videos and PowerPoint presentations.

Without an across-the-board pay raise mandate from the state, teachers and other school employees have been looking left and right at neighboring school districts to judge how they’re going to fare. Some report having heard nothing from their school districts so far this summer, as they anxiously monitor the news from across the state.

Sunnyvale ISD Superintendent Doug Williams found that the state’s calculation for how much more his tiny school district would receive was pretty accurate: just under $600,000. But school districts in the vicinity, which include large, urban Dallas ISD, are getting millions more, meaning they’ll be required to offer bigger raises.

To stay competitive, Sunnyvale ISD’s school board approved larger pay raises than required by law, ranging from $1,800 for beginning teachers to $2,700 for the most experienced. “We have been blessed to be able to attract and retain great teachers,” Williams said. “We just want to make sure we are able to continue.”

In some school districts, local teachers’ unions and associations are butting heads with administrators as they advocate for higher raises and larger employer contributions to health insurance. After adopting a budget with 5% raises, Laredo ISD’s officials told frustrated teachers they are waiting for more guidance from the state before they consider raising salaries further.

In Houston ISD, the teachers union successfully threatened a no-confidence voteagainst the superintendent if trustees didn’t pass a budget with pay raises by later this month, arguing the delay would make them less competitive for hiring. After a contentious meeting, the board ultimately approved a deficit budget containing raises of 3.5% to 8%, depending on school employees’ experience levels. The budget also increased the minimum wage for school employees by $2 an hour.

For third grade writing teacher Huyenchau Vu, who watched the Legislature’s initial proposal for $5,000raises dissolve, a 3.5% raise means a boost of less than $2,000 a year and less than $100 per paycheck. “It goes back into paying for everything, not necessarily into a savings account,” said Vu, who just finished teaching summer school at Houston ISD and will start her third year teaching in August.

She and her colleagues have been taking notes about the higher starting salaries and raises for Houston-area districts such as Aldine ISD and Alief ISD, but not necessarily because they’re trying to jump ship. While Vu would appreciate more money, she is also worried about the sustainability of the Legislature’s funding increase and is glad Houston ISD appears to be more “realistic” in its budgeting decisions than its neighbors.

“They’re paying their teachers a lot more knowing it’s just over the next two years that we’re receiving money from the state of Texas to put into these teacher salaries,” she said. “After that, no one’s sure what’s going to happen.”