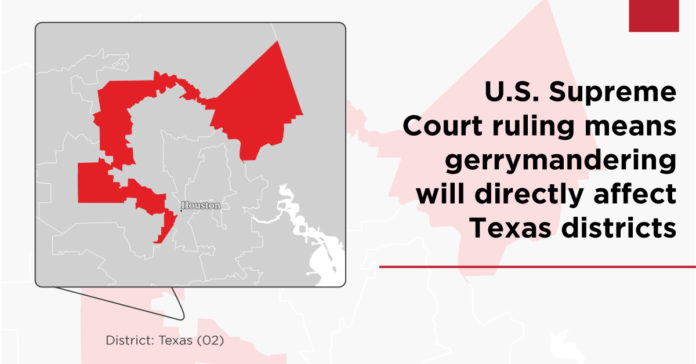 In a decision reached on June 27, the U.S. Supreme Court ruled that federal courts will have no role in disputes over congressional districts drawn for partisan gain, otherwise known as gerrymandering.

Chief Justice John Roberts wrote in his majority opinion, “the districting plans at issue here are highly partisan, by any measure.” But ultimately, in a 5 to 4 decision, the Court elected to leave discrepancies regarding redistricting or gerrymandering up to Congress or state legislatures.

In the dissent for the liberal wing of the court, Justice Elena Kagan wrote, “For the first time ever, this Court refuses to remedy a constitutional violation because it thinks the task beyond judicial capabilities.”

Redistricting, a process controlled in Texas by the majority party, occurs once every 10 years. Following the 2020 census, Texas lawmakers will begin redrawing political districts. Gerrymandering occurs when districts are intentionally drawn to benefit a political party, either to win more seats, or to protect existing seats.

Texas has a longstanding history of gerrymandering, and because of the power at stake, both parties have been guilty of using the political ploy. This results in a lack of moderate representatives willing to compromise with the opposite party, and more firmly partisan elected officials.

Some argue gerrymandering is a prevalent issue in places like Texas because lawmakers are involved in the drawing of their own districts. To create truly representative districts, over a dozen states have shifted the responsibility of mapping to independent or bipartisan commissions.

Just one day after the Supreme Court ruling, Lt. Gov. Dan Patrick announced his appointments to the 2021 Redistricting Committee for interim hearings, composed of 10 Republicans and seven Democrats. If the 87th Legislature does not approve the redrawn maps in 2021, the Texas Constitution allows the responsibility of redistricting to be advanced to the Legislative Redistricting Board (LRB). The five members that make up the LRB are the lieutenant governor, speaker of the house, attorney general, comptroller, and commissioner of the general land office—all Republicans.

This puts extreme pressure on the upcoming 2020 elections. For decades, the Republican Party has controlled the Texas legislature. But in the 2018 elections, Democrats flipped 12 seats in the Texas House, and now need only nine seats to control the legislative body.

Several bills were filed in the 86th Legislature to reform the redistricting process in Texas, but none made it out of committee. That means the burden now falls on Texas voters. If Texans want improvements to district-mapping, they’ll need to vote for candidates that support the same reform, as the decisions made in 2021 Texas redistricting will impact the next decade.