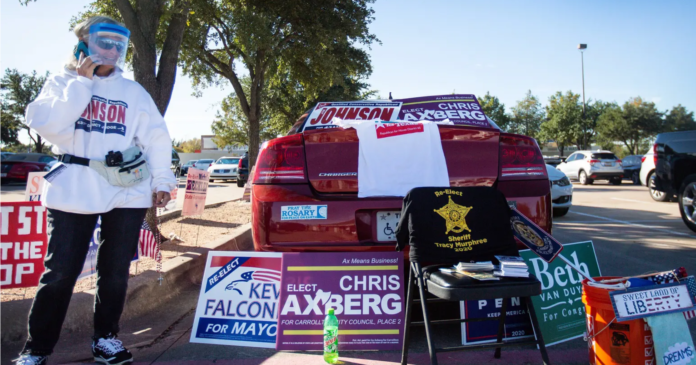 Wearing T-shirts, buttons or hats supporting political candidates at the polls is illegal. But in the pandemic era, voters are now being reminded that the electioneering rules also apply to face masks.

According to the law, “a person may not electioneer for or against any candidate, measure, or political party” within 100 feet of a polling place.

“It’s really a protected area that should be just focused on providing the access to the ballot and voting processes without any kind of interruption or any kind of chaos, or stress, or concerns,” said Bruce Sherbet, elections administrator for Collin County.

For years, election officials have had to ask voters to turn their political shirts inside out and leave their accessories in the car. This election cycle, poll workers are also dealing with political messages on some face masks intended to protect voters from the coronavirus.

Sherbet said Collin County judges this year are offering plain disposable masks to cover the political ones, he said.

“We strongly encourage masks, so if someone is wearing them, we don’t want to be too inconvenient with it as long as they can just cover it up,” Sherbet said.

What can I wear to the polls?

Electioneering specifically includes advocating “for or against any political candidate, measure or political party.”

Sherbet said this means while a “Make America Great Again” hat or Joe Biden button would count as electioneering, a Black Lives Matter or “Don’t tread on me” message would not because they are advocating for a movement.

But electioneering could be interpreted and enforced differently across the state.

In 2016, a San Antonio man wore a T-shirt and hat supporting Donald Trump. He removed the hat, but not the “Basket of Deplorables” shirt. He was arrested on electioneering charges.

In 2012, a woman in Williamson County was asked to cover up her shirt that read “Vote the Bible.”

“Ultimately, it falls upon local Election Officials to make the final determination as to what constitutes electioneering,” said Stephen Chang, spokesperson for the secretary of state’s office in an email.

According to the secretary of state’s office, voting clerks and election judges decide what counts as electioneering and have the authority to ensure there is no electioneering in that area.

So why are there so many signs and political volunteers outside my polling site?

Within 100 feet of the polls, electioneering is not allowed. But outside of that boundary, campaigns are free to wave signs, hand out fliers, advocate for proposals and wear whatever campaign gear they want.

But campaign volunteers and advocates cannot use sound amplification devices or loudspeakers, which must be 1,000 feet away from the polls.

What’s the difference between electioneering and voter intimidation?

Voter intimidation is illegal nationally, regardless of where it takes place at a polling location, said David Becker, executive director at the Center for Election Innovation & Research, in an email.

“So, if any conduct goes from being merely expressive to intimidating toward voters, it would be outlawed regardless of where it occurred,” Becker said.

The difference is that voter intimidation is when someone does “anything that could negatively affect a voter” when they go to vote. This includes making people feel in physical danger or uncomfortable, verbally accosting them and any other activity that someone “shouldn’t have to endure while exercising their most fundamental right,” he said.

The ACLU website says voter intimidation can include aggressively questioning voters about citizenship or criminal record and falsely representing oneself as an elections official. It also includes spreading false information about voter requirements and voter fraud.

What should I do if I see electioneering?

Sherbet said it’s best to tell an election judge at the voting location if you see what could be illegal electioneering. He said they are trained to handle electioneering and if someone notifies the election office, the office will relay the message to the judge at that location.

According to the secretary of state’s office, local voting clerks and election judges decide what counts as electioneering. While serving in that capacity, they have the authority of a district judge to ensure there is no electioneering. If judges or clerks have questions, they can ask their local election office or the secretary of state’s office.

This story was originally published on the Texas Tribune. To read this article in its original format, click here.