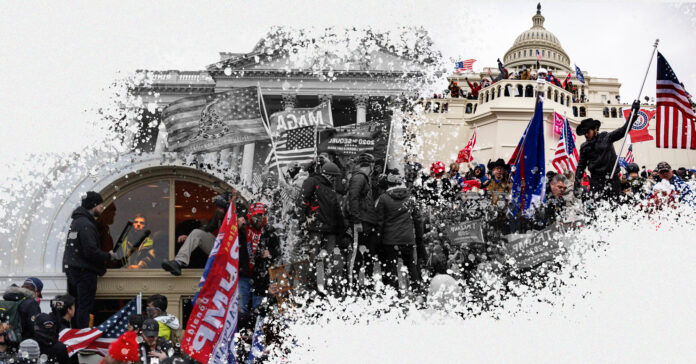 The Big Lie is the colloquial term for saying that the 2020 presidential election was rife with fraud and stolen from Donald Trump. Propagandizing from prominent Republicans resulted in an endless series of pointless audits and the violent attack on the U.S. Capitol that left several people dead. One year after that attack on January 6, Texas Republicans are still running with the Big Lie.

The idea of the fraudulent election has definitely taken root in the conservative base. A flurry of recent polls show that Republicans by an large felt the attack on January 6 that aimed to stop the certification of President Joe Biden’s win was justified. An ABC/Ipsos poll showed that 52 percent of Republicans thought the insurrectionists were “protecting democracy.” That poll also had a frightening number of Republicans (72 percent) who believed Trump was the rightful winner. A CBS poll found that 4 in 10 Republicans think that the attack was actually a false flag operation by left-leaning groups to make Trump look bad, another unsupported conspiracy theory.

The steady stream of nonsense and deceit that the conservative public is swallowing comes directly from the top. Trump and his cronies obviously support it, but their rhetoric has found many local champions.

Perhaps the most starling example comes from Senator Ted Cruz. He was literally speaking out against the certification of the election minutes before the attack that drove him and his colleagues into hiding as insurrectionists stormed the halls. Even a year later and after fleeing for his life, he continues to insist that repeatedly questioning the election results was the right thing to do.

“We right now have a substantial chunk of our country that has real doubts about the integrity of the election,” he said on Face the Nation. “And if we had had a credible electoral commission do an emergency audit, it would have enhanced faith in democracy. But instead, Democrats and a lot of the press decided to just engage in incendiary rhetoric rather than acknowledge voter fraud is real. It is a problem and one of the allegations of voter fraud needed to be examined on the merits.”

Again, there has never been any substantial evidence that voter fraud was a factor in the 2020 election.

Governor Greg Abbott has been less overt about the stolen election than Cruz, but he still made election fraud a cornerstone of his draconian rollback of voter rights and access that passed last year. His allegiance to Trumpism is also apparent in the fact that he began demanding forensic audits into the state election, of course mostly focusing on the larger cities where Biden won. The move came shortly after Trump publicly demanded it.

The biggest proponent of the Big Lie in Texas political circles is easily Attorney General Ken Paxton. He, along with State Rep. Briscoe Cain (R-Baytown), were some of the state’s earliest acolytes in declaring the election stolen. Paxton went as far as to try and indict Travis County Clerk Dana DeBeauvoir for her handling of the election. DeBeauvoir was eventually cleared by the grand jury, but not before she was forced to pay tens of thousands of dollars in attorney fees to defend herself.

In spite of the violence and the damage that the Big Lie has done to American faith in democracy, Republicans continue to uphold it because of the power it has in bringing out conservative voters. One year later, even the ghost of the insurrection is not enough to deter them.