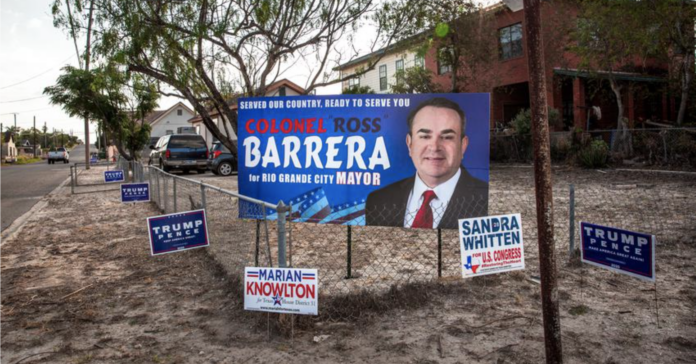 Republicans have gone all in on South Texas, but they’re not content for domination of state and congressional seats. They want local government, too.

One GOP group, Project Red Texas, spent the weeks before the December filing deadline to run in the March primary election traveling the region and recruiting candidates to run for county offices, offering to pay their filing fees. The group ended up helping get 125 candidates on the ballot across 25 counties, according to its leader, veteran party operative Wayne Hamilton. He said the group paid for “well over” half the filing fees.

“It’s a big deal, and a lot of it is that people are appreciative that someone is showing up to help,” said Hamilton, who managed Gov. Greg Abbott’s first gubernatorial campaign in 2014. “Somebody’s there, and they care enough to make an investment in their county. That’s what we’re doing.”

The focus on county-level recruitment is among several fronts where Texas Republicans are pushing to make South Texas, with a large population of Hispanic voters, more competitive for themselves. They are emboldened to get a stronger foothold there after President Joe Biden underperformed there. This past year, some of the biggest political fights have started at the local level, including debates over school books and COVID-19 mandates.

Project Red Texas is targeting county offices that are on the primary ballot — offices like county judge, county commissioner and justice of the peace. It cost $375 or $750 to file for county offices, but those fees are higher — $1,000 and $1,250, respectively — if the county has 200,000 or more people, which applies to South Texas counties like Webb, Hidalgo and Cameron.

Hamilton and an associate, Judson Stafford, found candidates by working with county GOP chairs and, in some cases, going out into the community, visiting places like barbershops and asking people who they think of when they think of local Republicans, Hamilton said.

Hamilton said candidates are being motivated by the “chaos at the border” under Biden, calling it the only thing some want to talk about.

Maria Yvette Hernandez, a local business owner who is running for Starr County judge, said she started thinking about running after having an issue with how the county was appraising commercial property at the start of the coronavirus pandemic. Then she said she saw “a lot of people coming out of the woodwork” to vote Republican in the 2020 election and observed they seemed to be voting on the economy more and more.

She said some local Democrats have suggested Republicans are filing only because their fees are being paid.

In many areas of South Texas, however, it appears to remain an uphill battle for a GOP breakthrough. Seats have gone uncontested for multiple election cycles, and voters are accustomed to voting for Democrats up and down the ticket.

Democrats say they are not worried.

“That Republicans are just now realizing people in South Texas matter after decades of being ignored by Republican politicians and their policies does not necessarily mean they have finally developed a conscience and are paying attention to what these communities need,” said Angelica Luna Kaufman, a spokesperson for the Texas Democratic Party.

She added that the state Democratic party does not have a program like Project Red Texas’ “because of the wealth of strong candidates in South Texas” and that people there “know who we are because we have always been there.”

Hamilton has had an informal ally in Cat Parks, the Texas GOP vice chair whose portfolio includes candidate recruitment. They have crossed paths throughout the region, and many candidates have gotten to know both Parks, Hamilton and Stafford.

Parks sees the South Texas recruitment as part of a broader effort to entrench the GOP more in local politics, which has seen a growing spotlight during the coronavirus pandemic and debates over school curricula. Last month, the Texas GOP formed a Local Government Committee to help county parties get more involved in nonpartisan elections.

“I think congressional seats have always been sexy, and national issues have always been really easy to pull talking points from, but what people have been really waking up to is these policies have been being made by people in their communities and they’re trying to hold them accountable in ways they haven’t in the past,” Parks said in an interview.

The recruitment blitz has helped people like Armando Rosales, who signed up to run for county judge in Maverick County, which is home to the border city of Eagle Pass and saw one of the nation’s biggest swings toward former President Donald Trump in 2020. Rosales is a political newcomer who has been an EMT technician since 2006 and helps Border Patrol with medical screenings. He also is a Texas peace officer who works part-time for the Kinney County sheriff’s office.

“The reason that I decided to do this endeavor is because I want to make a change in Maverick County,” Rosales said. “It’s a border town, and it’s run mostly by Democrats, but … there is a shift there, a noticeable shift there. We stand a chance, but we just gotta stand united and try our best to make sure people know what we stand for.”

Rosales met Stafford through the former chair of the Maverick County GOP, Alfredo Arellano, and Project Red Texas paid his filing fee. Rosales said that was “very helpful” in getting him to run.

Over the past two decades, only three people have run as Republicans for county offices in Maverick County, according to the vice chair of the county GOP, Rosa Arellano. But now eight are running in 2022, and Project Red Texas paid filing fees for seven of them.

In Terrell County, a sparsely populated county farther west along the border, Project Red Texas is already claiming victory. The GOP is set to capture a majority on the commissioners court after a Republican, mechanic Gene Chavez, filed for a seat that is on the 2022 ballot and currently held by a Democrat, while Democrats did not field anybody.

In addition to newcomers like Rosales, Project Red Texas is also aiding South Texans like Brandon Barrera, who has been long involved in GOP politics for years but sees a new opportunity to run. Barrera is a candidate for justice of the peace in Kleberg County.

“I knew that this would be a really good year to run, and there was an open seat,” Barrera said, adding that when it comes to GOP competitiveness in South Texas, “you have to build it from the ground up.”

Project Red Texas is a super PAC that began in 2017 with $500,000 in initial funding from Michael Porter, the GOP megadonor from the Hill Country. The group was down to $56,000 as of June, but Hamilton said it has since raised money from donors including state Rep. Mayes Middleton of Wallisville, some of the state House Republicans who are not returning and Dallas developer Mehrdad Moayedi.

Hamilton said his group spent the period after the filing deadline following up with candidates and making sure there were no problems with their paperwork. As the new year begins, they are starting to help candidates put together campaign plans.

Candidates like Hernandez say the group has been critically helpful, even if they already have some political experience or were already thinking about running. Hernandez ran for City Council before, she said, but for a race like the one she is now running — countywide — “I would’ve been completely lost without their help and education.”