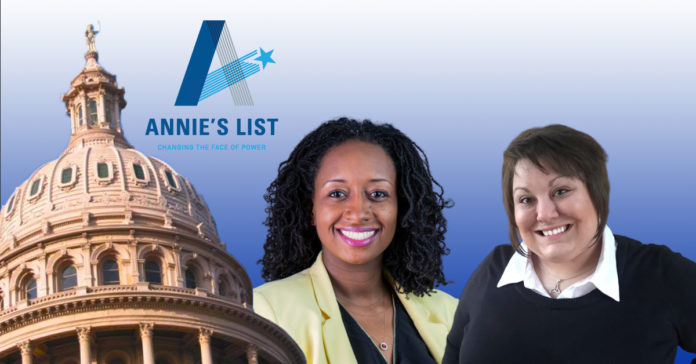 Eliz Markowitz and Lorraine Birabil each received an endorsement from the pro-choice group Annie’s List. Markowitz is a candidate for Texas House District 28 and Birabil is campaigning for HD-100.

Not to be confused with the home repair referral service Angie’s List, Annie’s List is a 16-year old organization that is dedicated to recruiting, training and supporting progressive women candidates across the state.

Since its inception, Annie’s List has helped more than 100 candidates win races across Texas. Birabil is one of five Democrats running to replace former representative Eric Johnson, who resigned his seat to run in the Dallas mayoral race.

She was an aide to U.S. Rep. Marc Veasey (D-Fort Worth) and was a staffer on the campaigns of Beto O’Rourke, Wendy Davis and Dallas County Judge Clay Jenkins.

Markowitz is the only Democratic candidate running in HD-28, which stretches from Katy to Rosenberg and from Simonton to Houston. The district had been represented by state Rep. John Zerwas (R-Richmond)  since 2006.

Zerwas announced his retirement from public office on July 31, which becomes effective on Sept. 30. Upon leaving office,  Zerwas, an anesthesiologist, will join the University of Texas system as an executive vice chancellor for health affairs.