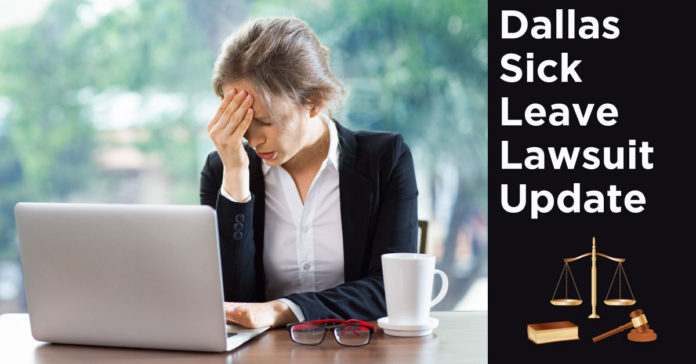 The ongoing lawsuit against the city of Dallas’ paid sick leave has attracted amicus briefs from some high-level supporters, amongst them are the state of Texas and the Dallas Regional Chamber of Commerce.

The lawsuit came after bills prohibiting municipal sick leave ordinances failed to pass this past session.

The Dallas lawsuit was originally filed by the Texas Public Policy Foundation on behalf of ESI Employee Solutions and the Hagan law Group — both businesses are located in the northeastern Dallas suburb of Collin County.

Despite the fact that both businesses are headquartered out of the Dallas city limits, the paid sick leave ordinance would require them to provide paid sick leave at the rate of one hour of paid time off for every 30 hours worked.

However, employees in smaller businesses would be allowed to carry over hours from year to year.

Dallas’ ordinance would extend PTO benefits to any employee who does at least 80 hours of work for pay within the city in a year, including work performed through a temporary or employment agency.

Independent contractors are not entitled to paid sick leave. When the Dallas City Council was crafting its ordinance the members looked at similar laws that had been passed in Austin and San Antonio.

Despite the fact that the PTO ordinances were passed months ago, only the one in Dallas has gone into effect. All three of the ordinances have faced legal challenges.

In November 2018, the Third Court of Appeals of Texas found Austin’s ordinance unconstitutional because it created a minimum ‘wage’ for employees — and Texas law reserves the power to create a minimum wage for the State Legislature.

This ruling has led to the  Alliance for Securing and Strengthening the Economy in Texas, a pro-business group formed to fight PTO ordinances, to proclaim that Dallas’ ordinance is unconstitutional and overly burdensome.

“The one-size-fits-all approach mandated in the Ordinance regarding the record-keeping and method of calculating paid sick leave is not practical for businesses currently operating in the region,” ASSET’s amicus brief states.