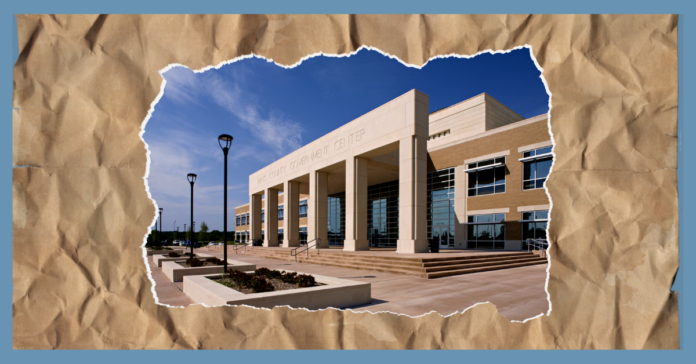 About a dozen activists demanding responses to conspiracy theories about election integrity this week disrupted what is typically an uneventful public testing of voting machines ahead of an election in Hays County.

The activists shouted at the county election administrator and Texas’s secretary of state, who was present for the testing. County officials said they’d never previously encountered such intense hostility at the routine event.

The crowd surrounded members of the election test board — which consisted of political party representatives, county officials and election workers — who were assigned to test the machines, pressing in and looking over their shoulders. Many filed into the election department’s large conference room at county headquarters holding notebooks and pens, ready to take notes.

As soon as the testing began, the activists began to raise familiar questions.

“Are the machines all connected?” one asked Jennifer Doinoff, the county’s elections administrator. “How many Bluetooth devices are there?”

No, the machines are not connected, Doinoff responded, nor were there any Bluetooth devices. The questioning continued, sparking side conversations and repeatedly drowning out the voices of those doing the testing. Doinoff, over and over, had to ask the crowd to lower their voices.

“Can we go back to focusing on the testing please?” Doinoff told the crowd. Attendees said they were at the public event — versions of which were held this week by many county election offices across the state — as “concerned citizens” and were not affiliated with any particular group or political party.

Texas law requires public testing of the voting machines be done before and after every election to ensure the machines are counting votes correctly. Half-a-dozen Hart Intercivic voting machines were spaced out on a large table inside the room, ready to be tested by the handful of county officials present to help.

Texas Secretary of State John Scott was on hand in Hays County, home to Texas State University, to observe the testing and film an educational video about Texas’s voting systems.

As testing of the machines continued in the background, the activists turned their attention away from the process, surrounding Scott and peppering him with complaints and prepared questions. Scott, a Republican, spent around 20 minutes listening and answering granular questions.

“No you’re not,” the activists responded, nearly in unison.

Esther Schneider, from Driftwood, was among those who gathered around Scott. “In France they do 100% paper and they have their election results at 11 o’clock on the night of the election. Why can’t we do that?” she asked Scott. France reports election results faster because elections there are run by the national government and also have fewer elected offices on ballots. The question has nonetheless become a common refrain among those who think 2020 was stolen, popularized by MyPillow CEO Mike Lindell, a well-known promoter of election conspiracy theories.

“I don’t know enough about France, but let me tell you this: I love how our state does this, and the people who I work with on a daily basis and the workers I’ve met throughout the state all have one goal, and that is to have safe and secure elections,” Scott told Schneider and the crowd. “Our system isn’t perfect, but good people are running this to help us have a good outcome.”

Their insistence on the superiority of the French election system was just one of several points raised by the Hays County attendees that mirrored misinformation spread by groups across the country that have seeded doubts about the outcome of the 2020 presidential election.

The Hays County activists also told Scott they believe voting machines are not trustworthy; they want hand-counting ballots of ballots and same-day election results; and emphasized the need for consecutively numbered ballots and to go back to precinct polling places rather than vote centers.

To date, despite investigations around the country, no one has found evidence of widespread voter fraud affecting the outcome of the 2020 election. An audit conducted by the secretary of state’s office found next to no problems.

Doinoff and her staff told Votebeat they weren’t discouraged by the rancor. Instead, the disruption and the questioning highlighted the importance of testing voting systems, also known as logic and accuracy tests, ahead of an election. That process has been standard practice for decades.

“I am still glad that people came,” Doinoff said. “We want them to see it and ask us.”

The purpose of the logic and accuracy tests is to make sure the voting systems are properly calibrated and will count correctly for the election, said Tammy Patrick, a senior advisor at the Democracy Fund and an expert in election administration.

Those who typically show up to run the test vary depending on the state and jurisdiction, but testers usually include representatives from the state and each political party, the county, the city, and members of the public. Some places livestream the test. The public and the media are invited to observe.

“It’s not necessary that every voter go and attend. But it’s important for them to know that part of the beauty of the system is that you have representatives in the room that have your best interest as a voter at heart,” Patrick said. “It is important that they all know that there are safety measures and protocols in place to make sure that machines count accurately.”

In Hays County, the test board of about 10 people worked in pairs to do the testing on each of the touch-screen machines. One person read votes from a pre-marked ballot listing real candidates out loud, while another made selections on the machine, which printed out a ballot. The ballots were then scanned into two tabulators, and the votes were compared with the pre-prepared ballots to make sure they were accurately tabulated. The testing encompassed accessibility features for disabled voters, along with language access features for non-English speakers.

The chaos in the room led to unusual hiccups, said Doinoff. After the first run of testing, three races did not match the results from the prepared ballots, which meant the test had to be repeated from the start. Workers began again, testing each of the machines with 29 sample ballots that had to be re-entered and rescanned. Most of the activists on hand did not notice.

The second test was successful.

“This is not common for our county. We usually get it done the first time,” Doinoff said. “But we’ve never had this many distractions before.”

Although logic and accuracy tests are typically not attended by crowds of people, some election administrators are making efforts to conduct outreach in hopes of using the tests to build trust in the process. Hays County has done this for years, and Doinoff said that around a dozen members of the public regularly attend such testing.

The Hays County elections office used newspaper announcements and a notice on the county elections website to invite the public. Doinoff also said she sent emails to local party chairs, election workers, and volunteers to remind them of the event.

This was the first time, though, has the crowd been so vocal.

“I had to keep reminding people to please let the test board focus,” Doinoff said. “We never had this much noise and chaos.”

To help further boost confidence in the process, other Texas counties are hosting more than one public test.

In Tarrant County, elections administrator Heider Garcia on Friday will host an additional testing opportunity for the public. This test, however, has not been done before in Texas and it’s randomized and unscripted.

Patrick said the more, the better. “The more people get involved in the process to be able to see all of the safeguards that are in place to protect the sanctity of the process, the better they should feel about the accuracy of how the machines and the system work,” she said.

This was Renee Rainey’s first time attending and participating in the logic and accuracy test. Rainey, who is a resident of Driftwood and a member of the Hays County Republican Women organization, said she wished more members of the public would attend. She was not among the group of activists raising questions.

“It’s important that the public gets to know the process so they know that, this isn’t scary and that isn’t something that’s secretive,” Rainey said. “This should be a celebration of people being able to vote.”

Votebeat is a nonprofit news organization covering local election integrity and voting access. Sign up for their newsletters here.