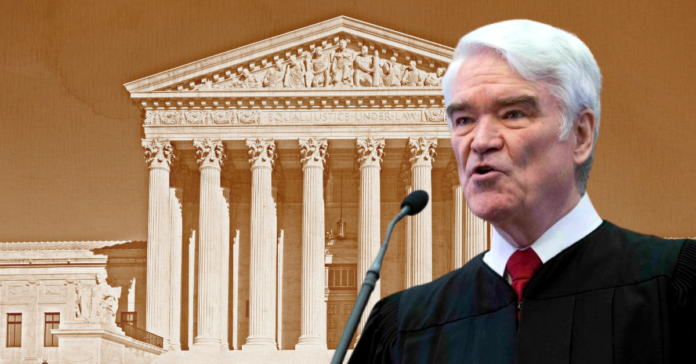 In the latest fight against wide scale takeover of the election system by Republican state legislatures backing the Big Lie, a group of state Supreme Court justices has filed a brief to the U.S. Supreme Court urging the court to reject a legal theory that could cede nearly all power to oversee elections to the states.

The case at the heart of the issue is Moore v. Harper, No. 21-1271, a relatively standard dispute over partisan gerrymandering in North Carolina. The state Supreme Court rejected a new map that was drawn to favor Republicans. What makes the case different from the dozens of others that have come before it is the counter-argument that North Carolina Republicans are using, sometimes called the “independent state legislature theory” or “ISLT.

In a radical reading of the  Elections and Electors Clauses of the U.S. Constitution, Republican lawmakers are claiming that state legislatures have the sole power to control all aspects of state elections and cannot be constrained by the courts. If embraced by the U.S. Supreme Court, it could mean that state legislatures alone would have the power to possibly overthrow elections that they didn’t like.

The case is serious enough that the Conference of Chief Justices, a group of the top judicial officers across the nation, have filed a brief with the U.S. Supreme Court to ask it to reject the legal theory. This is a highly unusual move, as the Conference rarely files briefs and almost never on such a politically charged subject.

“That the conference is willing to take a stand here highlights how extreme and dangerous the argument of the North Carolina legislators is,” Nicholas Stephanopoulos, a law professor at Harvard, told The New York Times. “That argument would undermine the authority of state courts to interpret state law — a bedrock principle of our system of federalism, and one that conservative justices historically championed, not questioned.”

ISLT started its life as a new way for Republicans to seize control in elections during 2000, when the U.S. Supreme Court used aspects of the legal theory to decide the presidential election for former Texas Governor George W. Bush. The majority opinion hinged on ISLT.

It’s become more prominent as many state legislatures, including Texas, increasingly use the unproven claim of massive election fraud to tip the scales toward Republican control of the electorate. Texas Attorney General Ken Paxton has already signed onto a brief supporting the idea that state legislatures alone should have control of the electoral process, and that any attempt to check their power is unconstitutional. He is joined by AGs from Alabama, Arizona, Arkansas, Kansas, Kentucky, Louisiana, Mississippi, Montana, Nebraska, Oklahoma, South Carolina, and Utah.

With the U.S. Supreme Court at an all-time partisan rightward shift, it’s possible that ISLT will find a willing audience who agrees that state legislatures should have universal power when it comes to elections, no matter how antithetical to the spirit of the Constitution that clearly is.