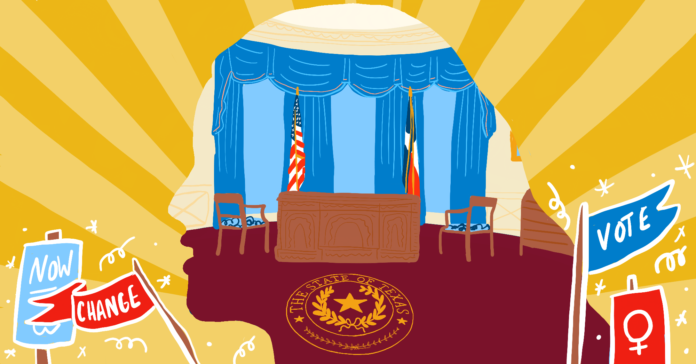 The 1992 election following Anita Hill’s grilling at the hands of the Senate Judiciary Committee during confirmation hearings for Clarence Thomas earned the sobriquet The Year of the Woman.

A year was not enough.

The Texas Tribune analyzed the state of the Texas Legislature before the 2018 elections, determining that if every woman running for a seat were to win her election, women would still make up only 44 percent of the body.

They did not all win, and in 2019, in a state that is almost equal in terms of overall population, a mere 23.8 percent of the Texas House and Senate combined were women.

Perhaps both “year of” and “THE woman” set us up for disappointment—too short a time period, too few women.

A survey of candidates in the 2020 election across Texas suggest The Generation of Women may be upon us, their effect on the political system less like the sudden crash of one giant wave and more like a constant erosion, different eddies and oxbows wearing down different areas along the bank.

Forty-six women are running for the legislature in Texas this year. Notably, 13 of them launched campaigns against female incumbents.

Rep. Erin Zwiener (D-Driftwood), who campaigned while pregnant with her first child, had to confront people who thought she should stay home with her family. Have this year’s cohort of candidates experienced similar push-back based on gender stereotypes?

“I don’t do identity politics,” explained Rhonda Seth, E.R. nurse and one of two women and five candidates running in the Republican primary for House District 25, vacated by Speaker of the House Dennis Bonnen. “No, I have not experienced that. As of now, all voters care about are the issues.”

Erin Gamez, challenging incumbent Rep. Eddie Lucio, III (D-Brownsville) in the Democratic primary, laughed at the question. “If they are, they’re not saying it to my face!”

Paige Dixon, a Democrat challenging a first-term incumbent from the same party, Rep. Michelle Beckley (D-Carrollton), admitted that the only reason she was returning a reporter’s call instead of block-walking was that she was caring for a sick child.

But even with her status as a mother of young children, no one has questioned her ability to run or serve.

What they have questioned, when she knocks on their doors, is whether anyone in Austin will advocate for them.

“People just use us for votes to get to Austin,” they tell her. She shares their exasperation.

Dixon used education funding as an example. While the state’s 2019’s education funding bill allocated over $6 billion for schools, her own school district still cannot afford to hire enough teachers to operate the full-day pre-kindergarten program.

“In the time it takes to fix that in the next session, those three-year-olds will be five-year-olds.” Her decision to run was not difficult, because the need was apparent to her. “I felt compelled to do something.”

Lt. Col. (Retired) Vanessa F. Hicks-Callaway, like Dixon, is also running against an incumbent woman in her own party. Rep. Geanie Morrison (R-Victoria) has held the District 30 seat for over twenty years.

“Party insiders have not placed an arm around me and said, ‘Welcome to the race, here is how I can help you,’” Lt. Col. Hicks-Callaway shared.

Guided by her faith, however, and in keeping with a very intentional decision making process, she was not deterred.

She availed herself of multiple training programs and a campaign seminar which built on her experience volunteering in leadership roles on multiple campaigns. She suspects that party insiders’ tepid reaction to her candidacy was meant to discourage her.

“The issue that motivated me to run for the Texas House for this election cycle was me noticing the effort to ‘Turn Texas Blue.’ I want to fight back. I do not want to see Texas become a liberal state.”

In 1992, the story of women running was almost exclusively women’s reaction to the Thomas hearings, so much so that a woman who didn’t run, Anita Hill, is cited more often in stories about that year’s election than many of the women who won seats in Congress.

Erin Gamez points not to an issue that can be solved with one bill, but with the overall struggle to survive in economically-depressed Cameron County.

But she also suggests that voters want to be part of this new era of Texas politics, and the echoes of ’92 reverberated as she told the story.

“They love that a young woman is running. They tell me ‘it’s time,’” Gamez shares, her smile through the phone line, clearly energized by this reaction. They tell her “I want my daughters to see what you’re doing…come speak at my school and show them they can do this.”

Demographically, the face of Texas will look radically different in 2040. Will ‘women in politics’ still be the story, or will Gamez’s generation be the one that makes the final push to gender parity?