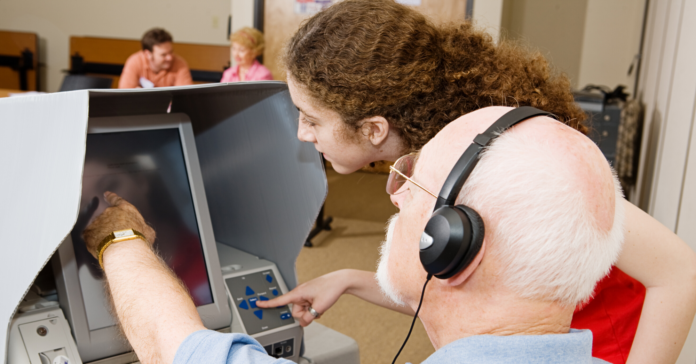 Early voting lasts until 7 p.m. on Friday, Nov. 1. This gives Texans a little more than 48 hours to participate in early voting. This year there are important issues on the ballot, including a bond amendment related to cancer prevention and research.

Three districts (28, 100, and 148) have special elections this year, and Houston will decide whether to give Mayor Sylvester Turner another term. Some people do need convincing about early voting.

We spoke to two Houston-area poll workers to find out what makes early voting a good idea. Here’s what Joy Davis, serving in her first year as a poll worker, and Christopher Drexler, with six years of experience, had to say.

1. You can early vote with your kids

Don’t have a babysitter? No problem.“It’s important that you bring your kids to vote,” says Davis. “Then your children can see that someone they love, their parents, value the importance of voting. It can become a tradition. You can bring your kids,” says Drexler. “You just can’t take a selfie in the polling line. You can’t let them push the buttons either. You can get them an “I Voted” sticker, though. Lots of younger children love that.”

2. The lines are shorter for early voting

Early voting is the single best way to avoid lines. On the first day of early voting casting a ballot can take minutes.“You’ll be in and out in no time,” says Davis. “That’s not going to be the case for Election Day. The most you’ll spend is 10 to 15 minutes if that. The parking is easier and there is less congestion.”

3. You can do early voting on your schedule

Rather than having everyone in the office take off on Election Day, early voting allows people to stagger quick poll trips to minimize interruption.“Come during your lunch break or after you pick your kids up from school,” says Davis.“If you come on Election Day, you know, that’s Election Day,” says Drexler. “If you go to early voting you have a lot of choices on time and date.”

4. Early voting makes it easier to help others

Crowded Election Days can be rough on people with mobility or sensory issues. Early voting has advantages, including that it lets you go when things are less crowded. It also allows voters to cast ballots between doctor visits.“With more options, you can coordinate a ride with a friend who needs one to vote,” says Drexler. “If they’re elderly or disabled, you can help them out.”

If you’re unsure who or what is on the ballot, you can print sample ballots from county websites. HarrisVotes.com has everything you will need in Davis and Drexler’s territory.

6. You can vote at any location, but that’s not just for early voting anymore

One of the previous draws in early voting in Texas was that you could go to any location. Thanks to a recent change in state law, that’s something you can do on Election Day as well.

Be warned, though — central locations might overcrowd as a result, so you’re still doing yourself a favor by voting early. Don’t count on the ease of early voting on Election Day just because there are more locations available to you. It will take several cycles to see how it plays out in practice.

“Don’t wait until the last minute to vote,” says Davis. “You could have an unexpected medical emergency. Our weather changes so drastically and flooding could always be an issue.”

“If it’s a miserable cold, rainy day on Election Day, you can’t control that,” said Drexler. “With early voting, you get to choose.”

Beyond catastrophes, early voting can also help you avoid protesters and “poll watchers” who might try to influence or discourage your participation. For many voters, especially marginalized people, this can make the experience feel safer.

“Voting early helps to decrease the risk of voter intimidation,” said Davis. “Don’t let the few decide for the many. Voting is powerful.”

9. People will stop bothering you

“Once you vote, all those calls and texts telling you to go do so stop,” says Davis.

Author’s note: I vote on the first day of early voting. Partially, so I can respond to every Facebook argument about candidates with “this no longer applies to me.” I highly recommend it. -Jef

There is no better reason to early vote than to make sure that you actually get to.“Our votes are extremely important, and they matter,” says Davis. “Do not believe that your vote is not important. The candidate that will be elected into office will directly impact your life. Wouldn’t you rather have a say in which candidate gets elected?”