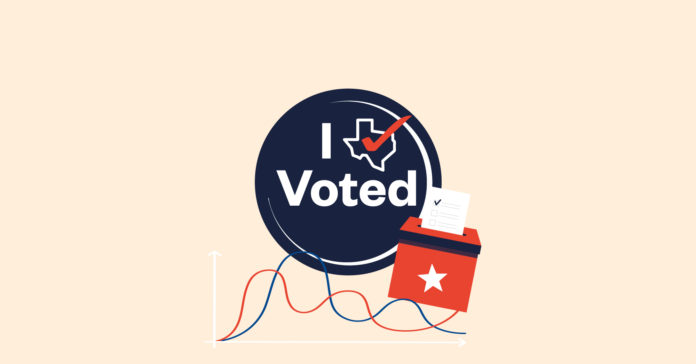 The first week of early voting in the 2020 Texas Primaries has come to an end, and early voting turnout has been strong across the Lone Star State.

According to data from the Texas Secretary of State, after a week of early voting in the 2020 Texas Primaries more than 647,500 people in Texas’ largest 20 counties have cast their ballots early in person and by mail in the Republican and Democratic primary elections.

With more than 11.4 million people registered to vote across those counties, around 5.36 percent of the total voting population has turned out to vote early in the state’s top 20 counties. By the seventh day of early voting, 550,292 Texans within those same 20 counties had voted in person, and 97,222 Texans have returned their ballots by mail for both primary elections.

To break it down even further, more than 9.2 million registered voters are within the state’s largest 10 counties. As of the seventh day of early voting, almost 438,900 of them have already voted early in the 2020 Texas Primaries – about 4.76 percent of registered voters.

In comparison, around 8.6 million people in the largest 10 counties were registered to vote in the 2018 Texas Primaries. By the seventh day of early voting, only about 353,887 people had voted early in person and by mail in the election – that’s about 4.11 percent of registered voters.

Below is a breakdown of turnouts for the first week of early voting in each of the state’s 20 largest counties.