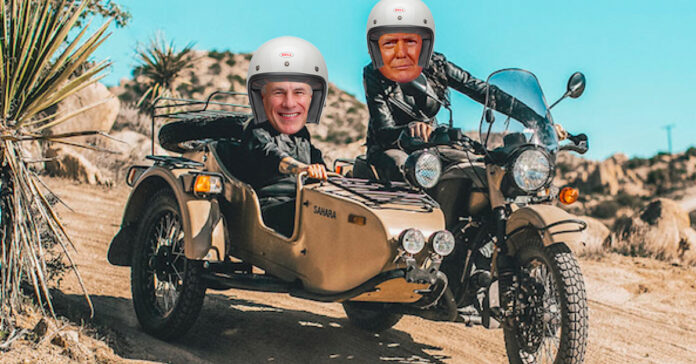 An avid follower of Trump’s playbook, Abbott has been closely following every instruction. From wall-building -through a $250 million down payment from the state budget- and repeated crowdfunding schemes, to exceeding their constitutional powers.

The line between both of them is so blurry, it is not quite clear whether Abbott is working for Texan priorities or for Trump’s.

A few weeks ago, Governor Abbott declared immigration through the border as a disaster, a move that grants him emergency powers to stretch state laws and regulations with the purpose of allocating resources to the declared disaster.

This precise declaration allowed him to reallocate the $250 million down payment for his wall project.

In a statement, State Rep. John Turner said Abbott’s use of a disaster declaration to reallocate legislatively appropriated funds to a project from his office stretches the concept of emergency authority “to its breaking point.”

The fact that Abbott is overstepping his boundaries in an effort to follow Trump’s footsteps has people wondering if he is actually putting Texas first, or if these actions will grant him some sort of vice-presidential golden ticket.

“Greg Abbott is a fighter and a Great Governor for the incredible people of Texas. No Governor has done more to secure the Border and keep our communities safe than Governor Abbott,” Said Donald Trump in his endorsement for Abbott.

One thing is certain, the constant mimicking, the repeated speech, the border and fraud obsessions, and their endorsements towards one another -even during riot incitements – have been raising questions on the type of relationship they are building.

Texans are now left to wonder… perhaps the type of relationship required among a President and his VP?