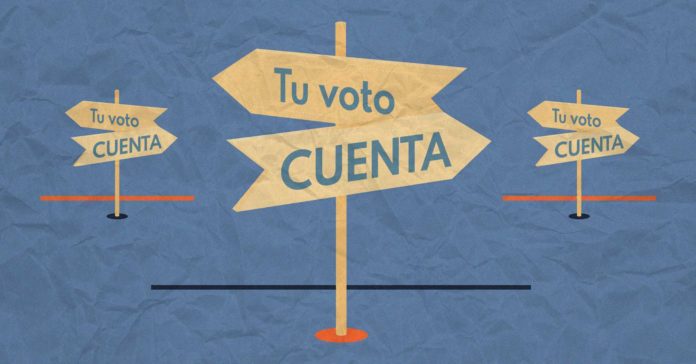 Less than a week before early voting begins in Texas, Democrats and Republicans are scrambling to win over Latinx voters as both parties see them as critical in determining the outcome of the election.

The Latinx population accounts for nearly 40% of the state’s population, and it is expected to become the largest population group by mid-2021. The group has grown by more than 2 million since 2010, and Texas is now home to 11.5 million Latinx residents.

But while Latinx people are the fastest growing demographic group in Texas, their population numbers haven’t corresponded with voting participation, with a turnout that historically has been more tepid than robust.

Turnout among Texas’s Latinx voters climbed to about 1.87 million in 2018, nearly double the number that voted in 2014.

The results of a new poll indicate this could be the year that a long-awaited surge in Latinx voting could occur this year. The poll conducted last month by the University of Houston’s Center for Mexican American Studies and Univision found that 90 percent of national and Texas Latinx voters are likely or certain to vote in the Nov. 3 election.

Separately, an analysis by the Texas Hispanic Policy Foundation of polling, historical results and turnout projections determined that Biden could narrowly win Texas by capturing two-thirds of the Latinx vote.

“Hispanic voters will decide who wins Texas, said foundation President Jason Villalba, a former Republican state representative from Dallas. “While we expect the majority of Hispanics will support Biden, the size of that majority will determine who will get Texas’ 38 electoral votes.

“A surge in Hispanic support for Biden could turn the state blue,” Villalba said. “Both campaigns should be taking Hispanic Texans very seriously right now.”

A poll conducted for the nonprofit foundation in August by Mark P. Jones, the foundation’s research director and a political science professor at Rice University, predicts that Biden will win 58% of the Latinx vote in Texas, but Trump will win the state with 52% of the total vote.

The foundation predicts that Latinx people will account for 27% of the vote electorate this year, up from 24% in 2016.

“So far, Biden has not performed as well among Texas Hispanics as Hillary Clinton did in 2016, and that works to Trump’s advantage,” Jones said.

Texas’s Latinx voters have never been reliably Democratic voters and many, particularly long-time residents of South Texas and Rio Grande Valley, have favored Republican candidates, according to political observers.

Since many Latinos are Catholic, they tend to support the pro-life stance of the Republican Party, she said.

As a result, the support of these Latinx voters helped politicians such as George W. Bush, Rick Perry and Greg Abbott in their quests for gubernatorial and presidential wins.

But the allegiances of Latinx voters have shifted toward Democrats for a variety of reasons, including exclusionary immigration policies, inflammatory rhetoric from the White House that led to the Walmart massacre in El Paso, cut-backs in federal poverty programs, high rates of infection and death among due to the pandemic and the fiasco at the border that has kept children locked in cages, observers say.

“The gravitation of Latino voters to the Democratic Party, combined with an explosive growth of coming-of-age young Latinos who are move progressive, has been the central narrative in Texas becoming politically competitive,” said Brandon J. Rottinghaus, professor and Pauline Yelderman Endowed Chair of political science at the University of Houston.

With Democrats treating Texas as a battleground, the Biden campaign announced that it will spend up to $6.3 million on advertising in Texas, while the Texas Democratic Party is investing several million on adds targeting Black and Latinx voters in the final weeks of the campaign.

Also, the Lincoln Project, a national group of disaffected Republican operatives working to defeat Trump, announced it plans to spend $1 million in Texas against Trump, a move that brought a strong rebuke from Republicans.

“It is highly disturbing and quite disgusting that a group of so-called Republican strategists using the name Lincoln Project is planning to spend $1 million against President Trump,” said Allen West, chairman of the Republican Party of Texas. “It is unconscionable to me … that there are these useful idiots who would seek to undermine the hard work and efforts being put in by the RPT, Republican candidates and grassroots supporters to re-elect President Trump.”

“There has never been a more exciting time to be a Texas Democrat,” said Texas Democratic Party Executive Director Manny Garcia. “In 2020, we will win the White House, take out John Cornyn, send more Texas Democrats to Congress, flip the Texas House and elect hundreds of local Democrats across the state.”

“I will be very honest with you, the Republican Party of Harris County, the precinct chairs, do not represent the majority of conservatives in Harris County,” Sanchez told the Houston Chronicle. “We’ve got to diversify our party at the grass-roots level.”

Among its efforts this cycle, the group is sending out mailers, paying for digital ads, reaching out to Spanish-speaking voters by phone and block-walking for some candidates.

The Republican Party’s outreach to Latinx voters has included visits by West to Laredo, El Paso and Rio Grande Valley to meet with Latinx pastors and law enforcement officials along with joint events with Hispanic Republicans of Texas, West told the Houston Chronicle.