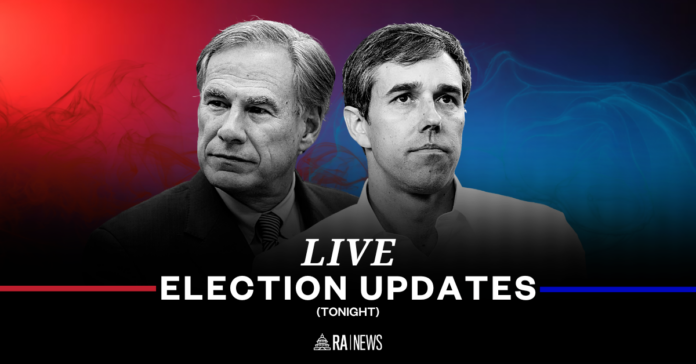 The polls have closed across Texas, except in El Paso, which is in a later time zone and still has one more hour of voting to go. Texas allows the counting of mail-in ballots and votes cast during early voting before the polls close, so those early numbers should start coming in soon.

There was an uptick in votes cast in Texas during today and in the last two days of early voting with Texans trying to get to the polls before it was too late – due to this, voting wasn’t as brisk, and long lines were expected.

Nearly 5.46 million Texans cast ballots in person or by mail during the early voting period, which is about 31% of all registered voters, while 2018 results indicated that statewide early voting turnout was nearly at 40%.

The 2018 election ultimately had a total turnout rate of 53%; the rate for 2022 lags far behind that with only Election Day on Tuesday left for voting.

At 7 pm, polls closed. At 7:01 pm some counties will begin reporting their vote totals. If there are still people in line to vote, counties may not release their data immediately.

The first results that will come in will be from mail-in ballots and early voting. As the night progresses, Election Day totals will begin coming in.

Lastly, Ryan Data & Research recommends keeping an eye on the location of where vote totals are being cast. A candidate could appear to be up in the race, but only because the votes reported came from a very favorable portion of the district and there might still be unfavorable areas that haven’t reported any data. So, expect shifts in margins and percentages throughout the night.