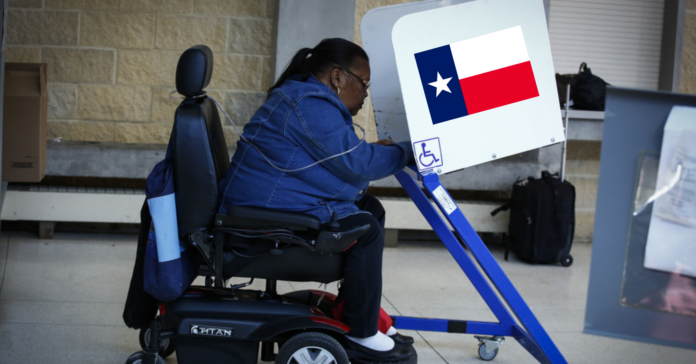 It will no longer be a felony to assist voters with disabilities or those with limited English.

A month ago a federal judge in Texas issued a ruling that strikes down provisions in a Texas law, known as Senate Bill 1, that sets limits on how people can help voters cast their ballots. According to KUT politics, state officials had until last week to appeal the ruling, but declined.

The voter assistance case was brought by the Organization of Chinese Americans-Greater Houston, which in January asked the court to block the provisions in SB 1, arguing it violated a 2018 injunction that ruled that similar limitations in Texas’ election code at the time violated the federal Voting Rights Act.

They argued the provisions unlawfully restricted assistants to the point that this group of voters would be denied an equal voting experience.

In addition, the court barred Texas from including those restrictions in the language of an oath an assistor must swear to when helping voters.

According to The Houston Chronicle, SB 1 requires people aiding voters to fill out paperwork disclosing their relationship with the voter and whether they are compensated. It also requires they recite an oath under the penalty of perjury stating they did not “pressure or coerce” the voter into choosing them for assistance.

Lisa Snead, a litigation attorney at Disability Rights Texas, said the provisions made it harder for voters with disabilities to vote this year, and many ended up voting without an assistant.

“A lot of folks with disabilities did not want to put their personal care attendants in a position of having to swear an oath that they would not be able to swear, that would not be true because they had provided more assistance than that, and then potentially open them up to criminal penalties,” Snead said. Others were “just concerned that if assistants had to do that, then they would refuse to assist.”

“We have moved a little back towards folks with disabilities having some of that same access that they had before SB 1,” she said. “There is still much to be done. There are still limitations in place, but it’s not quite as bad as it was before.”