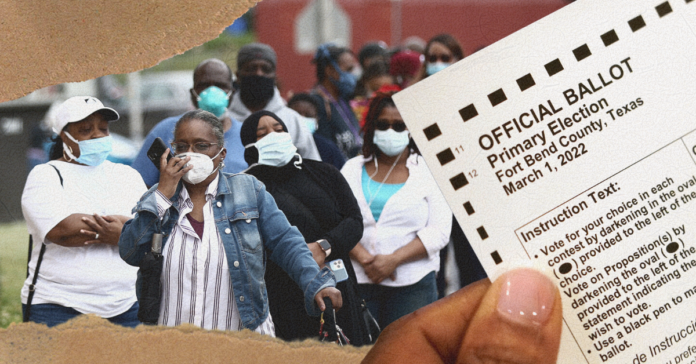 Some Texas voters have recently received letters notifying them that their vote from the primary campaigns earlier this year never counted. A new state requirement has confused many voters and led to unusually high ballot rejection rates statewide.

According to a new study, just the addition of one new requirement caused massive disenfranchisement and major racial disparities.

The study, which was conducted by New York University’s Brennan Center for Justice, found Latino, Asian and Black voters were significantly more likely to have both voting applications and their ballots rejected under the new requirements.

That requirement mandates that absentee voters include either a driver’s license number or the last four digits of their Social Security number on their mail-in ballot.

But here’s the catch — if voters forgot which ID number they had previously given on their ballots, they either accidentally put the wrong number or left it blank.

For example, if a voter had listed their driver’s license number when they registered to vote, but inadvertently put their Social Security number on the ballot, it was rejected. And older voters who first registered to vote would have no way of knowing what ID number they used decades ago.

The 2021 law was passed by Texas Republicans in the name of election integrity, even though no significant voter fraud occurred in the 2020 election. Voting rights advocates oppose the new voting restriction, which is part of the law called SB1 signed by Gov. Greg Abbott last year.

Thus, they created and enacted new voting law restrictions that have now proven to negatively impact voters of color and other minority groups during the primary elections.

The study also found the following —

The data show that nearly 25,000 ballots were rejected in the March 2022 primary, and voters of color were 50 percent more likely than white voters to have their mail ballots rejected under the new restrictions.

By comparison, in 2020 Texas rejected just under one percent of mail ballots that saw more than 11 million people, according to federal data.

But this year, the rejection rate spiked to 12.4 percent statewide in the March 1 primary. It was more pronounced in Democratic primaries, at 12.9 percent compared with 11.8 percent of Republican ballots, according to John Scott, Texas Secretary of State’s office.

The bill also prohibits election officials from encouraging voting by mail, which affects many voters across the demographic spectrum.

With many medical experts predicting a return of Covid variants this winter, this aspect of the law is especially concerning.

Record numbers of Americans voted in the November 2020 election despite logistical challenges presented by the COVID-19 pandemic, as well as record numbers of early voters. Over 100 million cast their votes early in 2020, either in person, by mail-in, or by absentee ballot.