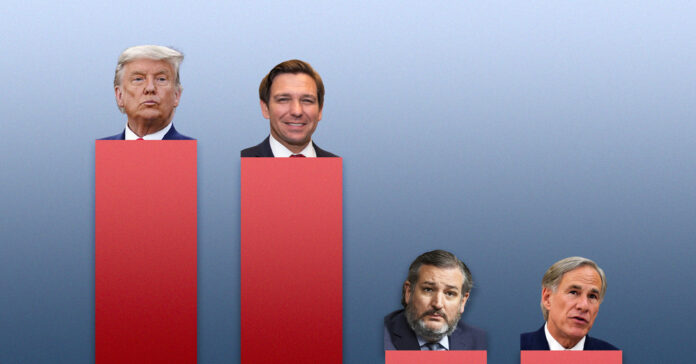 Packed with widespread fraud allegations, cheering for people who chose not to get vaccinated, praising capitol rioters as heroes, chanting for voter restriction, and banning race theory from being taught in schools, this year’s CPAC seemed more of a live display of the GOP’s fake news collection, rather than actually taking action on anything.

Activities also included handing out a plan to reinstall Trump as president by electing him speaker of the House and auctioning a picture of him hugging and kissing the American flag, which went up for $25,000.

But perhaps the most noteworthy activity carried out during CPAC was the informal straw poll that conservatives conducted, where attendees were asked to pick their favorites for a possible Presidential run in 2024.

There were two versions of the straw poll, one that included Trump’s name on it, if he were to consider running again, and another one without him.

On the first poll, Trump expectedly came on top with a landslide win of 70% of the votes, with Florida Governor Ron DeSantis following with 21% of support, not quite comparable with Trump but still way ahead of everyone else.

According to CNN, DeSantis cruised in the straw poll that did not include Trump. He got the backing of 68% of CPAC attendees, followed by former Secretary of State Mike Pompeo at 5% and Donald Trump Jr. at 4%.

Notably, on both lists which included roughly a dozen candidates, both Ted Cruz and Greg Abbott had 0% of GOP support. With absolutely no one backing them on the CPAC, it’s still time to consider whether anyone really wants to see Cruz or Abbott run for the White House.