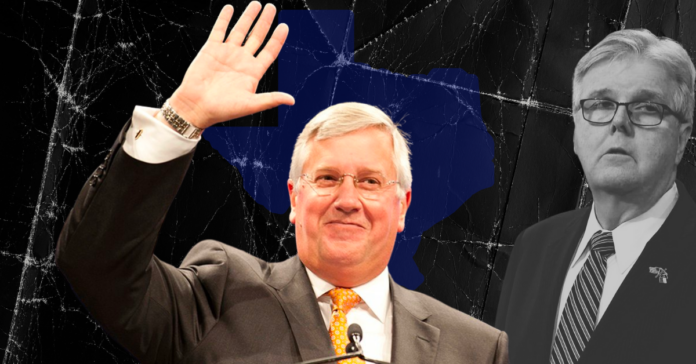 Retiring Texas Senator Kel Seliger of Amarillo told the Quorum Report on Tuesday that he intends to vote for Mike Collier, the Democratic nominee for Lt. Gov., over the incumbent Republican, Dan Patrick. This comes on the heels of Republican Tarrant County Judge Glen Whitley’s announcement Sunday that he is endorsing Collier for Lt. Gov.

Whitley has clashed repeatedly with Patrick for years, and specifically cited state legislation over property taxes as a key reason for endorsing Collier. His announcement came on Y’all-itics, a WFAA politics podcast.

“Dan Patrick came on the scene in 2006 with Empower Texans,” Whitley said, “and since that point in time they’ve basically declared war on local elected officials. They’ve blamed local governments for all the property tax problems.

Whitley noted that Collier worked for Exxon, “so he understands the oil business.” He also said that he believes Collier “understands local control, and that’s what I’m looking for.” Whitely mentioned laws that the state passes requiring action by local governments, but that don’t come with any funding, or “unfunded mandates.”

“We’ve got over 700 people sitting in our jail today that belong to the state. They’re not paying us for them,” he said.

Whitley also pointed out that Patrick and the GOP Legislature limited property taxes, a major source of revenue for local governments. So, in effect, local governments are being required to do more by the state, but then they hobble local governments’ ability to raise the revenues necessary to carry out the mandates.

Patrick led the effort in 2019 to pass Senate Bill 2, which aimed to slow the growth of Texas property tax bills. The law requires many cities and counties to hold an election if they wish to raise the property tax rate by more than 3.5% from the previous year.

Sen. Kel Seliger, who is not seeking reelection, has clashed with Patrick for years. The former mayor of Amarillo has been a moderating force in the Republican Party and a thorn in the side for Lt. Gov. Dan Patrick. Seliger, who Patrick has called the “most liberal” Republican in the state, has voted against various tax measures and private school voucher legislation put forth by Patrick. Seliger also declined to endorse the lieutenant governor for re-election. As a result, Patrick backed numerous right-wing challengers to unsuccessfully oust Seliger.

“The Republican Party in Texas has gotten to be one of litmus tests and conformity,” Seliger says. “Everybody’s got to believe exactly the same way about everything or you’re a RINO.”

Seliger’s district was redrawn last year in a way that Seliger felt was an attempt to oust him after years of conflict with Patrick. He said that his district had been redrawn “to benefit a potential Republican primary challenger from Midland preferred by the Lieutenant Governor.”

In a January 19 deposition, Seliger discussed the “profound and vindictive” reprisals Lieutenant Governor Dan Patrick delivered to those who defied him.

Lt. Gov. Patrick was dismissive of the two Republican mavericks. Through a spokesperson, Patrick said, “the post Labor Day Dinosaur parade has begun,” and brushed them off as “desperately searching for relevance.”

With the election season heating up, time will tell if any other Republicans will join their colleagues in defying Patrick’s hold on the state GOP, or whether these two Republican leaders’ support for a Democrat is a harbinger of things to come. Will GOP voters cross over this November in the Lt. Governor’s race or other statewide offices like the Attorney General’s race, where polling indicates a tight race?