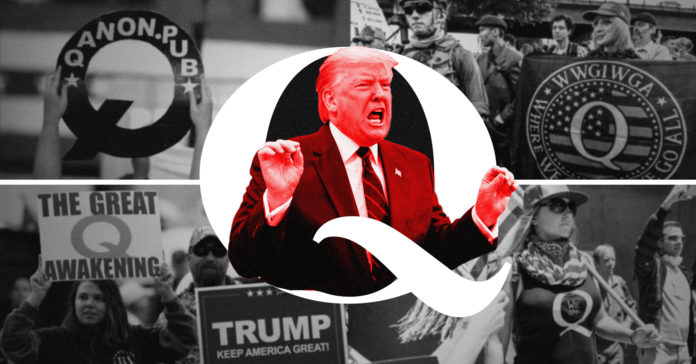 Editor’s note: This is part one of a two-part series.

QAnon is a radically pro-Trump collection of conspiracy theories loosely based around the idea that the Democratic Party, Hollywood elites and wealthy Jewish people are all part of a Satanic pedophilia cabal that may or may not stretch back centuries. President Donald Trump, along with parts of the United States military, is believed to be a hidden savior whose election was merely part of a plan to root out Deep State operatives who perpetuate this unholy organization. It’s arguably America’s fastest growing set of beliefs at the moment. As Texas stands on the brink of being a swing state that may help deny Trump a second term, QAnon is starting to go quite mainstream and gain a foothold in the Lone Star State.

The Texas Republican Party is being criticized for appropriating QAnon language in recent statements and using them as coded allusions to the conspiracy theory believers. The party adopted the slogan “We Are the Storm.” The storm is a common QAnon concept that refers to Trump eventually moving against the cabal. The name comes from an off-hand remark Trump made in 2017 about “the calm before the storm” which was picked up and dissected by QAnon followers for a greater meaning. In many ways, the Armageddon-like storm and its vindication of QAnon beliefs has overtaken the actual conspiracy theory, turning into a vague prophecy of salvation that is increasingly a prime political force.

In a statement issued in response to a New York Times article the Republican Party of Texas indicated the slogan has biblical roots and comes from a favorite poem of party chair Allen West.

“The ‘We Are the Storm’ poem is one of Chairman West’s favorite quotes to use in speeches,” the statement read. “He and the entire Texas GOP will not be bullied by partisan leftists in the media into ceding powerful phrases with biblical roots — taken from Psalm 29 — to internet conspiracy groups.”

Psalm 29 references thunder but does not actually use the word storm. The true origin of the poem appears to be from a meme shared by football player Tom Brady.

Despite the denial by Texas Republicans of involvement in the QAnon culture, multiple demonstrations have been held in Texas in support of QAnon ideas. On Aug. 8, a rally at the Tarrant County courthouse featured people holding signs supporting various tenets of QAnon, including “Pizzagate,” which holds that a Washington D.C. pizza restaurant has a child sex dungeon run by the Clintons (it was not). Similar events were planned in other major Texas cities.

The rise of QAnon is unique in the realm of conspiracy beliefs, according to Kathryn Olmsted, author of the book “Real Enemies: Conspiracy Theories and American Democracy, World War I to 9/11.”

“One of the things that is different is that if you lost an election, your side usually does more conspiracy theories,” she says. “The Trump Era is unusual because he has the power. He’s the winner, and yet his strongest supporters are the biggest believers. Political science teaches us that conspiracy theorists are literally losers. One possible explanation is because he didn’t win the popular vote and so they feel like losers. They are lashing out because of that. It’s also possible they feel like the losers of the culture wars, and even though they control most institutions they still feel besieged and victimized.”

Another aspect is Trump himself. Though many presidents have spun the truth in the name of pursuing their administration’s agendas, none has indulged in the personal promotion of conspiracy theories like Trump. His introduction as a possible candidate for president came from spreading the racist birtherism theory that Barack Obama was not born in America. Since then, an entire Wikipedia category has emerged for tracking the president’s conspiracy theories. With the commander-in-chief himself part of the Godwin Hole of congealed crank ideas, QAnon has become an inescapable aspect of conservative politics.

“Trump is the first president to spread conspiracy theories to this extent,” says Olmsted. “He’s not just demonizing foreign armies like other presidents did. He got into birtherism, anti-vaxxer beliefs, and on and on. He is indiscriminate about spreading them. The jury is still out whether more people believe conspiracy theories now than before, but there’s no arguing that more leaders do.”

Unfortunately, there is little that can be done about it. The question of how to “deprogram” loved ones that have fallen into what is essentially a political cult is a popular subject of think pieces, but the answer remains “not much.” Olmsted says that conspiracy beliefs have often lent feelings of power and prestige to those who hold them, as well camaraderie. Before people would meet in person to discuss new data on who killed JFK. Now they congregate on internet message boards like 8chan, now 8kun, which is the website where the suspected El Paso shooter posted his manifesto. Once they descend into a miasma of misinformation, only they can pull themselves out since outside parties illustrating the nonsense only drives them further in.

“I think it’s very important to have a sense of community,” says Olmsted. “There’s no satisfaction if you can’t tell others. They used to meet at the local library. Now they meet on the internet, and it gives you a sense of belonging. You can reason with people who are just a little conspiracy curious, but there are some people who are either prone to magical thinking or they’re just really committed to the ideology of conspiracy theories and they can’t be changed. Social science has shown correcting them only makes them more committed.”

Which leaves the most pressing question: what do you do when that stops being a former high school friend or random uncle and starts being the party that controls all three branches of government in your state? Is the Texas GOP merely conspiracy curious, or have they gone down the rabbit hole? Reform Austin will delve deeper into those questions in part two of this story.