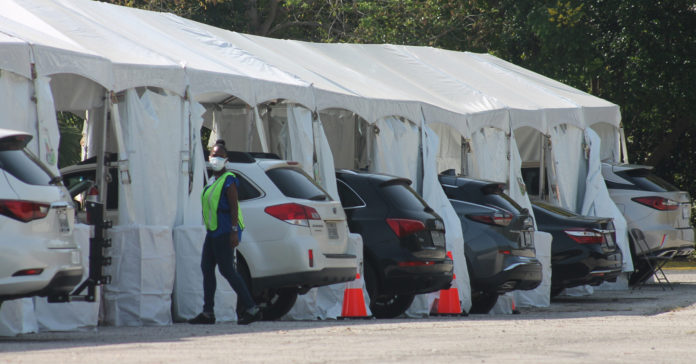 As the Texas Supreme Court weighs whether it is legal, Harris County seeks assurances that Texas Secretary of State Ruth Hughs will continue to support drive-thru voting, according to the Houston Chronicle.

Hollins has, so far, not received word back from Hughs’ office.

Paxton argues that drive-thru voting is an illegal expansion of curbside voting because it is being offered to anyone, rather than just those voters who are unable to physically enter the polling place.

Harris County says drive-thru voting is not the same as curbside voting at all because voters are casting their ballots inside buildings and temporary structures.

The Texas GOP last week filed a lawsuit to halt Harris County from offering the service. The case is now pending before the Texas Supreme Court.

On Wednesday, Republican rabble-rouser and Veteran’s Militia founder Len Swanson alleged a government-backed conspiracy to commit voter fraud in Harris County. He provided no evidence to back up his claims, only repeatedly referring to some sort of photos on his phone and a visual aide that made no sense and appeared to have been drawn by a child.

“I think it is clear now that voter fraud and ballot harvesting are evident and that most of the population of the country realizes that there is major voter fraud going on,” he said. “Here in Harris County, we have boots on the ground. We have lots of investigators out there watching every step of the way.”

Swanson claims to have no beef with the regular polling locations. It is just the drive-thru voting.

“There is no way that you can tell what is going on and so, that is our bone of contention is that it is ripe for ballot harvesting,” he said.

“Drive-thru voting is a safe and convenient way to vote that is completely legal,” Hollins said in a statement posted on Twitter. “Texas Election Code allows it, and the Secretary of State approved it. The Harris County Clerk’s office is committed to counting every vote cast by registered voters in this election.”

Swanson’s news conference went on for 42 minutes, and ended with the blowing of a shofar.

He says he was serving as a poll worker but was relieved of duty.

As of Wednesday, about 70,000 people had cast their ballots using drive-thru voting.