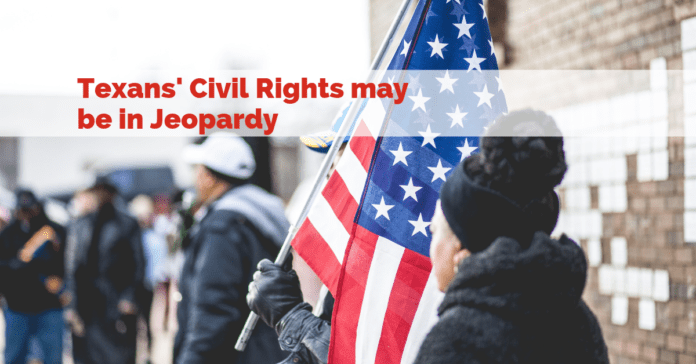 An effort to deter voter fraud, the Texas Senate voted 19 to 12 in favor of anti-voter bill SB 9.
Filed by Sen. Bryan Hughes (R-Mineola),  SB 9 will harden laws related to mail-in ballots and voter assistance and stiffen penalties for mistakes made on voter registration applications. Providing assistance to other voters – the disabled or elderly under certain guidelines – will also potentially be considered a criminal offense.
Providing false information is currently a Class B misdemeanor, but under the new bill it would be a state jail felony.
One provision of the bill would eliminate the requirement of intent for certain election-related offenses,  making it easier to prosecute those who have made honest mistakes. SB 9 creates additional barriers to already stringent voter registration guidelines and penalizes people who might unknowingly make honest mistakes during the voting process. Progressive groups fear the bill will evoke fear amongst voters. Where the past election had an increased voter turnout, some fear this bill would drive people away.
SB 9 may be particularly detrimental to those who complete provisional ballots. The process would affect people who believe they are eligible to vote and cast a ballot to be held until their eligibility is approved. Those who vote in a wrong precinct will also be penalized. People who unknowingly cast a vote pending approval could be prosecuted.
The bill grants immunity to law enforcement officials who commit election-related crimes during a prosecution or investigation.
Two other bills threaten to infringe upon educators’ right to freedom of speech and limit their ability to teach students about politics. SB 1569, authored by Sen. Pat Fallon (R-Prosper), and SB 904 by Sen. Bryan Hughes (R-Mineola), both deal with “political advertising” laws aimed at limiting the ability of school district employees and school board members to talk about political matters while they are on school grounds. Electioneering on school time and with school resources will be illegal – this means, anyone who advocates for or against a candidate in any way. Private conversations with co-workers about political matters would be also be subject to criminal penalties.
SB 904 includes provisions prohibiting the use of public communications systems such as WiFi networks and mobile devices to access political advertising. Teachers who use their personal devices after hours, but while on school property would be penalized.
Public resources cannot be used for electioneering or other political advancement activities, but such activity is already prohibited under state law. Expanding the current law in an attempt to limit the speech of educators as proposed by SB 904 and SB 1569 raises serious concerns about potential violations of the First Amendment.