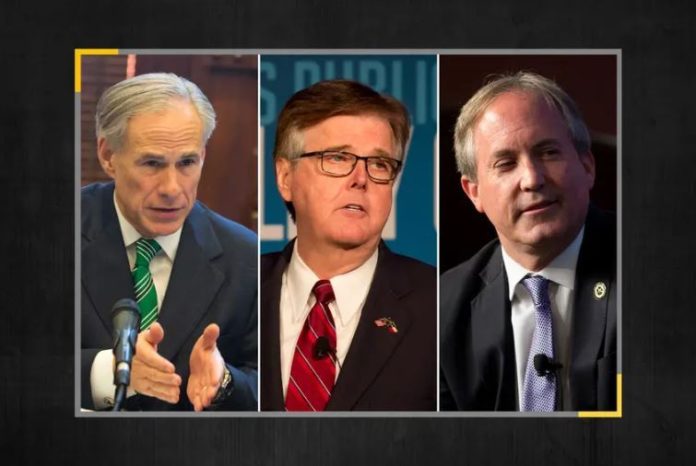 Editor’s note: This story has been updated to include a comment from Lt. Gov. Dan Patrick’s office.

Three of Texas’ top Republican leaders are vigorously fighting efforts to expand mail-in voting during the coronavirus pandemic, arguing it will lead to increased voter fraud, yet all three have themselves cast absentee ballots at least once in past elections.

Lt. Gov. Dan Patrick — then a state senator — voted by mail in 2007 for a May Houston municipal election and an ensuing runoff, though Harris County records show his first mail-in ballot was rejected because of a signature verification issue. Patrick is a regular voter in both local and state elections and favors casting his ballot during the early voting period. He’s been voting in Montgomery County since 2017.

Although he’s a regular in-person voter in Collin County, Texas Attorney General Ken Paxton used the voting-by-mail option to cast a ballot in a 2011 municipal election, according to county records. In recent elections, he’s opted for voting early.

Travis County election records show Gov. Greg Abbott cast a mail-in ballot in a 1997 special election when he was a justice on the Texas Supreme Court. Abbott consistently votes in local and state elections.

Paxton’s office has been locked in legal fights on multiple fronts in state and federal courts to block an expansion of voting by mail during the coronavirus pandemic, and thus far his office has successfully convinced appellate courts to close the legal door on allowing more voters to qualify for mail-in ballots.

Patrick recently referred to those expansion efforts as a “scam by Democrats to steal the election,” saying there was no reason anyone under 65 should be “able to say I am afraid to go vote” during the pandemic. Texas allows all voters who are 65 and older to qualify for ballots they can fill out at home and mail in. (Patrick was not yet 65 when he voted by mail.)

Those under 65 can vote by mail only if they meet a narrow set of restrictions: if they’ll be out of the county during the voting period, if they’re confined in jail but otherwise eligible, or if they have an illness or disability.

“Lt. Governor Patrick has repeatedly said that those who are eligible under Texas law to vote by mail should continue to do so — including those over 65, the disabled and anyone not in the county or city during the election,” Sherry Sylvester, a spokesperson for Patrick, said in a statement. “What he opposes is expanding vote by mail to everyone on the premise that the fear of contracting coronavirus is a disability.”

Representatives for Abbott and Paxton did not respond to requests for comment.

Democrats, civic organizations and multiple voters have filed several lawsuits against the state, saying it’s dangerous to require people to wait in lines and cast ballots on machines shared with other voters while the virus remains in circulation. Their arguments have focused not on the fear of contracting the virus, but whether a lack of immunity qualifies as a disability under the state’s election code.GOP state officials have opposed the effort, arguing in part that mail-in voting should remain limited because it is vulnerable to fraud.

There are documented cases of fraud in mail-in voting in Texas. But like voter fraud overall, it remains rare.

Still, the Texas Legislature has taken action to address weaknesses in the system in the recent past. State lawmakers passed a measure in 2017 to widen the definition of mail-in ballot fraud, boost penalties for certain offenses and strengthen rules for signature verification on mail-in ballots. The legislation, which Abbott signed into law, also requires local election officials to notify voters when their ballots are rejected and limits who can assist voters using the vote-by-mail option.