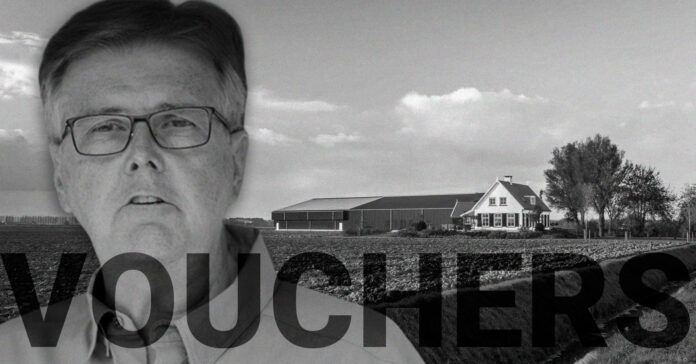 With support from Governor Abbott and Lt. Governor Dan Patrick, school choice in the form of vouchers have been advanced as a policy issue throughout both candidates’ campaigns. Abbott came out in favor of private school vouchers earlier this year while Patrick has long been in favor of vouchers. The Lt. Governor stated his position in a May 11 press release when he said, “I have long advocated for parents’ right to exercise choice in the education of their children. Since I was elected Lt. Governor, the Texas Senate has twice passed education choice legislation.”

Reacting to a spate of rural Texas community engagements by challengers Beto O’Rourke and Mike Collier, both Abbott and Patrick have expressed concern over the rural Texas vote. Patrick went so far as to launch a rural Texas bus tour in order to engage those voters in the upcoming November 8 election.  What he found was that rural Texans by and large don’t support private school vouchers.

Patrick’s latest tactic is to propose “bracketing out” rural texas schools from any proposed voucher program. Speaking on The Chad Hasty Show in Lubbock, Patrick said “if a school choice bill passes it will focus on our big cities and big districts” indicating that “for the most part rural families like their schools.” When it comes to the implementation of vouchers, Patrick said, “We’re talking about our failing dropout factories in Dallas and Houston and Austin and San Antonio.”

Not everyone responded positively to Patrick’s idea to exclude rural Texans from a voucher program. Challenger Mike Collier called Patrick’s comments days before the election a “last minute, hollow campaign promise designed to save himself.” Barry Haenisch, the Executive Director of the Texas Association of Community Schools is dubious. Haenisch, who represents over 600 small and rural school districts said, “Over the years rural educators have learned to be wary of political promises during a campaign. October and November promises too often are forgotten during a session.”

Still others are concerned that rural Texans will not really be exempt from paying for vouchers, even if they can’t use them. “It’s still taking money from the public trust and giving it to private schools,” said Charles Luke of the Coalition for Public Schools. “Taxpayers support public schools all over the state in a number of ways,” Luke said, “and for those rural districts that pay into recapture, vouchers means that their community will now be subsidizing some wealthy person’s private school tuition in another part of the state.” Over 160 school districts pay money back to the state in the form of recapture or what has been called the “Robin Hood” system. Many of those districts are in rural areas.

Rural legislators also have concerns about Patrick’s plan. At least one rural Texas legislator who preferred not to go on record during the election, expressed concern that such a move would be “the camel’s nose under the tent” and that vouchers would ultimately be expanded to apply to other areas. “It won’t be long,” he said, “before we will have to apply vouchers to a struggling school in a rural area and then expand them to make them available to everyone.”

Whether or not rural schools could even be bracketed out of a voucher plan remains up for debate. There would likely be challenges to any such system on the grounds of its discriminatory nature against rural parents. “Patrick’s pitch for vouchers is not new,” said Monty Exter of the Association of Texas Professional Educators. “Whether it’s bracketing to poor students, or special education students, or urban students; there is a long history of falling back on a NIMBY (not in my back yard) voucher when you can’t sell a universal one.

While the move may be a political calculation on the part of the Lt. Governor, many people across the state remain unconvinced. “This plan has all of the markings of someone trying to peddle a faulty product,” said one political pundit. “If vouchers are so good then why do you need to exempt certain communities from them?”