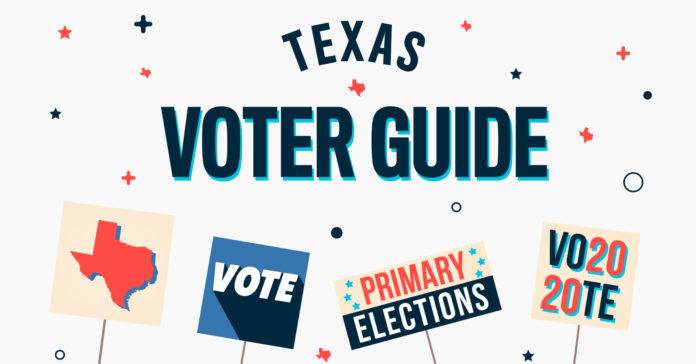 The 2020 primaries are underway, and early voting begins in Texas on Tuesday and lasts through February 28.

Starting Tuesday, Texans will be able to cast their ballots in the state primaries, conferring their votes to candidates from the presidential primary to the down-ballot initiatives for eventual party nominations. However, with the anticipation of early voting comes the concern of many over a general lack of knowledge on voting rules in Texas.

Here at Reform Austin, we have created a voter guide to break down all the information you need to vote in Texas.

To be eligible to vote in the state’s presidential primary elections, all Texans must be 18 years or older and have been registered to vote as of February 3. To check your voter registration status, you can visit this website.

In Texas, registered voters are able to vote in either party’s primary. Due to Texas being an open-primary state, all Texas voters can decide which party’s primary they will vote in.

However, once a voter has cast their ballot in either the Democartic or Republican primary, if a runoff is held, Texas voters will then only be able to vote in the runoff of the same party as their initial vote.

In Texas, different parties will have different primary voting locations.

To find your polling location, visit this link or check your local County Clerk’s website.

In order to vote in person, all Texans must bring an accepted form of photo identification.

Any voter who is experiencing issues at the polls or is unable to provide an accepted form of photo ID may vote by requesting a provisional ballot.

During early voting, Texans can vote at any polling location within their county.

But some Texans may have to vote in their specific district on election day, March 3, because only some areas let voters vote in at any polling location within their registered county.

Not all Texans will be voting in person during the primary. If you are over the age of 65 or are not in the county during the voting period, you can request a ballot by mail 11 days before the election. In order to receive a ballot by mail for the March 3 primaries, an application must be received by Friday.

The ballot then must be received by the early voting clerk’s office by 7p.m. on Election day.

The official application for early voting by mail is available at the Texas Secretary of State’s website.