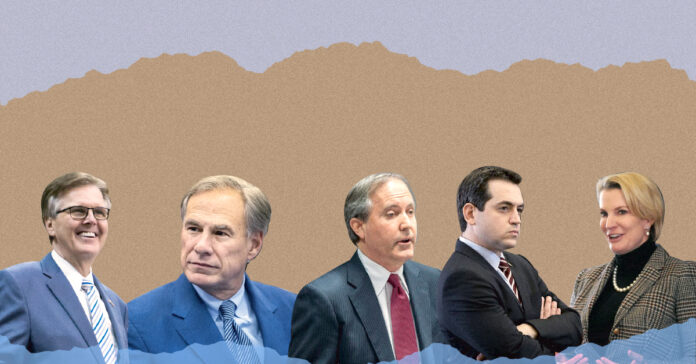 The show opened with Montgomery County Judge Mark Keough, who stated that “Montgomery County is the home of common sense, which is why you’ll never see mask or vaccine mandates.” He then led the crowd in an ultranationalist prayer.

“[Lord] we are asking you to hear from Heaven and answer one prayer: That you would bring back to us the greatest president who has ever lived, Donald Trump. Father, the president who gave us a taste of real freedom. The president who showed us the value of true American citizenship by closing our borders. The president who was most pro-life and religious liberty-minded.”

It’s also worth pointing out that the few Black people visible on the stage were all wearing identical “Blacks for Trump” shirts. The Blacks for Trump group follows the former president on tour and was founded by a member of a violent anti-Semitic cult. Putting them front and center for the rally was a telling choice.

Keough was followed by the Chair of the Texas Republican Party, Mark Rinaldi. He was proud of the Texas legislature for passing a law that ensures “2020 will never happen again here,” which is weird considering that Trump won Texas. He then descended into using actual Nazi propaganda terms while castigating Democrats.

“We are the bold party of Donald Trump, and we will stay that way. We’re not just going to be a speed bump on the road to socialism, no. When President Biden, Kamala Harris, and Nancy Pelosi destroy our economy, open our borders, defund our police, force vaccines, no. When they deprive our children of a normal childhood, we’re going to take the fight directly to them and go on offense…We’re going to fight to secure the southern border against the invasion that threatens our state… we are fighting to ban critical race theory and all neo-Marxist ideology from our schools. We want to teach our children that America and capitalism are among the two greatest gifts God ever bestowed on our planet.”

Next was State Sen. Dawn Buckingham of Abilene, who is also running for land commissioner. She started by praising Trump’s treatment of the Angel Moms, a group dedicated to telling people of Americans killed by undocumented immigrants. Sometimes they also get disinvited from rallies because their members descend into anti-Jewish conspiracy theories. After admitting and laughing about the fact that Trump is caught lying to the American people tens of thousands of times, she elevated him to religious savior status.

“He stood in the way of the devil to protect our country,” she said.

Next was Agricultural Commissioner Sid Miller, who has now done an impression of the governor from The Best Little Whorehouse in Texas for so long it appears he cannot stop. He told an admittedly pretty funny and slightly dirty joke about a chicken coop before launching into a screed declaring all non-Trump supporters traitors to the country.

“When you go down the [ballot] ask yourself if the candidate has endorsed Donald Trump for 2024. That will tell us who the real patriots are, alright?” he said. “I’ve decided that this election, this midterm election and the following 2024, it’s no longer about Republicans and Democrats/ It’s no longer about conservatives and socialists. You know what it boils down to folks? It’s a race between patriots and traitors. It’s that simple.”

Between the curtain-jerkers and the mid-card, the rally played the theme music of WWE’s The Undertaker. It was probably a nod to the legendary grappler, who lives in nearby Houston and supported Trump in 2020. However, the specific song they played was “Graveyard Symphony,” which ‘Taker used during a heel turn where he literally kidnapped wrestlers and brainwashed them into his dangerous cult that eventually formed an alliance with the moneyed interests who run the show.

Attorney General Ken Paxton took the stage after the break, and right off the bat he sounded like a supervillain. In a recollection of the Trump administration, he asked the audience: “I want you to imagine the world fearing us.”

Eager to take the heat off of his myriad legal troubles, Paxton accused the Biden Administration of coming for our children.

“It was just a few short months ago, I think probably many of you will remember this, our Attorney General of the United States came out and told the FBI that they needed to put together groups of agents to investigate parents for speaking out at school board meetings on Critical Race Theory,” he said. “In my entire life, I have never felt like I was in Germany in the ‘30s or communist China.”

This is not a thing that actually happened. Attorney General Merrick Garland is investigating far-right extremists who have been disrupting school boards and threatening them with violence. IN Paxton’s defense, book banning and attacking progressive education, which he is clearly cheering on in this quote, is definitely what happened in Nazi Germany.

Paxton closed with cheering the fact that he is suing the Biden Administration for accepting refugee children from Central America. In general, those children are threatened by poverty and violence, mostly brought about by the fact the United States has been helping to topple their governments and train their far-right death squads for decades.

Governor Greg Abbott was easily the least offensive top Texas Republican on stage at the rally. At one point he was even booed by the crowd. His only quote of note was claiming that Trump is a staunch defender of the Second Amendment unlike President Joe Biden and former president Barack Obama, despite the fact that Trump instituted more gun control than Obama and Biden combined.

His Lieutenant Governor more than made up for Abbott’s comparative reasonableness. Dan Patrick helped out on the Trump campaign in both 2016 and 2020, and he lost no time fearmongering and spreading the lie of election fraud.

Fascism is generally obsessed not only with nationalism, but also the idea that the system has been corrupted from the inside by poisonous leftists. The solution generally offered in the fascist paradigm is authoritarianism because the alternative is eradication. Patrick’s remarks fit this narrative perfectly, and it’s clear that he wants to make Texas a bastion of far-right extremism by riding Trump’s coattails.

“I know the people in this state, I believe the people in this country, will not let the socialists take our American freedom and liberty from us,” he closed with. “The world looks to one state for its last hope, and it’s Texas.”