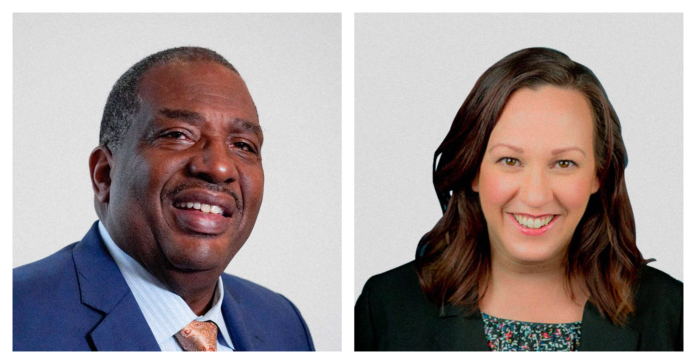 Could the momentum of the Black Lives Matter movement boost the chances for Texas Sen. Royce West (D-Dallas) in his quest to win the Democratic nomination next month and take on incumbent GOP U.S. Senator John Cornyn in November?

With 30 years of service in the Texas Senate,  West has seized the chance to promote his long record of battling racial bias and fighting for criminal justice reform. These issues have gained prominence among most Americans following the death of George Floyd, a black man killed by a Minneapolis police officer who kneeled on his neck for nearly nine minutes during an arrest.

Whether it will be enough to boost his campaign in the Democratic primary runoff against former Air Force combat pilot MJ Hegar of Round Rock, a formidable opponent with a large war chest, remains to be seen. The winner will face Cornyn in the Nov. 3 general election.

Hegar has maintained a fundraising advantage over West throughout the primary contest and heading in the July 14 primary runoff. In the first quarter of 2020, she raised $1.6 million compared with $228,400 brought in by West. She also has the financial backing of the influential VoteVets PAC and finished first in the crowded field of 12 Democratic contenders in the March 3 primary.

A Dallas Morning News-University of Texas at Tyler poll conducted in April further favors Hegar, who had a 50% lead over West among Democrats, 32 -16 percent with 44 percent undecided.

Hegar’s support comes largely from white, older and independent voters, while West is favored among black and young voters.

West has stuck with his strategy and attended many Black Lives Matter demonstrations in the hopes of channeling protestors’ anger into voting enthusiasm. In a recent interview, he said that his message and record of advocacy for racial justice, including authoring Texas’ body camera law, is resonating with voters.

“If Sen. West’s message resonates with Democratic voters who want to convert the protest energy in the state into policy change, he might get traction with core progressive voters who want to see a nominee who has experience putting words into action,” said University of Houston Political Science Professor Brandon Rottinghaus.

“Converting protest energy to electoral support can work, but it takes time to work, and time is not on Sen. West’s side,” Rottinghaus said.

West can count on “stalwarts of the Democratic Party,” including black women and other minority voters as well as young progressives, according to Michael Adams, professor and interim chair of political science in the Barbara Jordan-Mickey Leland School of Public Affairs at Texas Southern University.

“In general, we don’t usually get a high turnout for a primary runoff, so if Senator West can turn the anger and energy of protestors into voting, and bring out enough voters, he could win.”

Although Hegar was quick to lash out against racial bias and police brutality, West has begun looking past her to take aim at Cornyn.

West also attacked Cornyn’s refusal to support removal of Confederate statutes and remaining military bases. He acknowledged Cornyn’s announcement to file legislation to make Juneteenth a national holiday but with a too little, too late swipe.

“With all due respect, I’m glad Sen. Cornyn has awoken to some present realities,” West stated. “However, he’s still not ‘woke.’ And there is a difference.”

Whether West can make it far enough to worry about a battle against Cornyn has taken on another wrinkle as an influential group of black Texas Democrats have accused National Democratic Party leadership of trying to hurt West’s chances.

The Texas Coalition of Black Democrats, a group representing about 10,000 black Texas Democrats, claims the Democratic Senatorial Campaign Committee is trying to “cheat” West and deny him the opportunity to become Texas’ first black U.S. Senator.

Although the DSCC has endorsed Hegar, it denied it is trying to block donations to West’s campaign and deny him the nomination.

The DSCC had endorsed black candidates in other states, including Jaime Harrison in South Carolina, the Rev. Raphael Warnock in Georgia and Mike Espy in Mississippi.

Both candidates have received endorsements from high-profile individuals and organizations. Hegar’s include former Democratic presidential contender and U.S. Sen. Elizabeth Warren as well as groups largely supported by women, such as Planned Parenthood, NARAL and Pro-Choice America.

West’s endorsements have come from the Texas American Federation of Teachers and Communications Workers of America, Democracy for America, the Congressional Black Caucus PAC and Carol Moseley Braun, the first black woman to serve in the U.S. Senate.

What Is a Land Commissioner and Who’s Running for the Open...

On the Road for Governor? Beto O’Rourke is on a Statewide...