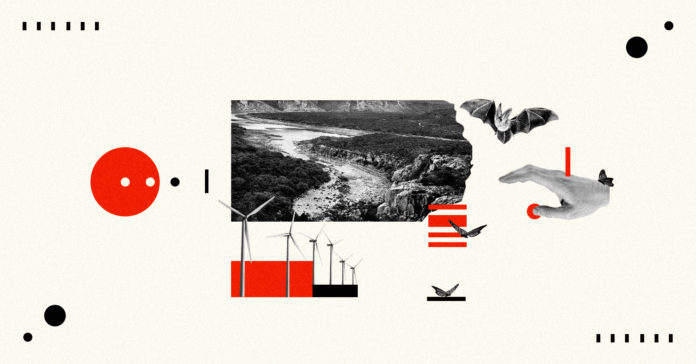 The tense trade duel between the world’s two superpower economies is being felt everywhere. The United States was the latest to move a pawn in the game as it shut down the Chinese consulate in Houston last week. The State Department cited myriad allegations ranging from commercial espionage and intellectual property theft to the abuse of diplomats, nongovernmental organizations and journalists by the Chinese government.

The trade war and gross mistrust between the globe’s two largest economies are playing out in rural Texas, too. Amid the seemingly benign industry of renewable energy — where towering turbines in the dry, gusty western portion of the state convert strong winds into power — a former member of the Chinese People’s Liberation Army is making his play.

The Blue Hills Wind Farm development is a portion of land situated on the Crockett County/Val Verde County line and the planned site for approximately 50 wind turbines. The proposed project is being fronted by GH America Energy, which is owned by Chinese company Guanghui Energy Company, which in turn is part of the Xinjiang Guanghui Industry Investment Group based in Xinjiang, an autonomous region in China. The region has gained international notoriety due to the formation of Chinese Communist Party re-education camps where ethnic Muslim Turkic Uighurs are detained and “re-educated.”

And the man behind these companies is Sun Guangxin, a former member of the PLA and one of the wealthiest individuals in China. As of July 21, Sun’s net worth was $1.9 billion, according to Forbes.

With Sun’s presence in the area and the development of the wind farm looming, security and safety issues have been ringing in the ears of locals and elected officials.

“You’ve got environmentalists, you got ranchers, you have everybody that sort of would be at odds with each other on different sides of the aisle, we’re all on one side now,” said Val Verde County Judge Lewis G. Owens Jr. “And then you’ve got the wind farm on the other side.”

The county’s primary concern is Laughlin Air Force Base. The facility is the county’s largest employer and is arguably the U.S. Air Force’s top pilot-training location.

Data from the Texas comptroller’s office revealed that Laughlin Air Force Base contributed a minimum of $2 million to the Texas economy in 2019 and is responsible for the employment of more than 10,000 people in a county with a population of 49,000.

“Laughlin AFB is one such installation designated in part 802 of CFIUS regulations,” the letter stated. “This installation houses the training grounds for our world-class Air Force pilots, many of whom are future F-35 and B-21 pilots.”

According to the Treasury Department, the Committee on Foreign Investment in the United States (CFIUS) Real Estate Instructions Part 802 state that as of February 13, CFIUS has possessed the authority “to review certain transactions involving the purchase or the lease by, or a concession to, a foreign person of certain real estate in the United States … and that are in and/or around specific airports, maritime ports, or military installations.”

The three lawmakers are worried about a project reportedly connected to the Chinese Communist Party sitting so close to a military base and potentially threatening national security.

Val Verde County’s top administrator believes action by the federal government is one of the keys to preventing the development’s momentum.

“We can all agree that more government is not really always the answer,” Owens said. “As a matter of fact, we have a tendency to sort of screw (expletive) up. Everybody always wants less government, but in this case, I think more government is what we need. It needs to be stopped at the federal level and they need to take a look at it. You don’t have anybody in the community saying, ‘Ah hell, we need this.’ They need to listen to us and not listen to, basically, the Chinese.”

GH America Energy told Reform Austin via email that the Blue Hills development is in a preliminary phase and that it’s working closely and openly with all stakeholders including Laughlin and the Defense Department.

“We are still at the early stage of development for the wind project, conducting feasibility studies,” wrote Stephen Lindsey, vice president of government and regulatory affairs at GH America Energy, in the email.

Blue Hills wouldn’t be the first wind energy facility in the area. The 66-turbine Rocksprings wind farm in Val Verde County went online two years ago. It is owned by a partnership between French renewable energy company Akuo and Masdar, a renewable energy business that is part of the platform of the Mubadala Investment Management Company based in the United Arab Emirates.

The counties in the region are desolate, vastly unspoiled and sparsely populated but rich in unique flora and fauna and North American ancient history. They’re a hunters paradise as well. Any encroachment on the air, rivers and land by an energy company could disrupt the ecosystem and region’s historical integrity.

The environmental nonprofit group Devils River Conservancy seeks to protect the impressive and pristine Devils River — the purest in the southwest, states the organization — that runs through Val Verde County. It has been fighting these renewable energy projects for several years.

“The conservancy, we’re not against pursuing alternative energy sources at all,” said Randy Nunns, board president of the Devils River Conservancy. “What we’re saying is pursue it but don’t blow it by putting these things in the wrong place.”

The environmental group has been running a “Don’t Blow It” campaign to promote awareness of the situation and to prevent these wind projects from impinging the Devils River.

Nunns said GH America Energy told the Electric Reliability Council of Texas — operators of the electric grid and managers of the deregulated market for most of the state — its turbines will be the tallest in the United States. Seven-hundred feet in height to be exact, reported the National Wind Watch, a watchdog group that monitors the large-scale wind farm industry. The Tower of the Americas in San Antonio is 750 feet tall. The Rocksprings wind project has towers in the range of 450-500 feet.

But what Nunns really finds frustrating is the ineffectiveness of the federal regulations created to protect the environment from wind project developments. He said there isn’t any oversight, and it’s basically checking some boxes and stating that you have studies on file — studies that aren’t public.

“It’d be nice to have some transparency just overall in the industry,” he said.

Other states have begun to regulate the renewable energy industry, prompting companies to locate their wind farm development projects in Texas, Nunns said.

The conservancy’s concern is also the protection of the Monarch butterflies, birds and bats that fly there annually. But that issue hasn’t seemed to resonate with others.

Several ranch properties — more than 130,000 acres — in Val Verde County were purchased through an east Texas intermediary named David Frankens who flipped them to Sun’s GH America Investments Group, Nunns said. Frankens is listed as the registered agent for multiple businesses in Texas, including one called Frankens Val Verde LLC, according to the Texas Comptroller’s Office.

Sun’s company owns property on both sides of the Devils River stretching west to the Pecos River, Nunns said.

He also said that the company has indicated the location of the Blue Hills project is probably the best choice because it is situated on the northernmost segment of the company’s landholdings and the farthest away from the Devils River and Laughlin.

However, their other land parcels — which Nunns said GH America Energy is planning on developing — are farther south and closer in proximity to the river and base.

In 2019, Sun Guangxin met with concerned stakeholders at a ranch in Val Verde County, Owens said. He assumed they were going to discuss local apprehension about the project. An attorney who was present indicated it was an icebreaker.

“We met with him. I thought we were going to go and visit,” Owens said. “Hell, it turned into a drinking session. All they wanted to do was drink and eat in the middle of the day … It was nothing but a show.”

Sun has tried harder to get their approval and is more sensitive than the Rocksprings project group was, Owens said. The feeling in Val Verde County is that the Blue Hills project will prevail and more than 50 “Tower of Americas” will dominate the rural and rugged landscape of the area potentially impacting the ecology and local economy.

“It’s definitely a profit play … so he’s going to build it and get U.S. tax subsidies to help make it profitable, but he doesn’t suffer the consequences of having to look at it,” Nunns said. “Some people don’t want to pay top dollar for a deer lease if they’re in the shadow of a 700-foot turbine.”